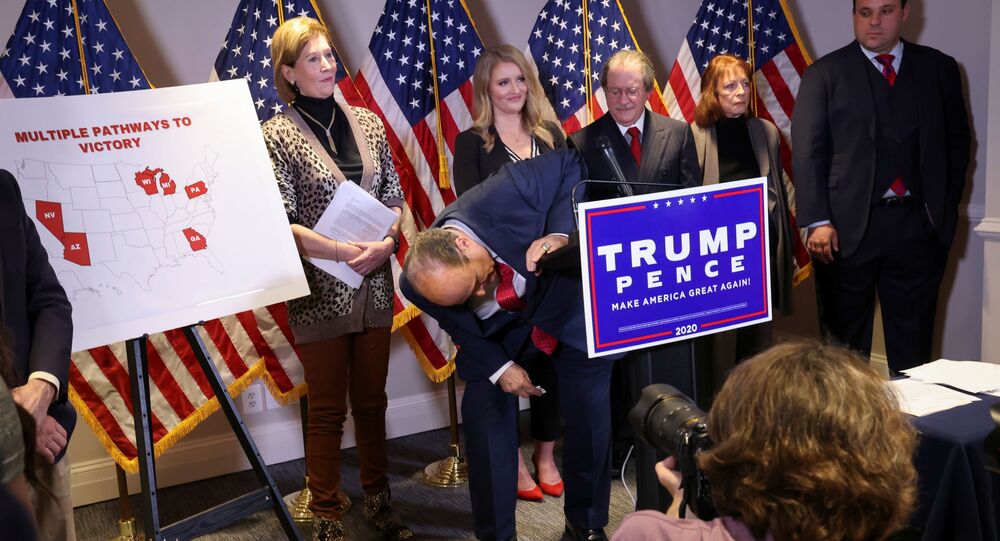 Every major US media outlet has already projected Joe Biden as the winner of the November 3 election. Overall, Biden has won 79.6 million votes (51%) to Trump’s 73.6 million (47%), as of Thursday evening. However, Americans do not elect their president based on national popular vote, but via a format called the Electoral College which apportions 538 electoral votes across every state. Biden has been projected to capture 306 electoral votes, well above the 270 minimum threshold.

Each state, which has its own internal deadlines, must certify results by the December 8 federal deadline before chosen electors meet on December 14 to formally cast votes.

The Trump campaign in addition to state-specific challenges, has asked the Justice Department to probe Dominion Voting Systems, which they have claimed deleted and reversed votes in Biden’s favor.

"As we started investigating... what emerged very quickly is there's not a singular voter fraud in one state," Trump lawyer Rudy Giuliani said during a press conference on Thursday. "This pattern repeats itself in a number of states, almost exactly the same pattern, which to any experienced investigator [or] prosecutor would suggest there was a plan from a centralized place to execute these various acts of voter fraud specifically focused on big cities."

All 67 counties must certify official results by November 23, per state law, in Pennsylvania, which Biden won by 82,100 votes (1.2%). On Thursday, US Judge Kevin Brobson invalidated 2,349 mail-in ballots cast in Allegheny County because they did not have date marks, a court document revealed.

Earlier this week, a judge cast doubt upon the campaign’s request to invalidate corrected ballots during a hearing in which Giuliani alleged the Democrats had launched a nationwide conspiracy to steal the election. Trump’s lawyer acknowledged that the lawsuit was not about voter fraud but violations of civil liberties. The judge has yet to rule on the case.

On Monday, the state supreme court shot down a lawsuit claiming Republican representatives were kept too far away to observe ballot counting in Philadelphia.

Michigan Secretary of State Jocelyn Benson said all 83 counties have voted to certify the results of the November 3 election. Next, the Board of State Canvassers meets November 23 to issue final certification. Biden won the state by roughly 155,000 votes (2.8%).

This came after the canvassing board of Wayne County, Michigan’s most populous, on Tuesday, was initially unable to certify the results because 2 Republican members of the 4-person panel cited irregularities. However, hours later the board members reached a compromise to overcome the 2-2 partisan deadlock. Then, on Wednesday, the two Republicans tried to rescind their approval, claiming they made the decisions under duress after death threats. They also alleged the state would not conduct a proper post-election audit, which Benson refuted.

Biden won 68% of the vote in Wayne county overall, which includes the city of Detroit, where more than 850,000 ballots were cast. Republicans targeted ballots cast in Detroit specifically, where Biden had garnered 80 percent of the votes.

On Thursday, Trump’s legal team said the campaign dropped a court challenge in Michigan because the goal was achieved.

"This morning we are withdrawing our lawsuit in Michigan as a direct result of achieving the relief we sought: to stop the election in Wayne County from being prematurely certified before residents can be assured that every legal vote has been counted and every illegal vote has not been counted," Giuliani said.

Despite dropping the lawsuit, it appears Trump has not given up. The president reportedly invited Michigan lawmakers to the White House for a meeting on Friday. Some Republicans raised the issue of the state legislature intervening to overturn the results in Trump’s favor. However, the notion was shot down by Michigan state Senate Majority Leader Mike Shirkey on Tuesday, according to local media.

Georgia’s secretary of state on Thursday announced that a hand recount of votes reaffirmed that Biden was leading Trump. The final count showed Biden winning by 12,780 votes (roughly 0.2% of the total). The state by law is supposed to certify results by Friday (November 20) at 5:00 p.m. EST (10:00 pm. GMT).

Earlier in the day, Giuliani alleged that in the city of Atlanta Republicans were not allowed to inspect the absentee mail-in ballot processing. He added that the campaign has evidence of "numerous double voters", "out-of-state voters" and "specific evidence of intimidation and changes of vote." He said the campaign will file a new lawsuit.

Biden won Wisconsin by only 20,608 votes (0.6%), which faces a December 1 certification deadline.

On Wednesday, the Trump campaign paid $3 million for a recount in two counties: Milwaukee and Dane, where Biden won 70% and 75% of the vote, respectively. Biden won the two counties by more than 360,000 votes combined. The president’s team alleges that absentee ballots were illegally issued or altered and circumvention of state ID laws. In addition, they cited a suspicious spike in "indefinitely confined" voters.

State law requires all counties to certify votes by November 23 with the final certification by the state set for November 30. Republican lawmakers have tried to delay the certification in a state Biden is expected to win by 10,000 votes (0.3%).

On Thursday, a federal judge in Arizona dismissed a Republican Party lawsuit seeking to expand the state's election audit. This comes after a judge on November 13 rejected a request to recount Phoenix votes that Republicans claimed were improperly rejected. The campaign's lawyers conceded the small number of ballots would not change the outcome.

In Nevada, where Biden leads by more than 2% (roughly 34,000 votes), the state law requires certification to be done by November 24. Trump campaign lawyers asked a court to nullify Nevada’s election because, they claim, the use of optical scanning to process signatures violated state law and that votes were cast by dead people. A conservative watchdog filed a similar lawsuit, which a judge is expected to hear arguments about on Friday.

Tags:
campaign, vote, US Election 2020, US elections, US Election, USA, US
Community standardsDiscussion