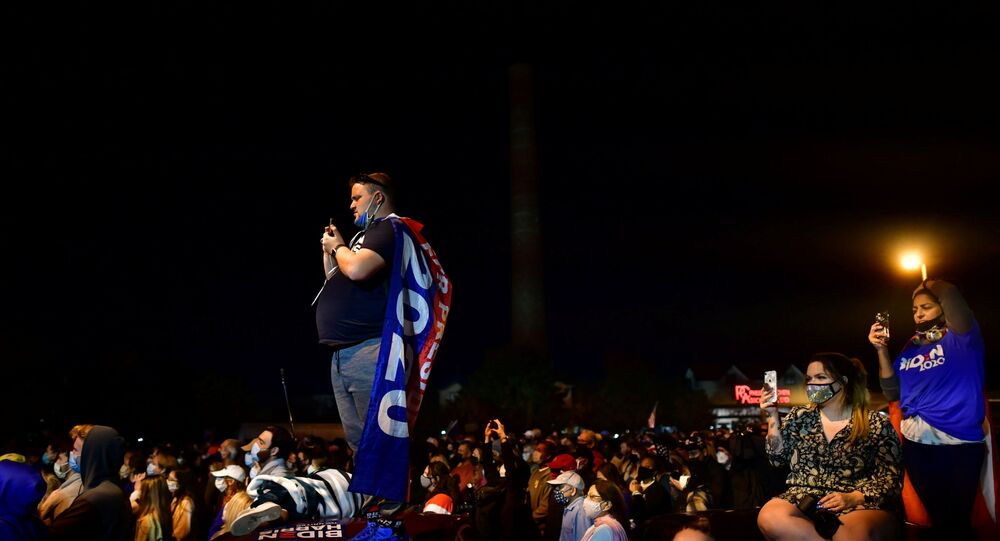 The former US vice president has announced sweeping reforms in policing, climate change and immigration after he was declared the winner of the 2020 elections by media sources, the Washington Post reported on Sunday.

Joe Biden, who has declared victory in the US presidential vote, has launched a transition plan to tackle key challenges in the US and reverse several policies from the Trump administration.

According to the Washington Post, the Democratic rival will launch a wave of executive orders after taking office to scale back several initiatives passed by US president Donald Trump and his government.

Sputnik takes a closer look at some of the top policies the president-elect plans to challenge.

Biden is set to announce on Monday members of his 12-person coronavirus task force aimed at tackling the ongoing COVID-19 crisis in the US, he said in a Saturday victory speech.

One of the top priorities in his transition plan, the task force will test more US citizens and coordinate virus suppression methods to control the pandemic, senior officials have said in recent interviews.

"Our work begins with getting COVID under control. On Monday, I will name a group of leading scientists and experts as transition advisers to help take the Biden-Harris COVID plan and convert it into an action blueprint that will start on Jan. 20," Biden said in his speech.

Former surgeon-general Vivek Murthy and former Food and Drug Administration commissioner, David Kessler, are set to lead the task force, according to US media.

The task force will also mandate wearing masks in public, with the president-elect planning to urge all US citizens to wear them outside their household and calling upon local authorities, including state governors to enforce them.

The plans come after President Trump downplayed the severity of the pandemic and failed to impose social distancing rules. To date, the US has nearly 10m reported cases and over 237,000 deaths. According to US chief pandemic expert Dr Anthony Fauci, the US "could not possibly be positioned more poorly" ahead of the winter months.

Biden's transition team has planned to rejoin the Paris Agreement amid tensions between the US and the global leaders over the former's withdrawal from the pact.

The news comes after the US formally left the Agreement on 4 November, a year after Donald Trump launched the process.

Biden also announced $2tn in investments to build green infrastructure across the country over the next four years, Bloomberg reported in July, but funding sources for the initiative has need been disclosed.

The US has faced heavy criticisms for its withdrawal from the multilateral agreement under Trump, with progressives and liberals condemning the move amid claims of an impending climate emergency.

Biden also plans to rejoin the World Health Organisation after Donald Trump announced the US would withdraw from the multilateral institution in July.

The announcement comes amid claims Trump made about the WHO's handling of the ongoing COVID-19 pandemic, namely that it had covered up alleged shortcomings in its coronavirus response and was heavily controlled by China.

US secretary of state Mike Pompeo also threatened to permanently block funding to the international body in May, raising sharp concerns among global leaders. Both China and the WHO have repeatedly and sharply denied the allegations.

Addressing Systematic Racism in the US

Joe Biden has also pledged to tackle concerns over racism as a core component of his administrative policy, WaPo reported.

His transition team aims to pass significant measures such as affordable housing for minority groups, wage equality and similar initiatives.

Further measures barring police from using choke holds and other controversial restraint tactics, which have led to the deaths of people such as Eric Garner and George Floyd, among others.

Other initiatives such as creating a national police watchdog and reducing prison populations have been proposed.

Biden will also reverse Trump's roll back of the Development, Relief, and Education for Alien Minors (DREAM) and Deferred Action for Childhood Arrivals (DACA) acts, which granted rights and relief from deportation for undocumented migrants.

The news comes as President Trump has refused to concede defeat to Biden after the latter surpassed 270 Electoral College votes on Saturday. The Trump campaign has also said it would launch a legal campaign against allegedly "fraudulent" votes and stated the the election was "far from over".