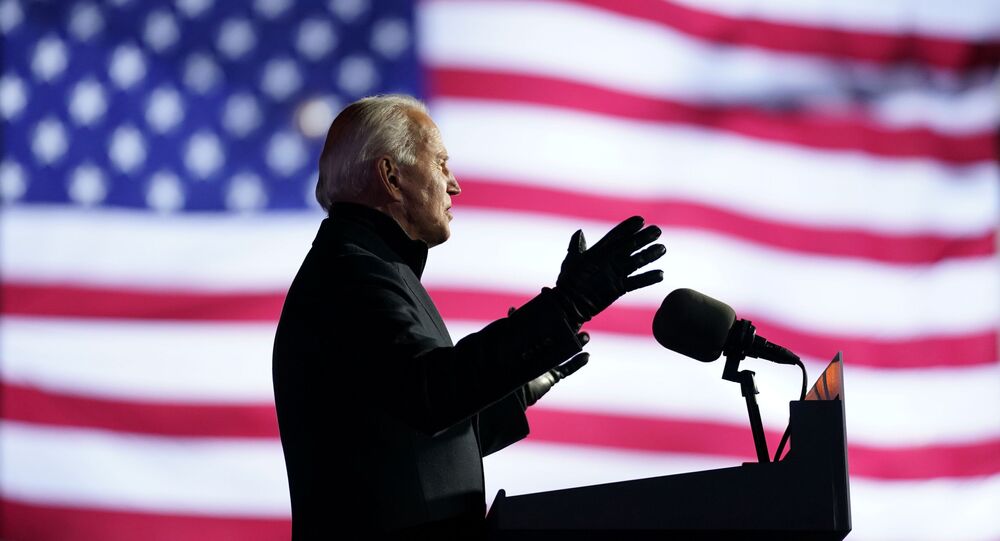 MOSCOW, (Sputnik) - As a member of the old guard and a confirmed Atlanticist, Joe Biden, who has claimed the White House, is expected to "build back" the alliances and return his country to treaties it quit under his predecessor, experts told Sputnik on Sunday.

The Democrat claimed victory in the US presidential election on Saturday, even as vote counting continued in some holdout states. Sitting US President Donald Trump vowed to keep up the legal fight against mail-in ballots he considers to be fraudulent.

But as Erika Simpson, the president of the Canadian Peace Research Association, pointed out to Sputnik that fight seems already lost. Trump’s allegations of fraud have been rejected as baseless by US experts on constitutional law who predict his challenge in the top court will be easily defeated.

A bunch of bilateral and multilateral treaties that have been axed under Trump — the Intermediate-Range Nuclear Forces Treaty, the Open Skies Treaty, the Paris accord and the Iran pact — have not been forgotten by Biden’s Democratic base four years from now.

Many of these agreements were negotiated with Biden’s help and the prospect of him going back into the treaty-making process is similarly improbable, Simpson said.

"Biden will appeal to his own democratic base and he will probably sign and ratify the treaties once more — except for the new Prohibition Treaty. The UN Treaty for the Prohibition of Nuclear Weapons will be opposed by the US because it threatens the US deterrent," she noted.

Richard Sakwa, a professor of Russian and European Politics at the University of Kent, predicted that an "old-fashioned multilateralist" like Biden will look to bring the United States back into the UN World Health Organization and, hopefully, the UN climate change deal.

He can also be expected to seek an extension of the START treaty that puts a limit on the US and Russian nuclear stockpiles, considering the landmark pact is nearing its expiry date in February 2021.

"A one year extension just to give people time, with no conditions... There's also the Open Skies Treaty, and the whole architecture of nuclear arms control. So that's number one, that's absolutely crucial, and yes, there can be cooperation," he suggested.

As an architect of the Iran nuclear deal, Biden will be expected to bring the multiparty accord back at least in some form. Iran has been scaling down on its commitments ever since the United States pulled out in 2018 and Biden may be forced to fine-tune it with the help of EU allies who want to rescue the legacy pact.

"It was one of the few foreign policy successes of the Obama-Biden team. Whether they can go back to the status quo ante, it'll be very hard," Sakwa admitted.

Reaching Out To Europe, Sidelining the United Kindom

Biden is also expected to mend his country’s frayed relationship with the European Union, which Trump reportedly said was "worse than China, only smaller." Much of the EU’s importance for the US is linked to NATO and that too will be put back on Washington’s list of highest priorities.

"His Atlanticism will reforge, of course, the US relations with NATO. He will establish NATO as a functioning multilateral security organization," Sakwa said.

As to the United Kingdom, Prime Minister Boris Johnson’s fawning relationship with Trump and his harsh remarks about Biden will not likely be forgotten, the professor said. Biden has ruled out a free trade deal with the UK if it fails to respect the Good Friday Agreement once it leaves the EU.

"The trade deal is not going to be the easiest trade deal in history… Plus, of course, all the environmental concerns that we have about the US food standards and so on. So it's going to be really tough," Sakwa said.

He stressed that Biden was in a position to bargain because the UK would mean less for the US outside the EU, where London acted as a "Trojan horse" for Washington, having never truly committed itself to Europeanism or a continental vision.

"It was useful for Washington to have the UK in Brussels at the center of decision-making. So now it's less important. Britain is more marginal, and I think that Biden's priority will be establishing close relationship with France, Germany and Italy, France and Germany, of course, the top two," he explained.

Outlooks are less certain for the US policy on China and Russia, according to Sakwa. Paradoxically, Biden has been tougher on Russia in words, rather than actions, while Trump often followed up his nice words with sanctions and went doggedly after Moscow-led Nord Stream 2 pipeline project.

"Will Biden be so obsessed at stopping North Stream 2? I'm not so sure. We do know that the whole foreign policy advisers around Biden, Michael Carpenter and others, are really critical of Moscow. Can relations get worse? They can always do. On the other hand, the paradox of Trump was that nice words were accompanied by harsh actions. And we may be in a paradoxical situation now that maybe in this case it will be the opposite – harsh words will be perhaps accompanied by not soft, but rational, normal diplomatic actions," Sakwa said.

On the upside, Biden will not feel so pressed to take a hard line on Russia as Trump who was shackled by Russiagate allegations during his entire presidency.

On the other hand, the State Department has repeatedly said there was a conflict of interests in involvement of Biden's son Hunter with a Ukrainian firm while the politician was in charge of the Ukraine policy under Barack Obama. That is going to continue dividing Moscow and Washington.

In the case of China, a lot will depend on who will become the new secretary of state, Sakwa suggested. He argued it was time the US started treating China — but also Russia — as a country with its own traditions, instead of pressing ahead with its neo-containment policy.

"Biden has made so many harsh anti-China comments. But I hope that he will be able to find a way to ensure that the relationship does not spin into conflict… Top of Biden's agenda is hopefully to reduce the heat, but it's going to be certainly one of the big issues facing his presidency and that of his successors for as long as we can say," he concluded.