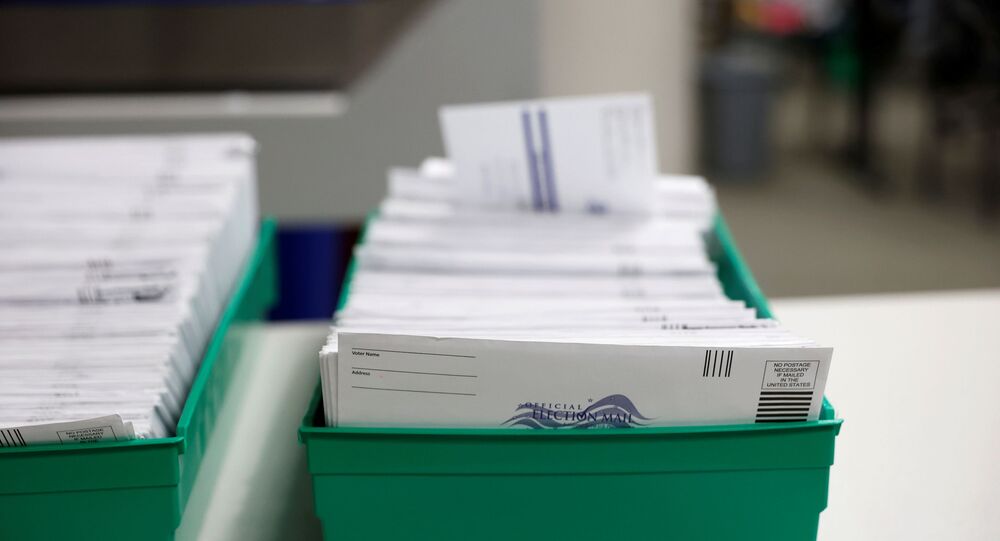 Earlier on Saturday, the pollster Edison Research reported that with about 96% of ballots counted in Pennsylvania, President Donald Trump and Democratic candidate Joe Biden have 49.2% and 49.6% of the vote in the battleground state, respectively.

O'Keefe pointed out that USPS employee Richard Hopkins from the city of Erie in Pennsylvania "went public" as the alleged whistleblower confirmed that federal investigators had spoken with him about Postmaster Rob Weisenbach's order to backdate ballots to 3 November.

Hopkins argued that he overheard Weisenbach discussing the matter with a USPS employee on Thursday.

According to him, most of the ballots that arrived on 4 November were backdated to 3 November, and that one ballot had been mistakenly stamped with the accurate date, something that was rejected by Weisenbach as "untrue".

Pennsylvania legislation envisages that mail-in ballots should be postmarked by Election Day in order to be considered valid and counted.

Hopkins' claims came after an anonymous USPS insider from Barlow Branch, Michigan told O'Keefe that local mail carriers were instructed by their supervisor to separate all incoming ballots arriving later than Election Day to be then hand-stamped with "3 November".

"We were told to collect any ballots that we find in mailboxes, collection boxes, et cetera, for outgoing mail, at the end of the day, we are supposed to separate them from the standard letter mail, so they can hand-stamp them with yesterday's date—and put them through the Express Mail system—to get wherever they need to go", the person explained

This was preceded by President Trump tweeting about alleged count irregularities in several battleground states, including Pennsylvania, Michigan, Wisconsin, and Georgia, which he argued prevented him from securing victory in the elections.

"If you count the legal votes, I easily win. If you count the illegal votes, they can try and steal the election from us", POTUS noted, adding that the issue is "going to end up, perhaps, at the highest court in the land", an apparent reference to the US Supreme Court.

"The Supreme Court decision on voting in Pennsylvania is a VERY dangerous one", he wrote on Twitter and Facebook, in what was followed by Twitter flagging the post with a "misleading" content warning. Facebook followed suit by attaching a "both voting by mail and voting in person have a long history of trustworthiness in the US" explanation related to Trump's remarks.

© REUTERS / Carlos Barria
Trump Campaign Files Lawsuits to 'Ensure Election Integrity' in Michigan, Pennsylvania, Georgia
The Supreme Court, for its part, issued an order on Friday that requires Pennsylvania counties to segregate mail-in ballots that arrived in the state after 3 November. According to Associate Justice Samuel Alito, all such ballots should be "segregated and kept in a secure, safe, and sealed container separate from other voted ballots".

Biden has, meanwhile, claimed that he is going to win Pennsylvania, amid a report by the Edison Research pollster that about 96% of ballots had been thus far counted in the battleground state and that Trump and Biden have 49.2% and 49.6% of the vote there, respectively.