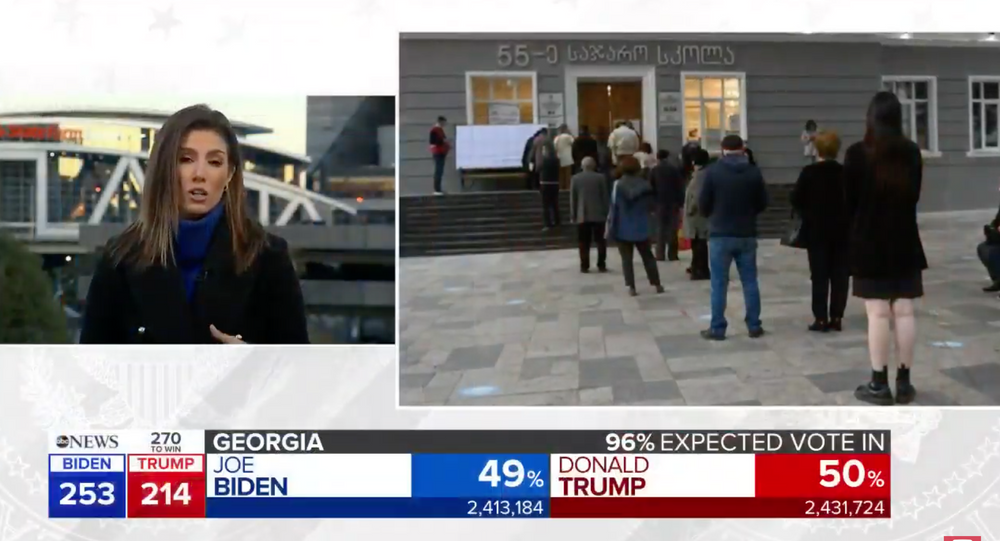 With the outcome of US presidential election in the southeastern state of Georgia still unclear, it seems like confusion prevails among the American media as well.

ABC News has raised some eyebrows among its most attentive viewers after using a photo from a parliamentary election in Georgia, former Soviet Republic located in the Caucasus region, in its coverage of vote counting in Atlanta, Georgia; the nation's name is identical to that of the American state in English.

Hilarious! America’s @ABC illustrates a piece about Atlanta, Georgia with a queue from the country of Georgia, which has also just held elections, last weekend. Check out the Georgian language script above the polling station. pic.twitter.com/lFBtHpLzAr

​On 31 October, the country held a parliamentary election, which resulted in majority of seats being claimed by the ruling Georgian Dream party. The photo, taken by a Sputnik Georgia correspondent, shows a line of voters queuing at the polling station located at school №55 in Tbilisi, according to Georgia’s First Channel, which spotted the mistake.

Even the foreign letters seen above the polling station did not raise any questions among ABC News staffers, which have used the pic to discuss ongoing uncertainty in the outcome of the US presidential vote in the swing state. Joe Biden and Donald Trump are currently neck and neck in Georgia, with 99% of ballots counted.

The lapse was quickly ridiculed online, with users noting that this mistake was “priceless” and “too funny” to go unnoticed.

RT and Sputnik editor-in-chief Margarita Simonyan said on Twitter that it was probably the “heat of election passion” that was to blame for the confusion. But some Twitter users said that ABC simply needs to chose its interns “more carefully”.

This is too funny 😂 @ABC confusing State of Georgia with the country of Georgia 🇬🇪 in its election coverag pic.twitter.com/aCXuZem013

According to Sputnik Georgia, it is hardly the first time when Americans have confused the country with the US state, located in the heartland of the 'Old South' north of Florida and known throughout the world as the setting of the 1939 film classic Gone With the Wind.