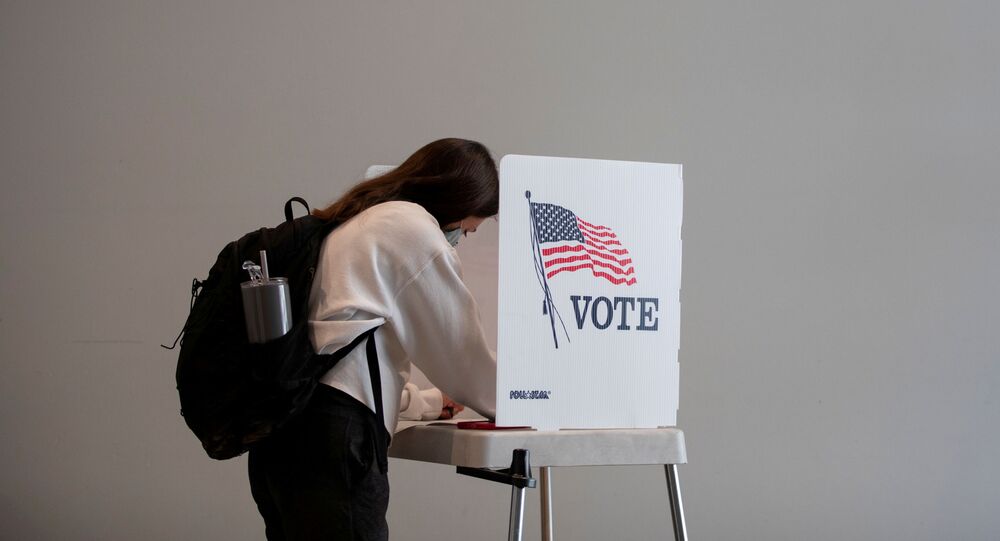 As the vote tally in the US presidential election continues, with Donald Trump currently trailing his opponent Joe Biden, having secured 214 electoral votes against the Democratic candidate’s 264, the POTUS’ campaign has denounced the counting of votes, claiming "massive cheating", and has initiated lawsuits.

Arizona election officials have been attempting to debunk the #SharpieGate conspiracy theory that has spiralled amid flaring tensions as the vote count in the US presidential elections continues.

Officials sought to allay voters’ concerns, stating that voting with a Sharpie permanent marker, like the one Trump is famously a fan of, would not have any detrimental impact on their ballots, which would still be counted by tabulation machines.

If some issue emerged, such as smudged ink or if damaged ballots could not be read by the machine, according to the state’s election procedures manual, a ballot review board duplicates these ballots.

Sophia Solis, public information officer for the Arizona Secretary of State, was cited by The Washington Post as saying in an email that emerging issues with the ballot would not result in a vote being cancelled.

“If a voter’s ballot is listed as cancelled, it usually means the voter made an additional ballot request if they needed to have their original ballot replaced. Depending on when they returned their replacement ballot, that ballot is most likely still being processed by the county,” said Solis.

Nevertheless, #SharpieGate started trending on social media, with Donald Trump supporters voicing fears that their ballots were being targeted as they were given special Sharpie markers to fill them out, rendering them invalid.

Maricopa County had been providing voters with the felt-tipped pens, claimed some Trump supporters, with the ‘deliberate intention’ to interfere with their ballots.

Amid the Sharpie complaints from Maricopa County voters, on Wednesday the Republican Attorney General’s Office in Arizona announced that they had launched an investigation.

Information on the validity of ballots filled out using the felt-tipped markers was demanded by Deputy Solicitor General Michael S. Catlett in a letter addressed to Scott Jarrett, the Maricopa County elections director. A response was requested by Thursday.

The use of Sharpie pens was defended by the Maricopa County Elections Department, which had tweeted on Election Day that voting centres used them to avoid ink smudging when ballots are counted.

However, the Sharpie pen issue escalated, as people on social media fed into the conspiracy theory that there was an allegedly underlying motive behind the decision of election officials to offer the markers at polling stations.

A video posted on social media showed a woman saying that four different polling sites were using Sharpies, with a man asking her whether “those ballots are not being counted”.

This is a problem. I personally know her, a school teacher from AZ. AZ votes not being scanned because poll workers were handing out sharpies #sharpiegate @realDonaldTrump @DonaldJTrumpJr pic.twitter.com/rFr4jbzAYK

​In the footage, that had accumulated over 821,000 views, the man is heard saying:

“They are invalidating votes is what they are doing… People are coming here to vote for Donald Trump, and all those votes are getting invalidated,” as he proceeds to advise voters to use a ballpoint pen instead.

Lobbyist Matt Schlapp picked up on the hashtag, posting on Twitter that several Trump supporters had been “stonewalled” after they attempted to verify their ballots for the President had been duly counted after they were asked to fill them out with Sharpie pens.

3 more Trump supporters just contacted me who voted in AZ w sharpies and now are getting stonewalled as they try to verify they are in Trump's tally.

This is happening in America #SharpieGate #StopTheSteal

Republican Congressman Paul Gosar tweeted on Wednesday that he was taking up the issue of the Sharpie pens with the state attorney general’s office.

This is propaganda and misleading. The issue is that hundreds of people who voted with sharpies have checked online and their votes were not counted. There may be an issue with the machines reading the sharpie. Authorization to use is not the issue and is misleading. pic.twitter.com/nuUiwm6Zt5

​Videos making similar claims about Sharpies were also widely shared on TikTok, with the video-sharing platform responding to state that claims on invalidated ballots violated its policy against misleading information concerning the elections and would be removed. Facebook also said it had blocked the Sharpiegate hashtag on its platform.

Users on Twitter posted their comments that fed into the scandal.

Just checked my ballot was canceled too, voted with a sharpie that was provided there. Sharpie was the only option

Yes this is exactly what happened to us!! My sister-in-law voted in Maricopa County yesterday in person WITH a sharpie and her ballot has a "no ballot status yet" notification. pic.twitter.com/kB2wQuADub

No. I voted by mail in Arizona. The instructions with the ballot (on the blue paper) specifically said, do not use sharpie pens, as they bleed through.

If someone didn't read the directions, there may be consequences.

​Some netizens vented their indignation and referenced Donald Trump’s once oft-used phrase “Drain the Swamp” which was a metaphor to describe his plan to fix problems in the federal government.

It’s despicable that this is America. The only way to restore America to glory is to DRAIN THE DAMN SWAMP.

​Other netizens took a different stance, suggesting that Trump supporters should have voted by mail, instead of following the President’s advice to steer clear of mail ballots as ‘ripe for fraud’.

Since MAGA people follow Trump like sheep, I'm assuming you think all the sharpie votes that WILL BE counted are his. As tempting as that is to believe, there are also lots of mail in votes and MAGA people were too scared to vote that way so we know who's winning AZ...

Some took a dim view of the entire Sharpie conspiracy theory.

Hmmm. Did people successfully vote with sharpies in the past? Were they given specifically a sharpie when voting? And will they be allowed to re-vote with a pen instead?

Are y’all capable of anything other than peddling baseless conspiracies?

​This comes as President Donald Trump's campaign announced on Wednesday that it had filed lawsuits to halt ballot counting in Michigan and Georgia, while also taking legal action to change the ballot receipt deadline in Pennsylvania.

The campaign denounced the counting of votes in the US presidential election, claiming "massive cheating", as the current tally showed Donald Trump trailing his Democratic opponent, having secured 214 electoral college votes to Joe Biden's 264.