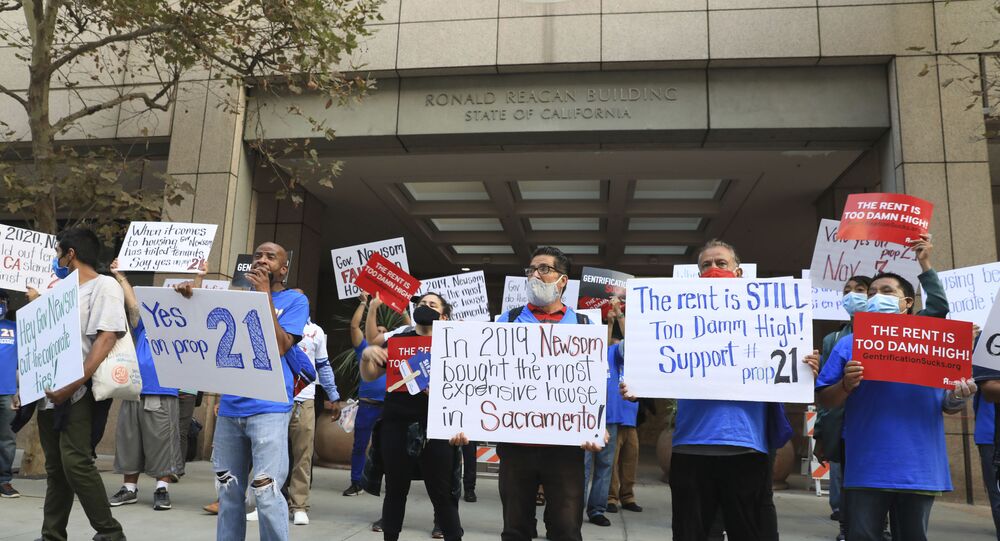 The US presidential election will not be the only thing to be decided on 3 November. There are also 35 Senate races and elections for 11 governors and many states will also be holding mini referendums on various issues.

Every four years the race for the White House coincides with a number of other elections in the United States.

Californians will be asked to vote on Proposition 21 - on extending rent controls - two years after a more radical proposal, Proposition 10, was rejected by 59 percent of voters.

Proposition 21 would allow cities to expand rent control on almost all rental housing, as long as it’s more than 15 years old. The only way to overcome CA’s housing shortage is by building more housing. Prop 21 would stifle real estate development when construction is critical. pic.twitter.com/W7EgKlq4IT

​Sarah Sherburn-Zimmer, of the San Francisco-based Housing Rights Committee, said it was "disappointing" that the state’s Governor Gavin Newsom, a Democrat, did not support Proposition 22.

Ms Sherburn-Zimmer told Sputnik: "The turnout will be much higher than in 2018 and in a high turnout election more renters vote. Proposition 10 was also confusing for renters, and the California Apartment Association only made it more confusing. Hopefully voters recognise that if we don’t do something about skyrocketing rents the housing crisis will just continue in California."

Also on the ballot in California is Proposition 22, which would exempt app-based delivery companies, such as Uber, from providing employee benefits to their drivers.

Right now, 50,000 Californians are denied a voice in our democracy – disenfranchised from voting for better schools for their kids and cleaner air and water for their neighborhoods That’s wrong, and we can fix it by supporting Proposition 17. #YesOnProp17 pic.twitter.com/NDor8evc8x

​If Proposition 17 is passed it would allow convicted felons in California to be able to vote in future.

Around the country voters - many of whom voted early, by mail - will be choosing 35 Senate seats, with the successful candidates elected for a six-year term.

The Republicans currently control the Senate by 53-47 but the Democrats could win it by winning just four seats.

Chip Felkel, a Republican strategist and critic of the President, from South Carolina, told AP this week: "I don't see how we hold it. You’d be hard pressed to admit we don’t have a Trump problem."

The Democrats’ three biggest targets are in Maine, North Carolina and Iowa.

The Republican incumbent in Maine, Susan Collins, 67, has held her seat since 1996 but she is facing a strong challenge from Sara Gideon, the Speaker of the state’s House of Representatives, whose mother was second generation Armenian-American.

Tonight marked our 40th #SupperWithSara. From our first supper in Kennebunkport to our final event in Unity, I'm so grateful for everyone who’s joined us over the past 16 months. Hearing from you has been at the heart of this campaign, & that won’t change when I’m in the Senate. pic.twitter.com/Ryt0MS9kyr

​Thom Tillis, who holds the North Carolina seat, is up against Cal Cunningham, a lieutenant-colonel in the US Army Reserve. Tillis has tried to portray Cunningham as anti-police in the wake of the death of George Floyd, but has failed to make the accusation stick.

Joni Ernst - who was elected as a Republican Senator in Iowa in 2014, after receiving generous campaign funding from the Koch brothers - is seeking to hold off a challenge from the Democrats' Theresa Greenfield.

Two of the Senate races are special elections to fill vacancies created in the last two years.

No one deserves a more thorough drubbing on Election Day than Donald Trump.

Oh, heck, all Trump lackeys deserve to be tossed out.

​In Arizona a new face will take the spot once held by Republican former presidential candidate and Vietnam War hero John McCain, who died of cancer, aged 81, in 2018, and in Georgia 75-year-old Johnny Isakson, resigned in December last year for health reasons.

The Arizona race will be a battle royale betwen two candidates with impeccable military pedigrees.

The Democrat candidate, former astronaut and retired US Navy captain Mark Kelly, 56, is fractionally ahead in the polls against Martha McSally, 54, a Republican former US Air Force pilot who was the first woman to fly a plane in combat and command a fighter squadron.

​McSally, who is on record as being opposed to abortion in "nearly all cases", successfully sued the Pentagon in 2001 after female military personnel serving in Saudi Arabia were ordered to wear the head-to-toe abaya while off-base to appease their Muslim hosts. She claimed "the regulations required her to send the message that she believes women are subservient to men.”

Voters will also be choosing new governors in 11 states.

Nine of those are incumbents seeking re-election but two are open races - in Montana, Mike Cooney will be hoping to fight off Greg Gianforte and retain the governorship for the Democrats, while in Utah the GOP will be hoping Spencer Cox can beat challenger Christopher Peterson, a professor who specialising in consumer protection law.

We need to sever the Sununu family from NH politics. Chris Sununu's father started climate denialism under Bush Sr. and the apple doesn't fall far from the tree.

​New Hampshire’s Republican Governor Chris Sununu - whose father John Sununu was a former governor and a White House Chief of Staff under George H.W. Bush - is Democrat Dan Feltes, who has won the endorsement of Bernie Sanders.

There are also elections for new governors in Puerto Rico and American Samoa.

Puerto Rico has been plagued by financial and political crisis for two years.

Wanda Vázquez Garced took over as Governor of the Caribbean island, a US overseas territory, in August 2019 after Ricky Rossello was forced to resign in the wake of the Telegramgate scandal.

Pedro Pierluisi, Puerto Rico’s pro-statehood gubernatorial candidate, has been accused of sexual harassment by his former personal trainer in an affidavit leaked early Friday. He denied the allegations.https://t.co/svEIzYPsxR

​But in August this year Ms Vázquez Garced lost the primary for her New Progressive Party to Pedro Pierluisi, who will take on the Popular Democratic Party’s Carlos Delgado Altieri.

American Samoa’s governor Lolo Matalasi Moliga is not able to run for re-election due to term limits so the race is between Gaoteote Palaie Tofau, president of the island’s senate, and Lemanu Palepoi Sialega Mauga, who is the Lieutenant Governor.