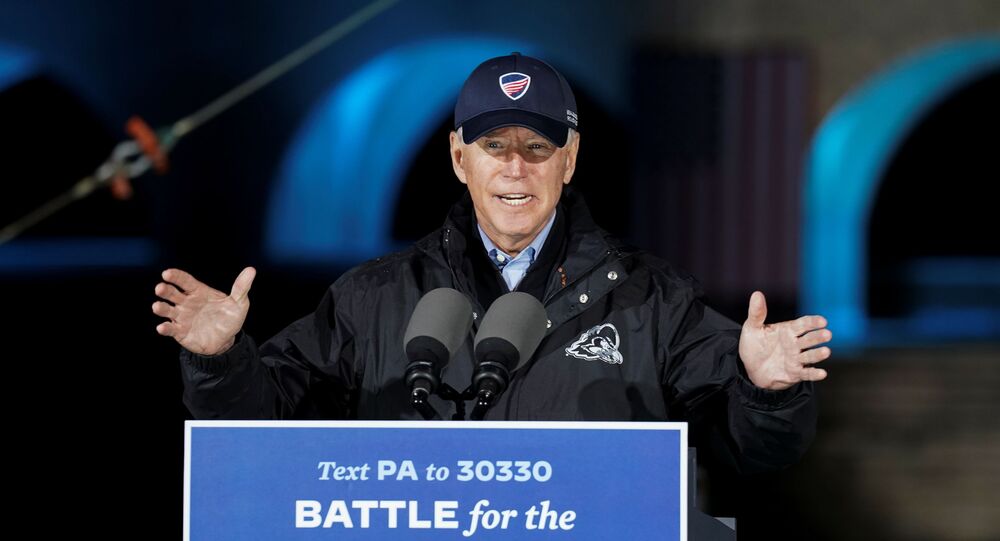 With the final countdown to the US Election Day already ongoing, some polls show that President Donald Trump is leading in Iowa, Ohio, and Texas, while Democratic challenger Joe Biden is ahead in Arizona, Florida, Georgia, and North Carolina, which are all battleground states.

A new poll released on Monday found that Democratic nominee Joe Biden’s lead over President Donald Trump in the battleground state of Pennsylvania has shrunk just a couple of days before the 3 November election.

The Monmouth University survey showed Biden leading Trump by seven points among likely voters in the Keystone State, down from the ex-vice president’s 11-point lead in the same poll in September.

Monmouth pollster Patrick Murray told reporters in this context that “all eyes have been on the Keystone State from the start”, because “Pennsylvania voters may have responded more than most to key events, such as the conventions and the debates”.

According to him, “the senior vote is up for grabs in Pennsylvania given the margin of error”, even though it “could end up decisively in either candidate’s camp on Tuesday”.

He added that “the trend in this poll is in line with recent Monmouth polls in Florida and Georgia last week, suggesting that Trump may be clawing back a little bit of the senior vote in the campaign’s final days while Biden is strengthening his position among younger voters and people of color”.

Murray spoke as another major survey, a Morning Consult poll, was released on Monday indicating that Biden is leading in a spate of swing states, also ahead of Trump by eight percentage points nationally.

According to the poll, about 51.9% of respondents said that they would vote for Biden if the election were held at the time of the survey, while 43.9% noted that they would pick the US president.

© REUTERS / MIKE SEGAR
Trump Takes Narrow Edge Over Biden in Ohio, Polls Reveal as Election Day Approaches
As far as battleground states are concerned, the poll indicated that the Democratic nominee was ahead in Michigan, Wisconsin, North Carolina, and Arizona, with POTUS just leading in Ohio, where he has 49.2% versus Biden’s 46.6%.

The FiveThirtyEight.com's poll tracker has, meanwhile, revealed that Trump leads in Iowa, Ohio, and Texas, while Biden is ahead in Arizona, Florida, Georgia, and North Carolina, in races that are all extremely tight.

The polls come after Trump embarked on an unprecedented final campaign track on Sunday, holding up to 10 rallies in seven swing states, including Michigan, Iowa, North Carolina, Georgia, Florida, Pennsylvania, and Wisconsin.

Our numbers are looking VERY good all over. Sleepy Joe is already beginning to pull out of certain states. The Radical Left is going down!

Earlier that day, POTUS struck an optimistic tone when tweeting that his campaign “numbers are looking very good all over”.

Referring to Biden, Trump added that “Sleepy Joe is already beginning to pull out of certain states” and that “the Radical Left is going down!”

Over 95 Mln Americans Voted Early in US Election

More than 95 million Americans have cast ballots early in the presidential election, scheduled for November 3, according to data from the US Elections Project revealed on Monday.

The data showed that 95,027,832 Americans had voted early. Almost 60.5 million voters sent their ballots by mail, while another 34.5 million were cast in person, the data showed.