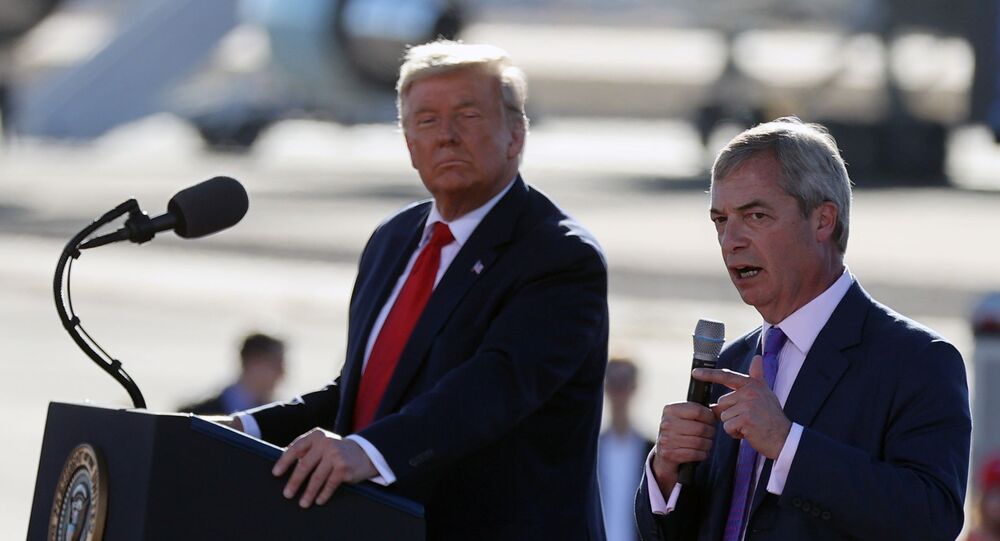 Nigel Farage, dubbed 'Mr Brexit' for leading the campaign for Britain to leave the European Union, said he had never seen such enthusiasm from supporters as he had at US President Donald Trump's campaign rallies.

Brexit Party leader Nigel Farage has called the result of the US presidential election for incumbent Donald Trump.

"He's not just the president of the USA, he is a human dynamo," the man dubbed 'Mr Brexit' told the UK's Talk Radio on Monday from Pennsylvania, a key swing state that his longstanding friend Trump snatched from the Democratic Party in 2016.

"Yesterday he did five rallies, and he was speaking for an hour or two hours at each of them," Farage said. "It is remarkable. They love him. He's got energy. He is just the greatest showman you have ever seen."

​The leader of the Brexit Party, soon to be re-branded Reform UK, said he had watched elections all over the world, but "I have never seen a support base as enthusiastic as they are for this man. These crowds chant 'we love you' and they mean it!"

And he said that despite the "evil" November weather, tens of thousands would turn out to see Trump at his Monday rally in Scranton, Pennsylvania - Democratic Party candidate Joe Biden's home town. By contrast, Biden's 'socially-distanced' drive-in campaign events have struggled to attract audiences of more than a few hundred.

Farage said US voters had a choice between a "long dark winter" under Biden or Trump's optimism.

"Vote for Joe Biden and vote for a long, dark winter and vote for lockdown," he said. "Or you can vote for Donald Trump, who says we have to get on and live the rest of our lives."

Most US opinion polls give Biden a commanding lead over the president ahead of Tuesday's election - as they did for Hillary Clinton who Trump beat in 2016. But on Friday the Republican Party's chairwoman said the Trump campaign was miles ahead of Biden's lacklustre organisation in canvassing voters, and was taking the lead in early voting.

"You can, if you want to, look at the opinion polls, look at the betting markets, look at the lead editorials of the global press and they will all tell you that its a slam dunk for Joe Biden. I do not believe it," Farage said. "I genuinely think he's going to win tomorrow."