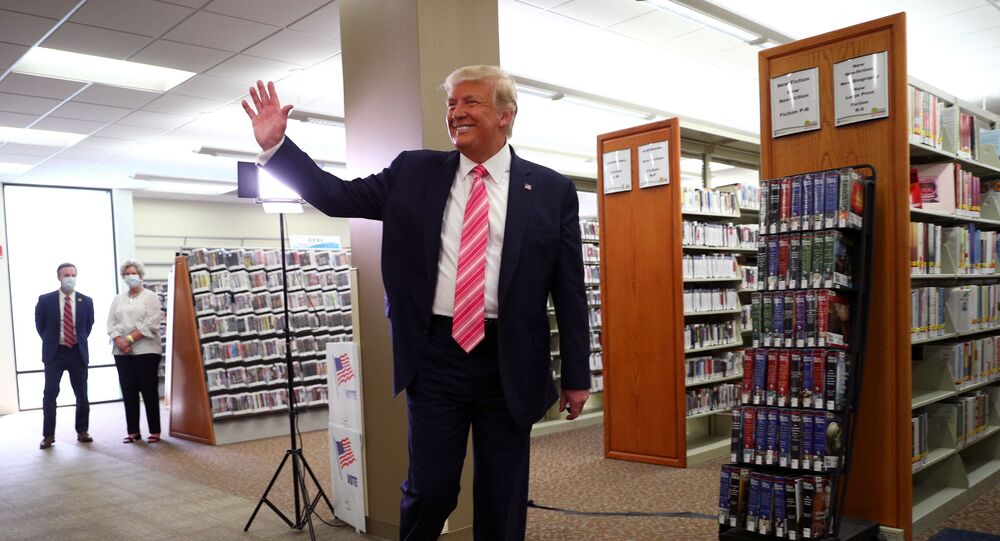 With the US presidential election entering its final week, Donald Trump is gearing up for a punishing tempo of massive campaign rallies across key battleground states - including three in one day next Tuesday. Meanwhile Democrat Joe Biden is sticking to his socially-distanced drive-in events.

US President Donald Trump has voted - for himself - as the last full week of campaigning for the Presidential election approaches.

The President cast his early ballot in West Palm Beach, Florida on Saturday, telling a group of supporters: "I voted for a guy named Trump."

At a rally in the sunshine state on Friday, he urged supporters to vote early and take others with them to the polls to help defeat his Democratic party rival Joe Biden.

“To continue our movement, I am going to rely on you. Get out and vote,” Trump told the crowd. “Vote early. Bring your friends, your family, your neighbors, your co-workers. Even grab your boss and say: ‘Come on, boss. You got to vote.’”

Republican candidates typically need to ​win Florida, with its 29 electoral college votes, to secure the presidency.

Hectic for Trump, but Joe takes it slow

Trump's campaign is going full tilt for a second term in the White House, with a whistle-stop tour of swing states, but Biden seems to be biding his time.

The president was set to speak at a rally in Circleville, Ohio on Saturday night, followed by another in Waukesha, Wisconsin on Sunday afternoon - then on to Manchester, New Hampshire that evening.

On Monday Trump will speak in Lititz and Martinsburg, both in Pennsylvania, three hours apart, then on Tuesday he will make appearances in Lansing and West Salem, Wisconsin a mere two hours apart before heading to Omaha, Nebraska for a midnight rally.

Biden has two drive-in rallies in Pennsylvania planned for Saturday, one in Bucks County near Philadelphia and the other in Luzerne county, where a swing to rump in 2016 helped win him the presidency and the election.

Biden's drive-ins have struggled to attract attendances in the hundreds, even when former president Barack Obama appeared for him in Philadelphia last week.

​Going to the polls

ARIANA DREHSLER
Neither a Biden nor a Trump Election Victory Will Halt US Partisan Standoff, Ex-NSA Analyst Says
Biden has been leading by an average of almost ten points in national polls for months - just as fellow-democrat Hillary Clinton did in 2016. But the electoral college system means the devil is in the detail of polling in a dozen swing states.

A Survey Monkey poll had Biden leading in six of the 12 battleground states: Arizona, Georgia, Michigan, North Carolina, Pennsylvania and Wisconsin, most by wide margins.

​But Rasmussen Reports gave Trump a slim one-point lead in North Carolina. Meanwhile the conservative Trafalgar Group, which correctly predicted Trump's 2016 win, has the president also leading in Arizona and Michigan, suggesting a much tighter race than other pollsters are predicting.