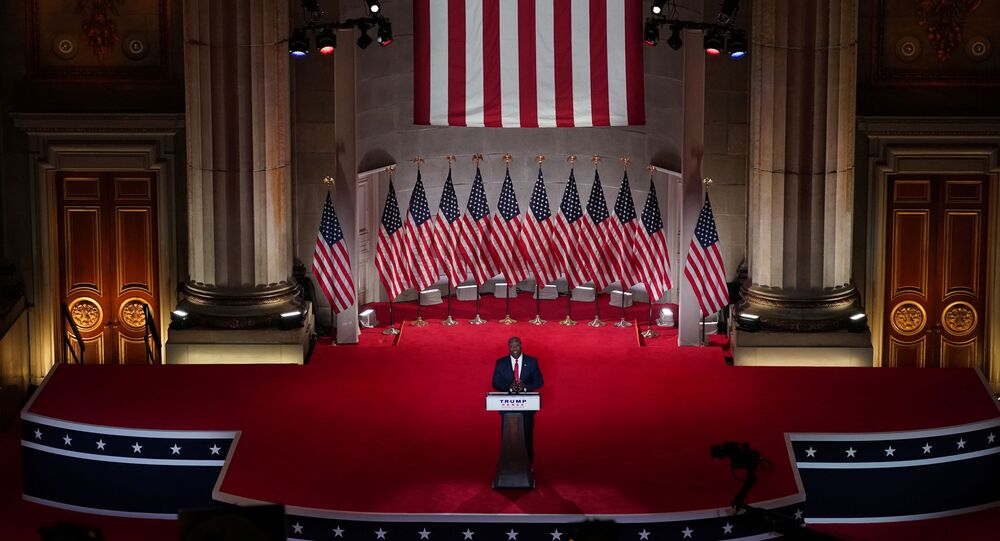 The Republicans on Monday officially nominated Donald Trump to run for a second four-year term. But the party’s showpiece is far from over, with a slew of high-profile speakers scheduled to make their case for Trump over the next three days.

The Republican National Convention is taking definite shape and volume.

Unlike their Democratic counterparts, who tried to position themselves as a union of different ideologies and generations, the GOP views itself – or at least wants to be seen – as a family protecting their home with a patriarch at the helm.

Here’s what to watch for next.

The First Lady will speak on Tuesday from the freshly-redesigned White House Rose Garden, on the different ways the convention is breaking with past political traditions.

Excited to honor history & celebrate the future in our beautiful @WhiteHouse Rose Garden this evening. Thank you to all who helped renew this iconic & truly gorgeous space. pic.twitter.com/ggiqLkdGbw

​It is unprecedented in modern US politics for presidents to use the White House for explicitly political events, with past presidents and first ladies avoiding crossing the line between their campaign and official duties.

Much focus will be on the authenticity of Melania’s remarks. Her appearance at the previous convention prompted accusations that she had plagiarised one delivered by the former first lady, Michelle Obama.

Mike Pompeo will be another norm-busting speaker at this year’s Republican convention. Pompeo, currently on a trip to the Middle East, will feature on Tuesday night in a pre-taped address given from a rooftop in Jerusalem, becoming the first sitting Secretary of State to deliver a speech to a party’s political convention in modern times.

There has been a lot of criticism about that decision, given that federal law prohibits White House officials from using their authority to affect an election (the president and vice president are largely exempt).

At a time when peace and security in Middle East is so tough, Jerusalem should not be a prop for the RNC, and @SecPompeo should not be tarnishing the office of SecState. Unprecedented and wrong.

The State Department announced on Sunday that Pompeo won’t violate the law because he will address the convention in his “personal” capacity. Democrats cried foul and four teams of lawyers, including the State’s legal counsel, have reviewed the speech but apparently found no violations.

While Pompeo appears to use Jerusalem to remind Trump’s white Christian base (and Jewish Americans) who their guardian is, Mike Pence will speak from another unorthodox location.

The just-renominated vice president, who already spoke for 20 minutes on Monday, will take the stage at the iconic national monument Fort McHenry on the third night of the convention.

© REUTERS / POOL
U.S. President Donald Trump and Vice President Mike Pence give a thumbs up after speaking during the first day of the Republican National Convention, in Charlotte, North Carolina, U.S., August 24, 2020.

His speech also hasn’t proceeded without a small scandal. A forklift has damaged a brick walkway at the monument where the stage was being built for Pence, drawing scorn from a national parks advocacy group.

Perhaps the most intriguing appearance will be that of Kellyanne Conway, the White House senior advisor who abruptly stepped down on Sunday citing the need to devote more time to family matters.

Conway, who was Donald Trump’s third campaign manager in 2016, appears to have suffered a family rift along political lines.

Hours before the announcement, 15-year-old Claudia Conway claimed in a viral tweet that her mother’s job had “ruined [her] life”.

“Heartbreaking that she continues to go down that path after years of watching her children suffer,” she wrote, describing her mother’s behaviour as “selfish”.

my mother’s job ruined my life to begin with. heartbreaking that she continues to go down that path after years of watching her children suffer. selfish. it’s all about money and fame, ladies and gentlemen.

​Kellyanne Conway’s husband, the DC-based attorney George Conway, said on Sunday that he would be stepping down from The Lincoln Project – a group formed by anti-Trump Republicans – also citing family reasons. George Conway has been an outspoken Trump critic and once called the president “incompetent”. Trump hit back by calling him a “stone cold loser” and “husband from hell”.

The Senate Majority Leader will have a speaking role on Thursday. This was confirmed after his spokeswoman said that he would be travelling across his home state of Kentucky at the time of the convention. The aide later walked back her statement, citing “miscommunication”.

McConnell, a close Trump ally presiding over a slim three-seat majority in the Senate, will submit taped remarks.

The president’s daughter and senior adviser cannot invoke federal authority, according to the rules, and has to be introduced as his daughter and not his employee.

I’m excited to introduce my father this Thursday night at the Republican National Convention! 🇺🇸🇺🇸🇺🇸 pic.twitter.com/EkSTzS0tEW

​The White House has reaffirmed that Ivanka, who introduced her father on the first night of the convention, will be speaking in her “personal capacity” to avoid a Hatch Act violation.

That Giuliani is in the line-up gives reason to believe the convention won’t be all about praising Trump’s track record and plans for the future.

His personal attorney has led the charge to look into corruption accusations against Joe Biden in Ukraine. That charge ended up with a failed attempt to oust Trump in the winter through impeachment, but Giuliani may well revive the conspiracy in his address on Thursday.

Another prominent speaker – and the only one on this list from outside the political realm – will be Dana White, president of the Ultimate Fighting Championship.

The face of MMA’s biggest promotion is a long-time supporter of the US president, having stumped for Trump at the 2016 convention in Cleveland.

White, a major Republican donor, recalled their personal connection at the time. “In 2001, my partners and I bought the UFC and it was basically considered a blood sport,” he said in an animated speech in Cleveland. “State athletic commissions didn’t support us, arenas around the world refused to host our events. Nobody took us seriously. Nobody, except Donald Trump.”

“Donald was the first guy that recognised the potential that we saw in the UFC and encouraged us to build our business. He hosted our first two events at his venue. He dealt with us personally.”

Trump also became the first sitting US president to attend an MMA fight when he was in attendance at UFC 244 in New York in November 2019.