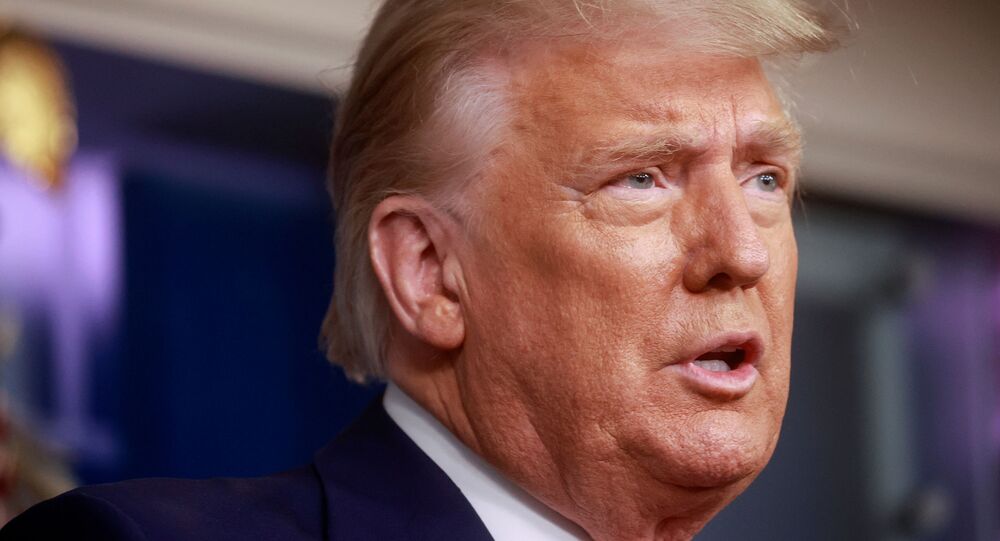 Donald Trump addressed a campaign event in Georgia on Saturday to show support for two Republican US Senators set to wrangle against their Democratic opponents for seats in the Senate during the state’s runoff election on 5 January.

President Donald Trump pitched the idea of a potential 2022 gubernatorial run by Rep. Doug Collins (R-Ga.) as he addressed a campaign rally on Saturday aimed at drumming up support for Georgia Republican senators in the Peach State’s crucial runoff election.

​Speaking at his first campaign event since the 3 November presidential election, which is projected by US media to have been won by Democrat Joe Biden, Trump applauded Collins’ effort to challenge Republican incumbent Kelly Loeffler for her Senate seat.

In the special Senate general election in November, Loeffler and Democratic challenger Rev. Raphael Warnock advanced to a runoff after none of the candidates swept up the 50 percent required to win in Georgia, with Collins coming in third.

“He [Collins] and Kelly had a great primary, a very strong primary. They both did fantastically well, and he is on board and he is one of the greatest advocates I’ve ever met in Washington,” said Trump.

As the President proceeded to thank Doug Collins, commending him for “the job he does”, he asked the US representative for Georgia's 9th Congressional District, who was in attendance at the event:

“Doug, you want to run for governor in two years?”

To a cheering audience, Trump added: “He’d be a good-looking governor.” Addressing the crowd, Trump, who lost Georgia's 16 electoral votes to Joe Biden after an audit and a recount, urged support for Republican Senators David Perdue and Kelly Loeffler in the runoff.

"The voters of Georgia will determine which party runs every committee, writes every piece of legislation, controls every single taxpayer dollar. Very simply, you will decide whether your children will grow up in a socialist country or whether they will grow up in a free country," said Trump, extolling Perdue and Loeffler as "two of the finest people you'll ever meet".

The potential gubernatorial run by Doug Collins would signal a challenge to Republican incumbent Brian Kemp, who is currently serving his first term as governor.

Trump’s campaign event statements follow a report in The Washington Post claiming that the president had called Kemp on Saturday morning to urge him to summon a special session of the legislature to overturn the election results and demand an audit of absentee ballot signatures. According to sources cited by The Post, Kemp turned down the President’s requests.

There has not been an official comment from Brian Kemp, with his spokesman Cody Hall telling The Hill that Donald Trump had called the governor on Saturday to express his condolences regarding the death of Harrison Deal, a campaign staffer for Loeffler and longtime family friend of the governor.

Nevertheless, in a tweet on Saturday, Kemp claimed he had told President Trump he had repeatedly asked for a “signature audit”, which he said must be legally ordered by the current secretary of state, Republican Brad Raffensperger.

​Later on Saturday Trump slamming Kemp in a tweeted response, to say that the governor’s people were “refusing to do what you ask”.

​Earlier, a lower court ruling that rejected a bid by a conservative lawyer to block Joe Biden’s victory in Georgia was upheld by the US Court of Appeals for the 11th Circuit in a series of setbacks suffered in battleground states across the country by the Trump legal team to overturn the election results.

The southeastern state of Georgia is holding two special elections on 5 January that are crucial to determining which party will control the US Senate.

In Georgia, a political candidate in a primary or general election must garner over 50 percent of the votes, failing which the top two vote-winners enter a runoff race.

Winning one of the runoffs would suffice for the Republicans to retain control of the US Senate, while the Democrats need to win both seats to result in a 50-50 Senate that would allow would-be VP Kamala Harris, if she wins the post, to wield tie-breaking vote power when required.

'We Are Winning This Election': Trump Throws First Post-Election Rally in Georgia

Trump Names 'Happiest People in the World' During Georgia Rally