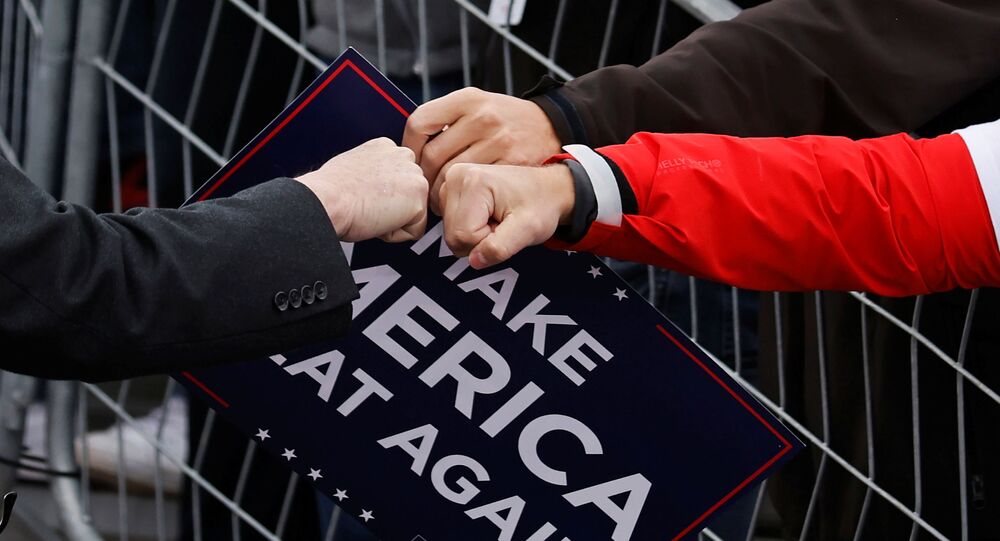 While mainstream US media has projected Democrat Joe Biden to win the US presidency, sitting President Donald Trump has refused to concede, claiming massive election fraud due to an unprecedented amount of mail-in ballots.

Trump campaign announced on Saturday that it will seek "expedited appeal" following the dismissal of the lawsuit filed earlier in Pennsylvania that demanded to discard mail-in ballots in the state.

"Today's decision turns out to help us in our strategy to get expeditiously to the US Supreme Court", the statement by Trump's lawyer Rudi Giuliani and Trump campaign senior legal advisor Jenna Ellis reads. "We will be seeking an expedited appeal to the Third Circuit. There is so much evidence that in Pennsylvania, Democrats eliminated our opportunity to present 50 witnesses and other evidence that election officials blatantly ignored Pennsylvania's law denying independent review".

Giuiliani and Ellis went on to assert that this was "just an extension of the Big Tech, Big Media, Corrupt Democrat censorship of damning facts the American public needs to know". Trump's lawyers also expressed disappointment over their lack of opportunity to "present our evidence" at a hearing.

🚨NEW: @RudyGiuliani and my statement for @TeamTrump on Pennsylvania ruling.

(We actually read the 37-page ruling BEFORE reacting.) pic.twitter.com/4nhuakofrt

Earlier in the day, federal judge Matthew Brann dismissed the Trump lawsuit, describing the case as "strained legal arguments without merit and speculative accusations", marking the latest failure of the Trump campaign to challenge the projected election results.

"...This Court has been presented with strained legal arguments without merit and speculative accusations, unpled in the operative complaint and unsupported by evidence. In the United States of America, this cannot justify the disenfranchisement of a single voter, let alone all the voters of its sixth most populated state", Brann's ruling added.

The judge dismissed the Trump action "with prejudice", meaning that the case can no longer be brought to court.

Earlier on Saturday, Republicans Mike Kelly and Sean Parnell filed a lawsuit to the Commonwealth Court of Pennsylvania requesting to declare universal voting by mail unconstitutional and deny the majority of Pennsylvanian votes in the US election cast by mail.

A Democratic lawyer Marc E. Elias labeled the lawsuit "frivolous", prompting a swift reaction from Donald Trump, who argued that it is brought on behalf those "disgusted by an Election that is a fraudulent mess".

This is not at all frivolous. It is brought on behalf of one of the most respected members of the United States Congress who is disgusted, like so many others, by an Election that is a fraudulent mess. Fake ballots, dead people voting, no Republican Poll Watchers allowed, & more! https://t.co/mOGdSOeZW8

In a follow-up tweet, Trump doubled down on his claims that Republican poll watchers were "not allowed to “watch”, not even allowed in the counting rooms", again recalling "fake ballots and dead people voting".

Well, there were hundreds of thousands of votes cast where Republican Poll Watchers were not allowed to “watch”, not even allowed in the counting rooms. Likewise with Fake ballots cast and dead people voting! https://t.co/dqHIhObMLs

The Pennsylvania lawsuit is just one of dozens of lawsuits filed by the Trump campaign in attempts to overturn the projected election results that saw Joe Biden win the 2020 presidential race. Since election night, Trump has been claiming massive election fraud and has demanded a stop to the counting of votes that he has stated are "illegal" - particularly mail-in ballots that arrived after election day.

In the most recent lawsuit to be thrown out of court, the Trump campaign requested overturning millions of mail-in ballots that “should not have been counted”, suggesting that the purportedly disputed votes resulted “in returns indicating Biden won Pennsylvania.”

Earlier in the week, another Trump campaign lawsuit - accusing officials in Pennsylvania of violating state election law by not letting Republican observers to the mail ballots counting locations - was also thrown out due to health concerns raised due to the coronavirus pandemic.

On Thursday, Trump's lawyer, Rudy Giuliani accused the Democrats of a centrally-engineered election fraud, claiming a pattern in key battleground states according to which Trump lost earlier leads to Biden.

Apart from Pennsylvania, Georgia was also one of the battleground states where Trump demanded to recount the votes. Georgia State Secretary Brad Raffensperger revealed earlier in the week that the hand audit of ballots in the state reaffirmed the victory of Joe Biden, and certified the results on Friday.

US 2020 presidential election saw historical turn-out, partly due to an unprecedented amount of mail-in balloting - vote practice that the Democrats touted as a safer way to vote amid the coronavirus pandemic raging in the country, and vehemently opposed by Trump and his fellow Republicans as potentially leading to election fraud.