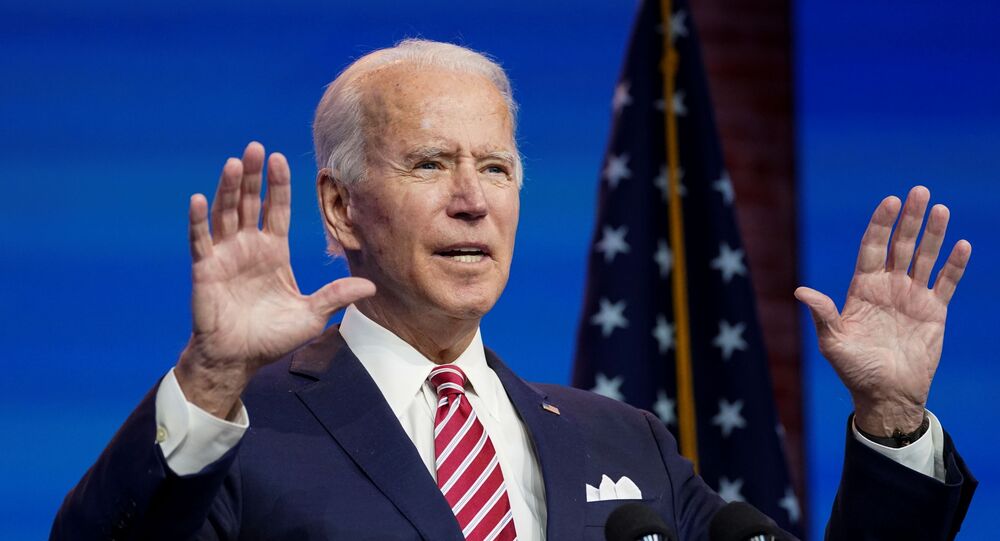 Although the official results of the US presidential election are still to be announced, Democrat Joe Biden is projected by the media to win the Oval Office and is now being referred to by many world leaders as the "President-elect", while Trump insists there was "election fraud" and refuses to concede.

Speaking in the Delaware city of Wilmington on Monday, projected US President-elect Joe Biden delivered remarks on the economic plan of the Biden-Harris ticket, elaborating on his ambitions regarding tax policy, wage structure and relief packages.

Introducing his economic plan, the Democrat referred to his "Build Back Better" slogan and pledged to combat the global coronavirus pandemic that has been particularly ravaging the US.

"Once we shut down the virus and deliver economic relief to workers and businesses, then we can start to build back better than before", Biden said in his remarks.

In his speech, Biden vowed that his economic plan would help create 3 million "good paying union jobs", along with raising the minimum wage to $15 per hour.

"When we build back better, we'll do so with higher wages, including a 15 dollar an hour minimum wage nationwide, better benefits, stronger collective bargaining rights [...] that you can raise a family on", he asserted.

He also suggested hat he would create a fair tax structure, noting that his economic plan is not aimed against business, but instead the wealthy, who, along with major companies, will have to "pay their fair share" in taxes. Biden also pledged that there would be no government contracts for firms that do not manufacture goods within the US.

“No government contract will be given to companies that do not make their products here in America", he said.

Biden in his remarks stressed the importance of adopting a coronavirus relief package "now".

The projected President-elect expressed his readiness to work with people from every side of the political spectrum to "deliver those necessary resources".

© REUTERS / KEVIN LAMARQUE
U.S. President-elect Joe Biden holds up a face mask as he speaks about the U.S. economy following a briefing with economic advisers in Wilmington, Delaware, U.S., November 16, 2020

Biden also urged the sitting US president, Donald Trump, to start coordinating plans for nationwide coronavirus vaccination, warning that more may die "if we don't cooperate".

"So how do we get the vaccine, how do we get over 300 million Americans vaccinated, what’s the game plan? If we have to wait until January 20 to start that planning it puts us behind over a month and a half. It’s important that it be done in coordination now. Now or as rapidly as we can get that done", Biden stated.

While saying that he is "reluctant" to answer whether Washington should join the Regional Comprehensive Economic Partnership (RCEP) agreement, along with 15 other countries, Biden stressed the need to be "aligned with the other democracies" in setting rules for world trade.

"We make up 25% of the world's trading capacity of the economy in the world," he said. "We need to be aligned with the other democracies -- another 25% or more -- instead of having China and others dictate outcomes because they are the only game in town".

The RCEP agreement, between 15 countries of the Asian-Pacific region that account for an estimated 30% of the world's gross domestic product, was signed on Sunday. The trade accord includes China, Japan, South Korea, Australia, New Zealand, and the ten members of the Association of Southeast Asian Nations (ASEAN): Brunei, Darussalam, Cambodia, Indonesia, Laos, Malaysia, Myanmar, the Philippines, Singapore, Thailand, and Vietnam.

While Biden has voiced ambitions regarding his plans for the US economy, the official results of the presidential election are still to arrive. As the Democrat is unanimously projected by mainstream US media to win the White House, Trump has repeatedly refused to concede, insisting that there was widespread "election fraud".