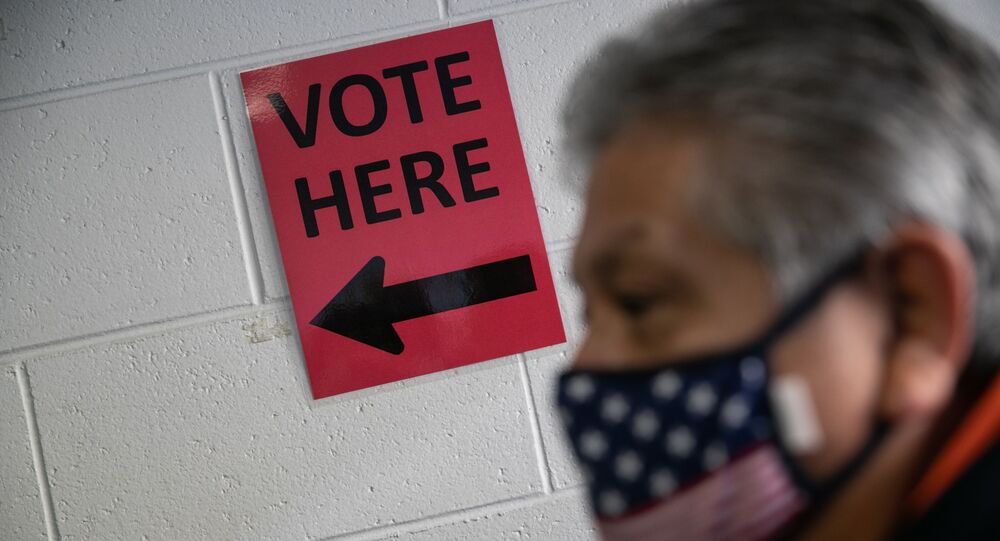 US President Donald Trump's campaign attorney on 7 November demanded recounts in every state using the vote-tallying machine software that erroneously “flipped” 6,000 votes to Democrats in one Michigan county from the Republicans, as Trump continues to question the legality of vote counting in key battlefield states that are under scrutiny.

Fox News host Sean Patrick Hannity has fed into the growing controversy surrounding Dominion Voting Systems, one of the major systems used as Americans cast their ballots in the 3 November presidential elections across the country.

WATCH: @SeanHannity on the horrible, inaccurate and anything but secure Dominion Voting System, used in States where tens of thousands of votes were stolen from @realDonaldTrump and given to Biden! pic.twitter.com/RvqrHFH2ZE

While the official results of the elections are still to be announced, Democratic candidate Joe Biden was declared winner of the race for the Oval Office on Saturday by major US media outlets, while President Donald Trump refused to admit defeat, decrying voter fraud.

What is Behind the System ‘Glitch’?

Amid a razon-thin purported lead by the Democratic candidate in some key swing states, and Republicans questioning the legality of the voting, Dominion Voting Systems has found itself in the eye of the storm.

Dominion, originally a Canadian company that is now headquartered in Denver, makes machines for voters to cast ballots and for poll workers to count them. It also produces the software that helps government officials both organise and keep track of election results.

US President Donald Trump's campaign attorney demanded recounts in every state that used the company’s software (at least 28 states), after it was revealed to have wrongly given 6,000 votes to Democrats in the Michigan county of Antrim, with a “glitch” being stated as the reason.

"If 30 states have used the software and there's already proved to be a glitch of 6,000 votes in one balloting area... lawyers should be... demanding a manual recount," said Jay Sekulow, a member of President Donald Trump's legal team.

Fox News’ Sean Hannity said that reports seemed to suggest that there might be a lot more to this story.

Back in June 2020, during the Georgia statewide primary elections, numerous issues with the Dominion Voting Systems machines were cited.

The New York Times stated that the “machines required too much power for ageing voting locations…and were blowing fuses and never powering on”. In other cases, “wokers struggled with setup”.

The outlet had also written that “the electronic poll books, also new, were plagued by freezing software and user error.”

The television host then suggested that the question be asked:

All Americans who voted for President Donald Trump deserve an answer, said the Hannity Host. He added, however, that he did not expect the “media mob” to ask these questions.

The commentator also drew examples from further afield, as in 2018 AP had written that Dominion Voting Systems of Denver sells and service the machinery with which votes are cast and results tabulated, yet has “long skimped on security in favour of convenience, making it more difficult to detect intrusions”.

Furthermore, a 19 January 2019 report from the Texas Secretary of State found issues with the Dominion Voting Systems Democracy Suite 5.5A machine – the same model that was used, for example, in Pennsylvania, where Biden was announced by US media to have narrowly won, sealing a purported victory before an official vote count was completed.

Texas had rejected Dominion’s voting machines twice, in 2013 and again in 2019, as two state offices discovered what they called “multiple hardware and software issues that preclude the Office of the Texas Secretary of State from determining that [Dominion’s] Democracy Suite 5.5-A system satisfies each of the voting-system requirements set forth in the Texas Election Code.”

Dominion Voting Systems: Toronto based @dominionvoting was rejected by Texas Secretary of State in 2019 for major flaws in their software. Why was it used this election in 6 battleground states and 22 others? #MAGA #AmericaFirst #Dobbs pic.twitter.com/5QYBspy8VA

​In October 2019, the Office of the Texas Secretary of State explained that Dominion didn’t meet certification requirements under the Texas election code.

Concerns were raised as to whether the Democracy Suite 5.5-A system was suitable for operating efficiently and accurately and was safe from fraudulent or unauthorised manipulation.

© AP Photo / Charlie Neibergall
In this Oct. 20, 2020, file photo, Kelly Wingfield, of Urbandale, Iowa, fills out his ballot during early voting for the general election in Adel, Iowa. As it has for more than 170 years, The Associated Press will count the vote and report the results of presidential, congressional and state elections quickly, accurately and without fear or favor on Nov. 3 and beyond.

Amid claims of irregularities, the Cybersecurity and Infrastructure Security Agency (CISA) has issued an apparent response to US President Donald Trump's claims of voter fraud, stating the 2020 election was the most secure to date.

While the official results of the presidential race in America remain to be announced, Democratic candidate Joe Biden was declared winner of the race for the Oval Office on Saturday by major US media outlets.

The former vice president has even outlined his first steps in the White House, despite Donald Trump refusing to concede victory and questioning the legality of vote counting in key battlefield states. President Trump has insisted that massive election fraud and irregularities have taken place, blaming Democrats for rigging the election in their favour and slamming major US media for refusing to cover it.

The Trump campaign has launched a number of lawsuits across the country, citing a lack of transparency, the blockage of Republican observers from overseeing the process of vote tabulation and ballot back-dating. Most claims relate to the states of Michigan, Georgia, Arizona and Pennsylvania.