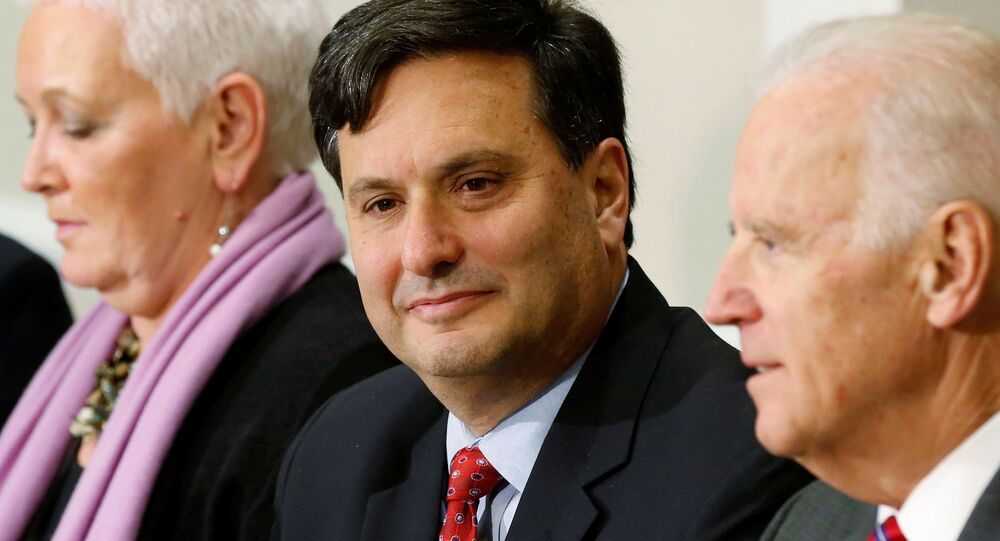 Earlier, Joe Biden's team announced it was preparing the incoming administration to take control of the federal government, as Donald Trump’s Democratic opponent was proclaimed president-elect by major media outlets in the US, despite Trump refusing to concede and launching legal challenges against the election results in a number of swing states.

Joe Biden, who has been forecast to win the US presidential election by the country's mainstream media, has tapped Ron Klain, one of his most trusted campaign advisers, to be his presumed incoming chief of staff, according to a Wednesday news release by the Biden transition office.

In a statement sharing the news, the alleged president-elect said:

“Ron has been invaluable to me over the many years that we have worked together, including as we rescued the American economy from one of the worst downturns in our history in 2009 and later overcame a daunting public health emergency in 2014."

Biden was referring to the period when Klain was in charge of the Barack Obama administration’s response to the Ebola health crisis in 2014.

Recalling the period when he worked alongside Klain, the Democratic presidential candidate added:

"His deep, varied experience and capacity to work with people all across the political spectrum is precisely what I need in a White House chief of staff as we confront this moment of crisis and bring our country together again."

Klain, who boasts a long career in government, having served as chief of staff to Vice President Al Gore during the Clinton administration and Biden when the latter was President Barack Obama's vice president, had been touted as a likely choice for the top job.

In a response statement, Klain on Wednesday hailed his appointment as "the honour of a lifetime".

"I look forward to helping him and the Vice President-elect assemble a talented and diverse team to work in the White House, as we tackle their ambitious agenda for change, and seek to heal the divides in our country," said the 2014 Ebola response coordinator.

Klain also went on Twitter to express his gratitude to the Biden-Harris team.

I’ve seen so many kind wishes tonight on this website. Thank you - and I’m sorry I can’t reply to each of you.

I’m honored by the President-elect’s confidence and will give my all to lead a talented and diverse team in a Biden-Harris WH.

As Joe Biden campaigned on pledges to bring Americans out of the crisis generated by the coronavirus pandemic and the ensuing economic recession, Klain is suggested as bringing his unique expertise, garnered during the Ebola crisis in 2014.

At the time, then-president Barack Obama tasked the Democratic operative with seemingly little public health experience with coordinating both the domestic public health response and the international humanitarian and military efforts to stop the virus in West Africa.

Samaritan's Purse
Medical workers are disinfecting the dead body of an Ebola patient.

During the current Biden campaign, Klain reflected the Democratic presidential candidate’s stance on the pandemic, vehemently criticising the Trump administration’s handling of the situation.

"The Trump administration's response to this crisis has clearly failed… Donald Trump has waved the white flag in the fight against coronavirus," said Klain said in a campaign video released in July.

Who is Ron Klain?

A 1987 graduate of Harvard Law School and one-time editor of the Harvard Law Review, Klain did a stint as law clerk to Supreme Court Justice Byron R. White.

Subsequently, then-Sen. Joe Biden appointed him to serve as chief counsel for the Senate Judiciary Committee from 1989 to 1992.

Klain has extensive experience of working with Democratic presidential campaigns, such as Joe Biden’s in 1988 and 2008, and Al Gore’s failed presidential bid in 2000, acting as general counsel during the latter’s presidential election recount.

At the time, the Florida election recount occurred after Election Day between candidates George W. Bush and Al Gore. The vote was ultimately settled in Bush's favour by a margin of 537 votes.

From 2008 to 2011, Klain served as then-vice-president Biden’s chief of staff, and was reportedly instrumental in overseeing the stimulus package, estimated at around $787 bln, that Barack Obama signed in in February 2009 in response to the Great Recession.

Klain’s counsel is believed to have been invaluable in debate preparation for Democratic candidates starting with Bill Clinton. He was also a senior adviser to Hillary Clinton's failed 2016 campaign, when she lost to Republican rival Donald Trump, similarly focused on preparing her for debates.

After Joe Biden was forecast on 7 November to win the US presidential election by the US media, which announced he reached the required threshold of 270 Electoral College votes with a win in Pennsylvania, his team has been announcing who will work to prepare the incoming administration to take over control of the federal government. The moves come despite President Donald Trump refusing to admit defeat, as his legal team files lawsuits in several key swing states, alleging voter fraud.