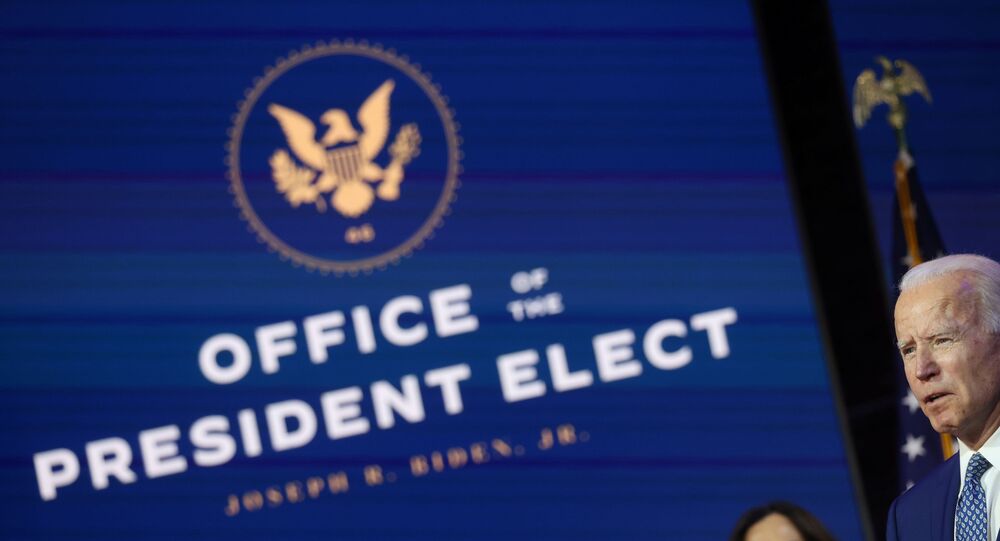 GSA Will Not Affirm Biden as President-Elect Earlier Than 13 November, Media Says

The administrator of the federal agency is already facing mounting pressure from Democrats to recognise Biden's victory despite several states still tallying votes, with at least one heading for a mandatory recount.

Emily Murphy, the administrator of the General Services Administration (GSA), which is responsible for helping a winning presidential candidate with the transition of power, will not be affirming Joe Biden's victory until at least 13 November, Politico reported citing two anonymous sources from the White House.

According to these sources, purportedly citing White House Chief of Staff Mark Meadows and other aides to POTUS, the announcement of the winner in the presidential race might come at an even later date – after all states are done with counts and recounts of votes.

America's national security and economic interests depend on the federal government signaling clearly and swiftly that the United States government will respect the will of the American people and engage in a smooth and peaceful transfer of power.

The news comes as Murphy is facing mounting pressure from Democrats to "ascertain" Joe Biden as president-elect thus giving his transition team additional opportunities, such as communicating with federal agencies, as well as access to nearly $10 million in funding to hire staffers and conduct other operations. Biden's transition aide, Jen Psaki, called on the GSA administrator to recognise the Democrat as the winner in order to "engage in a smooth and peaceful transfer of power" and defend US "national security and economic interests".

Several house Democrats echoed Psaki's statement, urging Murphy to recognise Biden as the winner citing concerns for public health. Despite the lack of access to a full array of instruments provided to the transition team of presidential candidates, Biden has already assembled his COVID-19 response team to develop a roadmap on how to deal with the pandemic. It is unclear how Murphy's reluctance to name him president-elect affects the Democrat's plans in that regard.

"[Murphy's] actions delaying 'the orderly transfer of the executive power' fly in the face of congressional intent and ignore the will of the American people while endangering public health and national security", House Democrat Gerry Connolly stated.

The GSA has stated that the administrator will "continue to abide by, and fulfill, all requirements" under the Presidential Transition Act enacted back in 1963. The agency also cited a prior precedent set in the 2000 presidential election, when for over a month there was no clear winner over repeated recounts in the state of Florida.

Why is the GSA Administrator Reluctant to Affirm Biden as Winner?

The Presidential Transition Act orders the GSA to provide all instruments, resources, and access necessary for a smooth transition of power from the departing administration to the incoming one. The GSA administrator is specifically tasked with ascertaining the "apparent successful candidate for the office of president" as the "president-elect" – a title needed for a candidate to access these government resources.

While major news networks have already named Biden as the projected winner of the US election, this statement is disputed by incumbent President Donald Trump. He argues that the election is "far from over" and that it is not the media, who name the winner of the presidential race. POTUS promised to dispute the results of the election in several states as counting still continues in some of them. At least one state, Georgia, is currently heading for a mandatory recount, while Trump can request additional recounts in three more states - Wisconsin, Pennsylvania, and Nevada. Should all or most of the recounts flip the states in his favour, Trump might amass a total of 284 Electoral College votes – more than enough to secure a second term for himself.