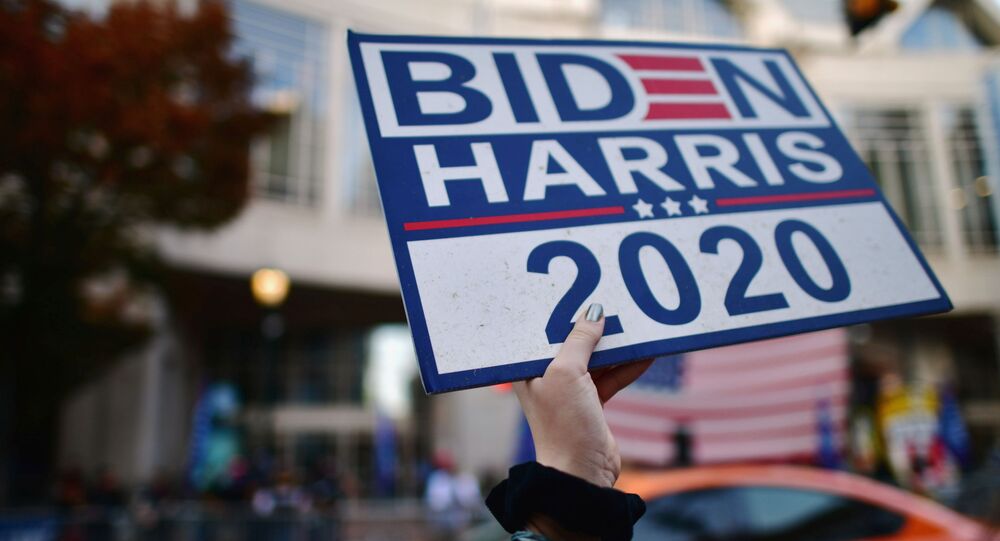 Major news networks declared Biden the projected winner in the 2020 presidential election on 7 November based on the preliminary results of the vote tally in the last uncounted states. However, incumbent President Donald Trump disputed such declarations as "false", while promising that the election is "far from over".

The administrator of the General Services Administration (GSA), Emily Murphy, whose agency is mostly tasked with maintaining the mundane operations of other government bodies, has suddenly found herself in the spotlight after she refused to officially name or "ascertain" Democrat Joe Biden as the winner of the presidential election. The reason for it is that the GSA is, among other things, is responsible for ensuring a smooth transition period between the departing and arriving administrations, but the process can't be carried out in full without Murphy officially recognising Biden's victory.

One of the Democrat's transition aides, Jen Psaki, has already urged Murphy to make a move and ascertain Biden, insisting that US "national security and economic interests" depend on her decision.

America’s national security and economic interests depend on the federal government signaling clearly and swiftly that the United States government will respect the will of the American people and engage in a smooth and peaceful transfer of power.

Psaki's call was echoed by House Democrats Gerald E. Connolly and Eric Swalwell, with the latter starting a Twitter hashtag #TimetoTransition to attract attention to the issue.

What Does Presidential Transition Act of 1963 Have to Do With 2020 Election?

In their official response to questions regarding the transition, the GSA has insisted that Murphy strictly abides by the Presidential Transition Act in her actions or lack thereof.

According to the Presidential Transition Act, which was enacted back in 1963, the GSA is obligated to fully facilitate the transition of power from the incumbent president's administration to that of the "president-elect" and "vice-president-elect" after being "ascertained" as such by the GSA administrator. The condition for being "ascertained" is vaguely defined in the document as being the individuals who "are the apparent successful candidates for the office of President and Vice President" without giving any additional measurements that help define which victory can be considered "apparent".

Since when does the Lamestream Media call who our next president will be? We have all learned a lot in the last two weeks!

At the same time, while Biden was named the projected winner of the presidential race by numerous major news networks, the counting process continues in several states, with one of them, Georgia, heading directly for an automatic recount. In addition to it, Donald Trump might order recounts in at least three more states, Wisconsin, Pennsylvania and Nevada, with each of them containing the possibility of flipping in his favour. Besides that, Trump has vowed to file numerous lawsuits to dispute the election results in certain states over alleged voter fraud, late-arriving mail-in ballots and Republican observers being purportedly denied access to the polling stations.

The recounts and lawsuits against the results in the four states might give Trump at least 52 Electoral College votes in the aforementioned states, which with the projected three votes from Alaska might give him up to a total of 284 votes, thus leaving the POTUS a potential chance to win.

At the same time, the GSA did not explicitly specify what its administrator is waiting for in order to declare the election winner – an official declaration of the voting results after all legal disputes are settled or the official victory achieved through the Electoral College vote, which will take place in the middle of December.

What Does Biden's Transition Administration Lose Without GSA's Assistance?

Despite Murphy not ascertaining Joe Biden and Kamala Harris, the transition process has already begun. In fact, it started before the election in June, when both Biden and Trump established transition councils and started to release ethics plans for their transitions in accordance with a bipartisan 2019 law which sought to prevent the problems and potential conflicts of interests that, among other things, prevented a smooth transition in 2016.

In addition to it, Biden was given access to classified national security briefings back in August, which might have helped him form a national security strategy  – an issue which was raised by Jen Psaki in her address to the GSA administrator. Biden's transition team has also already had the opportunity to start vetting potential nominees for key administration posts with the FBI.

© REUTERS / Carlos Barria
As Trump Vows Lawsuits to Dispute Biden's Projected Victory, Can It Be Bush vs Gore All Over Again?
Yet, until Murphy ascertains Biden, his transition team will not be able to further vet candidacies with the Office of Government Ethics. The Democrat's team also doesn't have access to information on the federal agencies' current operations, as well as to nearly $10 million in government funding for hiring and maintaining a transition team, incoming administration members, and staffers. Should the head of the GSA stall until the Electoral College declares the winner, Biden's team will lose approximately a month of time to prepare for entering the White House in case of a successful election. But, at the same time, it will have a month to do so, while many of the preparations do not require the access currently blocked by the lack of decision on Murphy's part.
...
Reddit
Google+
Blogger
Pinterest
StumbleUpon
Telegram
WhatsApp
253

Kremlin: Russia Ready to Cooperate With Any US President Elected by Americans

What the Future Holds for the US After the Election?; Coronavirus Medical Update