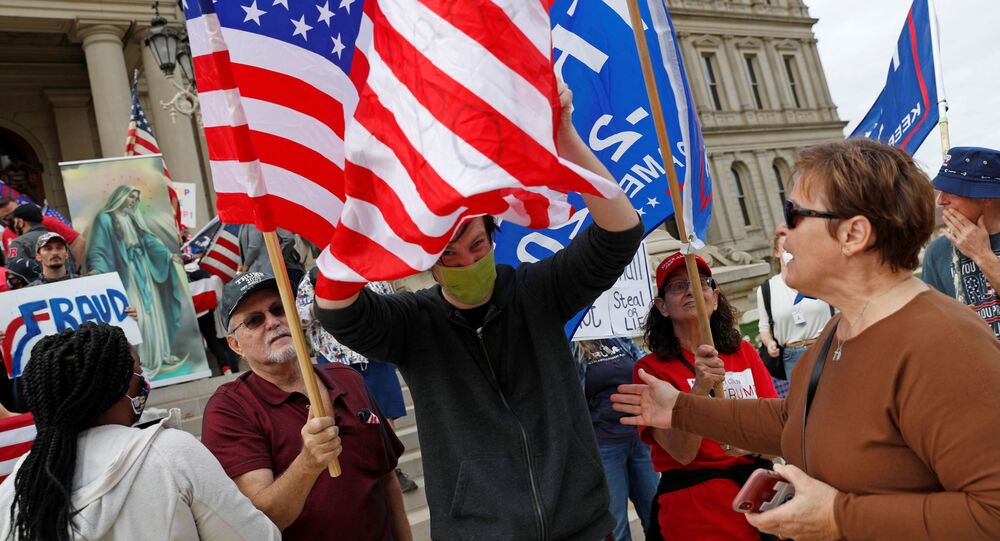 Amid post-election anxiety in the United States, several cities across the country have seen protests - some peaceful and looking more like dance parties, and some involving squabbles between Trump and Biden supporters as well as a few clashes with police.

Protesters took to the streets of the Michigan cities of Ann Arbor and Lansing on Sunday, some rallying to "stop the steal" of the US presidential election and some protesting racism and police brutality.

As the day began, with Trump supporters flocking to the steps of the local capitol building in Lansing, it continued with Black Lives Matter demonstrators arriving at the scene and interrupting the "stop the steal" rally. Heated debate ensued.

One Trump supporter appeared to have broken a BLM activist's megaphone, but then reportedly returned money for it.

“Call that guy out for breaking my megaphone!” After one of the BLM demonstrators claimed his megaphone was broken, a Trump supporter handed him $100 to replace it #Lansing #Michigan #PeacefulProtest pic.twitter.com/Sob4O3ivw5

To prevent some of the clashes seen at yesterday’s protests in Lansing, the groups of Trump supporters and Black Lives Matter demonstrators each chose a representative to have a debate on the steps of the Capitol #Lansing #Michigan #Election2020 pic.twitter.com/YWywnczR21

“We want Donald J. Trump as our President for four more years” Protesters take to the steps of the Capitol to challenge this year’s election results in Michigan #Lansing #Michigan #Election2020 pic.twitter.com/VXXfgIV0LQ

In the city of Ann Arbor, BLM activists marched through the streets, erected barricades and blocked police cars from viewing the protest.

Police cars are blocked from viewing the march by protesters with banners patrolling the perimeter #AnnArbor #AnnArborProtests pic.twitter.com/2SgXwisBCe

​The protests, according to video shared in social media, blocked traffic on some streets.

​Marching through the streets where some diners were located, protesters chanted "Out of the restaurants and into the streets!".

“Out of the restaurants, and into the streets!” Protesters chant as they march past diners at outdoor patios in Ann Arbor #AnnArborProtests #AnnArbor pic.twitter.com/WqVjVafQ2x

​When one of the restaurant visitors tried to voice his discontent, a protester called him "grandpa" and told him to "sit down".

Protesters yell “Sit down, grandpa” at one diner that tried voicing his displeasure with them marching through #AnnArbor #AnnArborProtests pic.twitter.com/r76ukllWfo

​The protesters then reportedly flocked to the Capitol to conclude the demonstration.

Protesters return to the Ann Arbor Police and City Hall at the conclusion of tonight’s march #AnnArbor #AnnArborProtests pic.twitter.com/xTYmakbizJ

​After the US presidential election, several cities have seen protesters taking to the streets to challenge the election results or voice their support for Joe Biden, who is projected by the US media to win the White House.

Despite that official results of the election are yet to arrive, many world leaders and celebrities have congratulated Joe Biden and his running mate, Kamala Harris, referring to them as "President-elect" and "Vice President-elect".

Sitting President Donald Trump is repeatedly claiming election fraud, demanding to stop the count of "illegal votes" and accusing the Democrats of attempting to "steal the election".

The ongoing Black Lives Matter movement in the US intensified after the May killing of Minneapolis resident, black man George Floyd, at the hands of police while in custody. The death sparked a wave of nationwide protest against police brutality and racism.