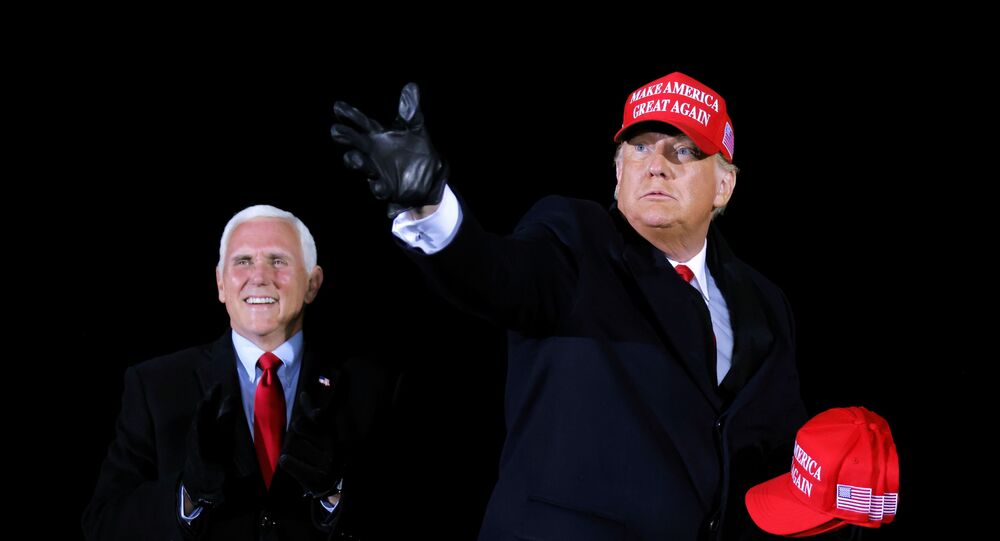 The fierce legal battle between Republican George W. Bush and Democrat Al Gore that stretched all the way to the US Supreme Court kept the results of the 2000 presidential election in limbo for over a month after the polls closed. Could history repeat itself 20 years later?

Despite Democrat Joe Biden declaring himself victorious in the presidential race, vote counting continues in several states and they are yet to announce the final results. At the same time, at least one of these states, Georgia, is currently heading to a mandatory recount triggered by the electoral laws there due to the extremely small margin between Trump and Biden.

The recount in Georgia could reduce or even completely eliminate Biden's lead over his Republican opponent, but the state's 16 Electoral College votes alone will not be enough to tip the scales in Trump's favour, as he is currently projected to lose according to preliminary results in Nevada, Pennsylvania, and Arizona. However, POTUS is so far not planning to give up, as he has promised to initiate several lawsuits to contest the election results in several states, including the aforementioned ones.

As the case of the 2000 US presidential election - when George W. Bush and Al Gore clashed in court over a recount in the state of Florida - revealed, the process might take well over a month. But could Trump repeat the feat of his Republican predecessor and gain victory through a legal battle?

If the margin between Trump and Biden remains as thin as it is now, Georgia's authorities will be automatically mandated to recount all the votes, but it is hard to tell who of the two candidates would end up victorious as a result.

Pennsylvania, which is currently leaning blue as well, also has a provision that mandates a recount if the margin between the two main candidates is below 0.5% - which was the case when 96% of the ballots had been tallied. Still, considering that the state is still counting the remaining mail-in votes, which are expected to be predominantly for Biden, the margin could widen, depriving Trump of a chance to change the tide in the state.

Nevada restrictions based on margins for a recount, but the state does not commence recounts automatically either. Trump will still be able to request a recount by providing a deposit equal to the approximate cost of the operation in hopes of eliminating the 2% margin that separates him from the Democratic opponent with 94% of the votes having been counted. The situation is similar in Wisconsin, where Trump may try to win back 10 Electoral College votes by applying for a recount – the state laws allow such requests when the margin of victory is less than 1%, which is the case in the 2020 presidential vote.

The prospect of a recount is even slimmer in Arizona, where it can only be performed if the discrepancy between the two candidates' results is smaller than 0.1%. According to Edison Research data, POTUS was trailing Biden with 48.9% versus 49.5% after 97% of votes had been tallied.

The experience of Al Gore's attempts to flip Florida in his favour in 2000 revealed that recounts were able to reduce Bush's lead in the state by a significant amount, but the endless recount requests from the Democrats were eventually stopped by the GOP’s lawyers before they could change the outcome of the election. In the final battle in the US Supreme Court, Bush's team managed to stop the recounts in Florida after SCOTUS ruled them to be unconstitutional. The justices based their decision on the fact that Gore's lawyers had requested new tallies only in the counties where they believed they could win a few new votes, but ignored the others.

In the context of this historical example, Trump has a chance to flip Pennsylvania and Georgia, but almost none in Nevada and Arizona. However, a recount is not the only instrument that Trump's legal team apparently intends to use.

Trump's personal lawyer Rudy Giuliani announced in the wake of Joe Biden claiming victory on 7 November that the POTUS’ campaign will be filing lawsuits over alleged voter fraud in two Pennsylvania cities - Philadelphia and Pittsburgh. Previously, the Trump campaign levelled similar allegations in Michigan. The leadership of the Michigan GOP reported that a software glitch had resulted in around 6,000 votes being erroneously counted in favour of the Democrats, and noted that similar programs had been used in 47 other counties. However, so far the Trump team's attempts to dispute the election results in Michigan have proven futile due to a lack of solid evidence proving fraud.

Trump has also repeatedly accused state election officials of preventing Republican poll watchers from fulfilling their duties and not letting them observe the process of counting votes in numerous states. It is unclear so far whether Trump's legal team will file more such suits in a bid to void the results of some counties or to force a recount – it is also unclear in which states they are planning to apply this tactic.

....This would ALSO change the Election result in numerous States, including Pennsylvania, which everyone thought was easily won on Election Night, only to see a massive lead disappear, without anyone being allowed to OBSERVE, for long intervals of time, what the happened...

Another ace that the Trump campaign may have up its sleeve is to force some states to discard votes that arrived late due to the unprecedented popularity of mail-in voting amid the coronavirus pandemic. Trump has repeatedly alleged that such votes are "illegal", claiming that many of the mail-in ballots were unverified and thus could purportedly have been used in voter fraud. One of the suits filed by Trump's legal team has already prompted the Supreme Court to order Pennsylvania to separate ballots that arrived late from those that were cast before the polls closed late on 3 November. However, the subsequent fate of these ballots remains to be determined.

At the same time, POTUS’ campaign is already waging a legal battle over purportedly rejected in-person votes in Arizona's Maricopa County. According to the campaign's claims, local poll workers ignored ballot machine errors indicating overvotes on ballots and pressured voters to push a button to override the error while leaving a person's vote unregistered.

It remains to be seen how many such lawsuits Trump's legal team will file in the coming days. Should these cases reach the US Supreme Court, as was the case with Bush vs Gore in 2000, the Republicans have a slightly better chance of winning them, since currently 6 out of 9 justices are Republican-appointed with 3 of them having been added to the court by President Trump himself. At the same time, all 9 justices are supposed to be unbiased and may not rule in favour of Trump in his lawsuits if they do not have credible evidence of violations in the process of casting or counting the ballots in the key battlegrounds states.