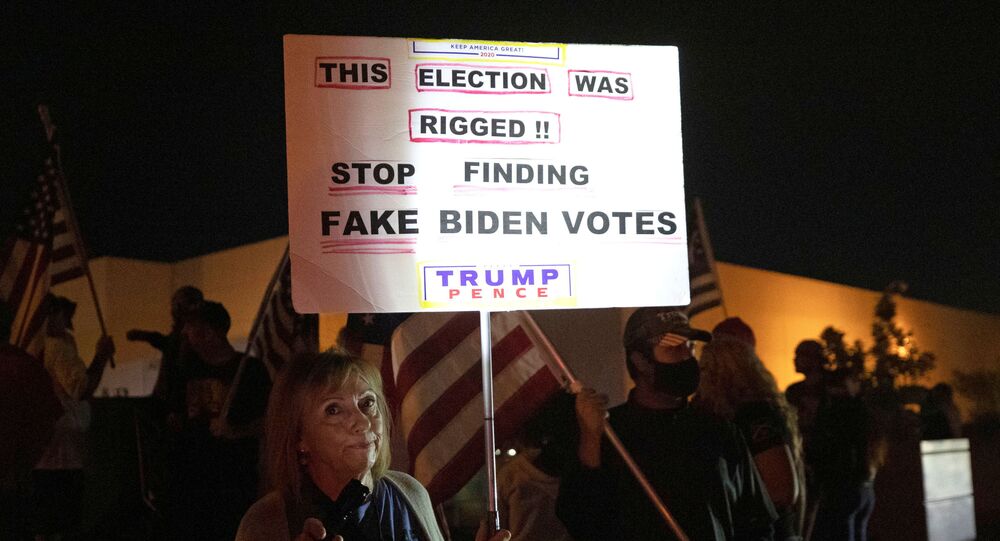 While the vote counting still continues in the US, several key states, most notably Pennsylvania and Georgia, have recently flipped from leaning towards Trump to Biden over the course of the last few days.

US President Donald Trump has renewed his criticism of the practice of the state voting authorities receiving mail ballots after the polls closed on 3 November, arguing that these ballots were counted illegally and drastically changed the results of the election there, which are yet to be officially announced.

POTUS went on to slam authorities in Pennsylvania for purportedly preventing GOP observers from witnessing the counting process, resulting in Trump losing his lead over Biden in the state. He claimed that local officials went to great lengths to prevent the observers from having access and that "bad things happened inside" the polling stations as they counted the ballots unobserved.

....Bad things took place during those hours where LEGAL TRANSPARENCY was viciously & crudely not allowed. Tractors blocked doors & windows were covered with thick cardboard so that observers could not see into the count rooms. BAD THINGS HAPPENED INSIDE. BIG CHANGES TOOK PLACE!

The Trump campaign has been demanding to stop counting votes that came by mail after the polls closed, calling such ballots "illegal". They also accused Democrats of engaging in voter fraud, which combined with the "illegal" ballots turned the tide in favour of Biden in several key states recently, specifically Michigan, Georgia, and Pennsylvania.

These allegations were rejected by state officials, but the president's campaign vowed to dispute the election results in the Supreme Court, demanding to stop counting and to throw out the so-called "illegal" votes. So far, this has only resulted in the Supreme Court ordering Pennsylvania authorities to segregate all ballots that came in late as the court continues to review the suit.

© REUTERS / Carlos Barria
Some of Trump's Advisers Reportedly Want to Convince POTUS to Admit Defeat Without Conceding It
The president also announced that his legal team would be fighting to initiate a recount in the states, where election fraud allegedly took place. One such suit, in Michigan, was discarded by a US judge over a lack of evidence. At the same time, Georgia's Voting System Implementation Manager, Gabriel Sterling, announced that the state, where Trump recently lost his lead, will initiate a recount due to the razor-thin margin between the two candidates there.

According to Miriam J Ramirez MD, former Puerto Rican senator and political analyst, many Americans might lose faith in the elections after the 2020 vote, which will be the "downfall of the American way of life".

"If there was 'hanky-panky' or not, I wish we find out and put some decency in this election or future elections. Who's ever going to trust the elections anymore? President Trump will defend his position through the Supreme Court not just because he has a Supreme Court judge that is a conservative, but that's our only bastion right now", the ex-senator says, alluding to the recent confirmation of Trump's SCOTUS pick, Judge Amy Coney Barrett to the Supreme Court that has given a 6-3 conservative majority to the bench much to the disappointment of the Democrat leadership which denounced the nomination process as "rushed" and "unprecedented".

But what has made everybody nervous, as per Ramirez, is that mostly all of the mail-in votes that have been found are for Biden, and she insists that the United States needs a thorough investigation into the postal voting and ballot counting over possible fraud.

"I mean, they find, let's say, ten thousand votes in a box and there's none for Trump. So they apparently were prepared to purposely include them in the vote count so that he would get all those extra votes and there are witnesses to that. They have one video where people are just filling in empty ballots. I hope that the United States has a very strong investigation into this and not just cover it up because it just alerts you that we could have problems with elections that the United States is very proud and brags about how the electoral process is and how democratic it is", she says.

The former senator believes that when something like this "ruins" the election, "it's not going to be good for us and for the people living in the United States and those people around us that keep an eye on this".

Miriam Ramirez is convinced that Donald Trump "will fight until his last breath" and challenge the outcome of the election as US media are already touting Joe Biden as "president-elect".

"I don't know whether he will be successful because I don't know the people that are going to be making those decisions. But I think he will fight until his last breath. And I am a little bit comforted by the fact that he has three men that are watching over this very closely and given their face to this problem. One of them is the ex-major of New York, Rudy Giuliani. When Rudy Giuliani ran for mayor of New York, I traveled from Puerto Rico to campaign for him. But he has been there since he was mayor and he has been very respected in the political field and he has been very close to President Trump since day one".

She continues: "The other one is [former] Governor [of Arkansas Mike] Huckabee. He also is a very respected man. Huckabee is right there talking for the president like Giuliani. And the third one is Newt Gingrich, who I think is a smart guy. He was speaker of the House of Representatives in the United States, the first Republican after 40 years. But he became speaker of the House, and the House had not been Republican for 40 years. He is an incredible politician. And all three of them are standing up for Trump and taking the lead on directing the people to what's going on. And I don't think they're going to hurt the reputation or say something that will actually make them be seen as irrelevant. I think that they're going to stay in there with him and they keep saying 'we're going to win this' all day, 'we got the votes, we got the evidence we're going to win this'".