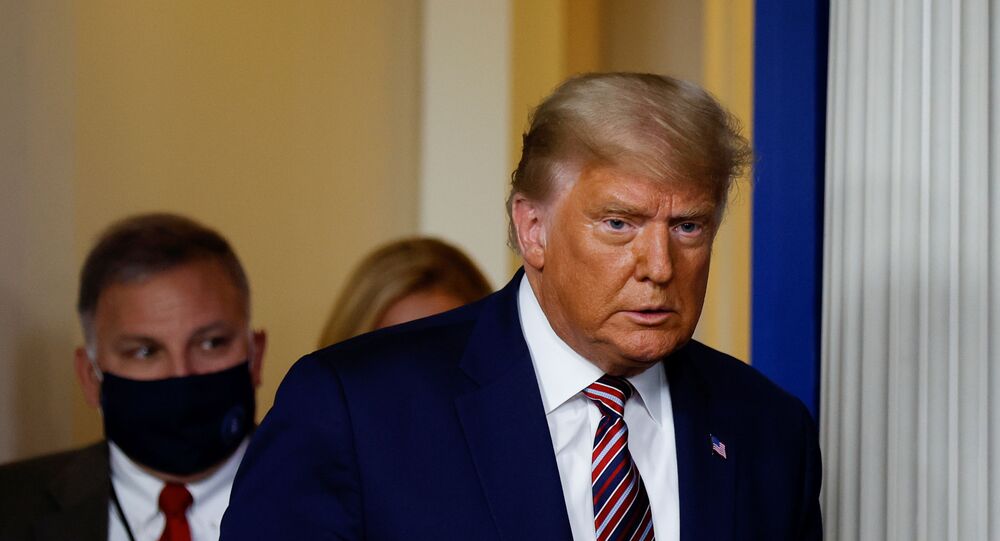 Despite polls closing days ago, the vote counting continues in the US election, with both the Republican and Democratic candidates battling for the coveted 270 Electoral College votes needed to win the presidency.

While many of US President Donald Trump's advisers are still confident he can win the election, some of his aides are considering how to convince POTUS that he has lost and admit his purported defeat, several US media outlets, including The Washington Post and CNN reported, citing anonymous sources.

Both Trump and Biden insist that they are on a path to victory, but the counting still continues in several key states. Two of them, Pennsylvania and Georgia, leaned red on election day, but turned blue on 6 October. Election officials in Georgia expect a recount in the state due to the razor-thin margin between the two candidates in the preliminary results.

The numbers tell us a clear and convincing story: We're going to win this race.

However, despite the potential to dispute the election results in court, several Trump advisers have discussed the possibility of defeat with the president and his subsequent actions in such a scenario, The Washington Post reported. The newspaper's anonymous sources claim Trump will evenutally commit to a peaceful transfer of power should Biden be proclaimed the winner in contrast to other reports floating around ahead of the election and in a recent piece by Vanity Fair.

At the same time, WaPo's sources said there has been no talk of Trump giving a concession speech. According to the POTUS "allies" cited by the newspaper, he will instead continue on with his accusations that the election was "stolen" from him.

Still, even making Trump admit defeat might prove difficult and, right now, some of the president's closest allies are trying to "calm" him down to come to terms with such a possibility, The Washington Post said citing anonymous sources. Another issue with such a scenario, according to the newspaper's sources, is that no one is ready to be the bearer of bad tidings.

"They know he's lost, but no one seems willing to tell King Lear or Mad King George that they've lost the empire", one anonymous Republican told the newspaper.

Among the likely candidates to be the bearer of bad news is the president's daughter Ivanka Trump, and her husband and Trump adviser, Jared Kushner, CNN claims citing people close to POTUS. It is still unclear if they will be ready to take on such a role, considering that Ivanka supported her father's calls not to count "illegal votes" and Kushner reportedly being in charge of assembling Trump's legal team to fight for a recount in key states.

According to CNN's sources, the potential messenger might build the conversation around the notion that a prolonged dispute over the election results might damage Trump's business and prospects for a political future. Another possible strategy, according to WaPo, might be advisers pitching him the idea that he exceeded all expectations despite a raging pandemic and assured the GOP's projected victory in the Senate and increase in seats in the House.

Despite polls closing over three days ago, the vote counting continues in several key states including Michigan, Nevada, Georgia, and Pennsylvania. Several of these states flipped from red to blue, with Trump's campaign claiming voter fraud took place in these states. The president's team alleged there have been irregularities in the vote count, with a multitude of votes being cast for the Democratic candidate at the end of the counting process, filing a suit in Michigan to demand a recount. A US judge dismissed the latter, however, as being based on "hearsay".

I had such a big lead in all of these states late into election night, only to see the leads miraculously disappear as the days went by. Perhaps these leads will return as our legal proceedings move forward!

Biden is ahead in Nevada, Georgia, and Pennsylvania, but the counting there continues due to the sheer number of mail-in votes and those that arrived after the polls closed on 3 November. The Trump campaign filed several suits demanding to stop the counting of what they described as "illegal" votes, but so far has failed to achieve any success. The US Supreme Court later ordered to segregate Pennsylvania ballots that arrived after 3 November, until SCOTUS finishes reviewing Trump's suit demanding to exclude them from being counted. In addition, Georgia's Voting System Implementation Manager, Gabriel Sterling, said the state will not ascertain the results of the election until it conducts a recount due to the narrow margin between the two candidates.

Despite the ongoing counting and looming legal battles that might shift the tide of the election, both Trump and Biden have already proclaimed they are on the path to winning the election. However, such remarks have been flagged by Twitter as not reflecting the official result of the election, which is yet to be announced.