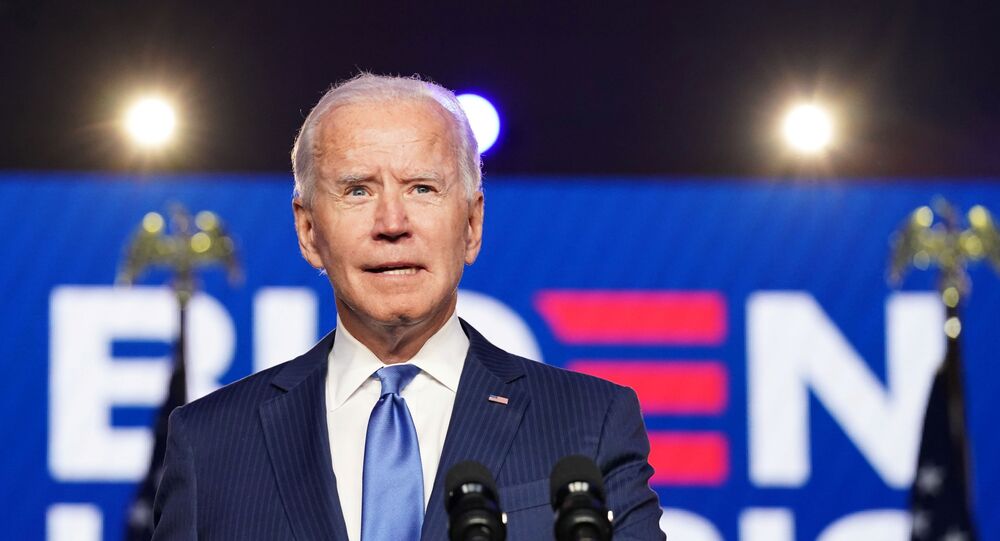 Biden Says There Is No Final Declaration of Victory Yet, Expresses Confidence in Win

While some key battleground states are still counting votes, the final outcome of the US presidential election remains unclear.

Delivering his remarks in Wilmington, Delaware, Democratic candidate Joe Biden has expressed confidence that he is going to win the presidential race, noting that "there is no final declaration of victory yet".

"The numbers tell us a clear and convincing story: we're going to win this race", he said during his speech.

Biden went on to say that he is on the way to getting more than 300 electoral votes, asserting that he won in the battleground states of Arizona and Nevada.

"What is becoming clearer each hour is that record numbers of Americans — from all races, faiths, regions — chose change over more of the same. They have given us a mandate for action on COVID and the economy and climate change and systemic racism", Biden continued.

The Democratic candidate also said he will not allow ballot counting to be stopped, urging people to remain calm and patient over the ongoing vote count.

He concluded his speech, expressing hope to talk to Americans "tomorrow".

"l want you to know that I'll work hard for those who voted against me as those who voted for me. That's the job … it's called the duty of care for all Americans", he added.

Tensions are mounting around the election results as ballots from several key battleground states are still being counted. Biden has so far claimed 264 electoral votes, and President Trump has 214, while the number needed to declare victory is 270.

At the same time, a recount is expected in Georgia and the Trump campaign has also requested a recount in the state of Wisconsin. A recount may also be requested in Arizona, Nevada, North Carolina, and Pennsylvania, which are all still processing votes.