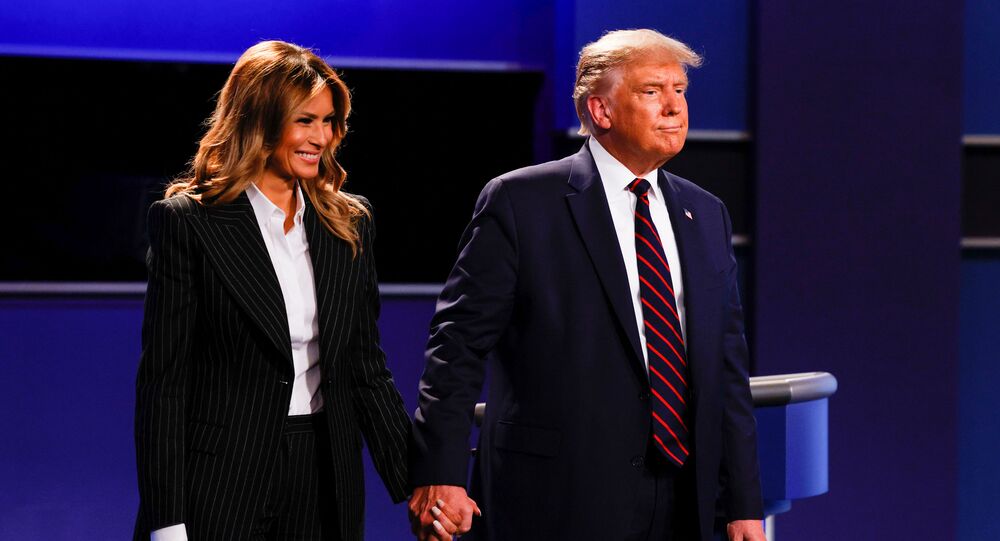 In American politics the expression October Surprise is a news event, either orchestrated or spontaneous that changes the course of the presidential election, which is held in November.

Social media users questioned whether the news of Donald and Melania Trump contracting coronavirus could qualify as an October Surprise, influencing the result of the forthcoming presidential elections in the US.

Earlier today Trump tweeted that he and his wife tested positive for COVID-19 and that they would go into quarantine.

​The news sparked a flurry of comments on social media.

I’ve been covering politics a long time, but I’ve never seen anything like this! #TrumpHasCovid

​Many users claimed that Trump faked his diagnosis because he wanted to skip debates with his rival Joe Biden or to gain support of voters.

I don't believe he has it. I think it's just a convenient way to save face after his abysmal debate performance; the electoral equivalent of his Vietnam-era "bone spurs" claim. His ego wouldn't accept it otherwise, and he certainly wouldn't disclose. It's just another lie.

So this is our October surprise

I will put nothing above Trump when it comes to trying to win this election. The last couple of weeks have been increasingly bad for him and he knows it

This announcement will be the feather in his cap or the nail in his coffin.

​Other users doubted whether the news could be called October Surprise and wondered if the presidential debates would be cancelled.

Does this mean the next debate is canceled?#OctoberSurprise

Many users added that his contracting the virus is the least surprising piece of news in the whole saga, given the blistering contempt he displayed for the risk of the disease and safety measures to control it.

How about now @realDonaldTrump? NOW will you please tell the American people to protect themselves by wearing masks and avoiding crowds?! #TrumpHasCovid #TrumpCovid #OctoberSurprise

​Others stressed that 2020 had already given the world enough surprises.

I think we can all agree that this is enough surprises for October. We’re good, October.

Is this the October surprise? I certainly hope both of them and the @GOP take this seriously now. Hoping and praying for their recovery. #TrumpHasCovid https://t.co/T4C5kxU9rE

In 1972, Republican Richard Nixon ran for re-election at the time when US was fighting War in Vietnam. Days before the vote, his security adviser Henry Kissinger says that "peace is at hand". The announcement resulted in Nixon supporters flooding rallies with placards hailing the end of the war.

In 1979, the US embassy in Iran was stormed by radicals and 52 diplomats were taken hostage. The administration of Democrat Jimmy Carter held negotiations with Tehran over the release of American citizens and everything pointed to a speedy resolution. However, on 21 October Iranian Prime Minister Mohammad-Ali Rajai unexpectedly said that the hostages would not be released. This ruined Carter’s chances to win election as previously Republicans drew attention to the fact that the prolonged captivity of US diplomats was a proof of his administration’s weakness.

Reagan won by a landslide although conspiracy theorists were convinced that Reagan had made a secret deal with the Iranian government to delay the release of hostages.

In 2000, the governor of Texas, George W Bush is locked in a tight race with Democrat Vice-President Al Gore. Five days before the vote US media reports that Bush was arrested in 1976 for drink driving. Bush supporters claim the Gore campaign leaked the episode, and Bush himself accuses the Democrats of "dirty politics".

Gore won by the popular vote, but the US Supreme court halted a re-count of disputed ballots initiated by the Florida Supreme Court. This gave Bush a majority of votes in Electoral college and victory in the presidential election.

Four years later and the US is up to its neck with wars in Afghanistan and Iraq. Less than a week before the election, Al-Jazeera broadcasts a video with Osama Bin Laden, one of the masterminds of the 9/11 attacks on the US, where the former number one terrorist taunts Bush and threatens United States.

Bush uses the footage in his campaign, saying only he could defend America from terrorist threats. Bush comfortably wins that election.

On 7 October 2016, the Washington Post released a video showing Trump making lewd comments about kissing and groping women. "When you’re a star, they let you do it. You can do anything. Grab them by the p***y”, Trump said in the video, causing several in his own party to withdraw their endorsement of him. Then on 28 October, the then FBI Director James Comey informs the Congress that the bureau is investigating allegations that Hillary Clinton, Trump’s rival at the 2016 elections, used a private email server during her tenure as Barack Obama's Secretary of State.