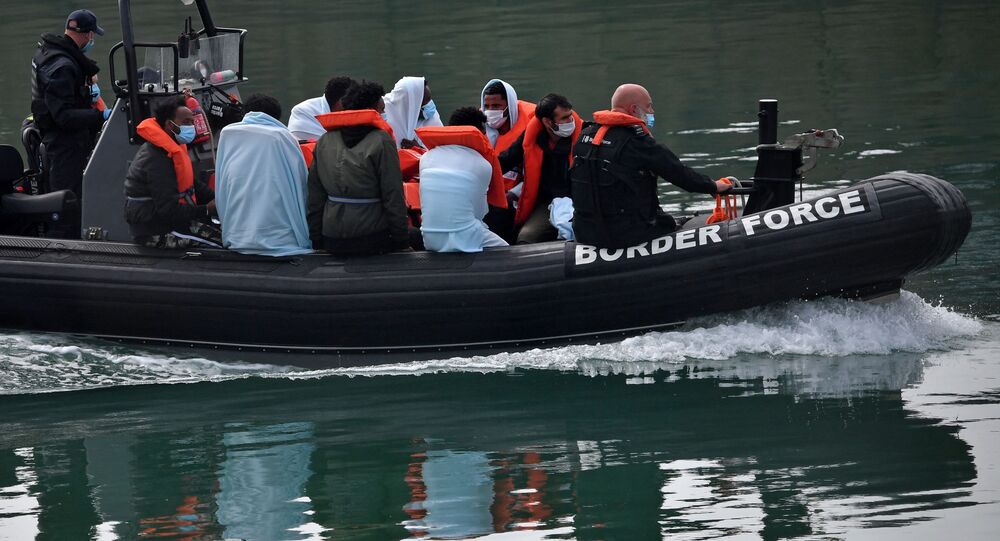 Earlier this week, British lawmakers supported a new immigration bill stipulating that arriving in the UK without permission is a criminal offence. The move came as Monday saw the highest daily number of migrants sailing across the Channel to enter Britain.

The Daily Mail has made public the results of a month-long investigation that exposed a "ruthlessly efficient international criminal network" involved in trafficking migrant boats across the English Channel.

The UK is now trying its best to prevent asylum seekers from crossing the border in France and making their way to Britain illegally. Earlier this week, the number of migrants arriving in the UK by boat in 2021 hit almost 8,500, more than the entire tally last year.

© AFP 2021 / DENIS CHARLET
Policemen stand guard next to truck queuing to board a ferry to Great Britain to prevent migrants to reach the UK illegally, on September 10, 2014 in the French port of Calais

The newspaper cited an unnamed intelligence source as saying that it would be naïve to think the asylum seekers are buying "the odd boat from a French coast hyper-market and launching it by themselves from the beaches".

"The reality is different. We are fighting international organised crime on a huge scale. The bosses at the top are multilingual, highly intelligent, sophisticated men. They don't care a lot for the migrants — they only want money. We desperately want to disrupt the business model of the traffickers. But it is slickly run through mobile phones and the internet with the super-efficiency of a winning army", the source said.

Another unnamed insider referred to the "limitless" number of migrants heading for the UK through Europe. Many of them "genuinely want a better life", while others are "strangers who hide their true identities and may be a danger to Britain's security", according to the insider.

One more source who spoke on condition of anonymity told the Daily Mail that the trafficking network's "tentacles stretch from Iran and Iraq into Turkey to Europe and the UK".

© AFP 2021 / BEN STANSALL
Waleed (3L), 29, a Kuwaiti migrant, stands with other migrants onboard the DHB Dauntless tug boat as they are brought to shore by the UK Border Force after illegally crossing the English Channel from France on a dinghy on September 11, 2020, in the marina at Dover, on the south coast of England

They insisted that the gangs who run the Channel boat operations are "mainly Iraqi and Iranian Kurds", while some "have dual nationalities and flit regularly from Erbil and Sardasht to their fine houses in Holland, France, Germany, and Britain".

"Others lower [down] in their network are Kurdish who have settled in Europe or been drawn into gangs as cash-paid 'runners' or 'facilitators' as they wait in France, often penniless, hoping to cross the Channel", the source added.

The Daily Mail referred to a cafe in Dunkirk, France, where "trafficking gangs with links to Iran, Iraq, and Turkey busily drum up trade for cross-Channel journeys".

The newspaper described the Dunkirk cafe as an "international hub with links to criminals who each night, with military precision, orchestrate the migrant sailings to Dover and along our south coast".

As far as the "efficient and methodical" trafficking operation is concerned, the key factor here is confidentiality, the Daily Mail reports, citing an unnamed German immigration officer as saying that "secrecy is enforced ruthlessly".

© REUTERS / JEFF OVERS/BBC
UK Home Secretary Priti Patel Urges Social Media to Delete Posts 'Glamourising' Migrants Crossing Channel
As for the journey of the boats themselves, it "often starts in Istanbul", a logistics expert told the news outlet, adding that "the traffickers use the holds of long-distance inter-city buses to bring them from Turkey [where borders are notoriously porous] to secret holding areas in Germany before they are taken on to France".

UK police sources have, meanwhile, told the Daily Mail that the current rate for a Channel crossing stands at £6,000 ($8,230) per person, with about £55 ($75) million reportedly paid to the traffickers in the past six months.

"Cocaine, illegal arms, all destined for our cities' streets, are financial child's play against the trafficking of migrants to this country", the sources claimed.

The probe by the Daily Mail comes after UK Home Secretary Priti Patel praised the Nationality and Borders Bill. The latter is set to address the country's "broken asylum system" and "break the business model" of people involved in facilitating illegal crossings into Britain.

The bill, which passed its second reading in the Commons on Tuesday, will allow Border Force officers to turn back migrant boats attempting to cross the Channel from France and use "reasonable force, if necessary".