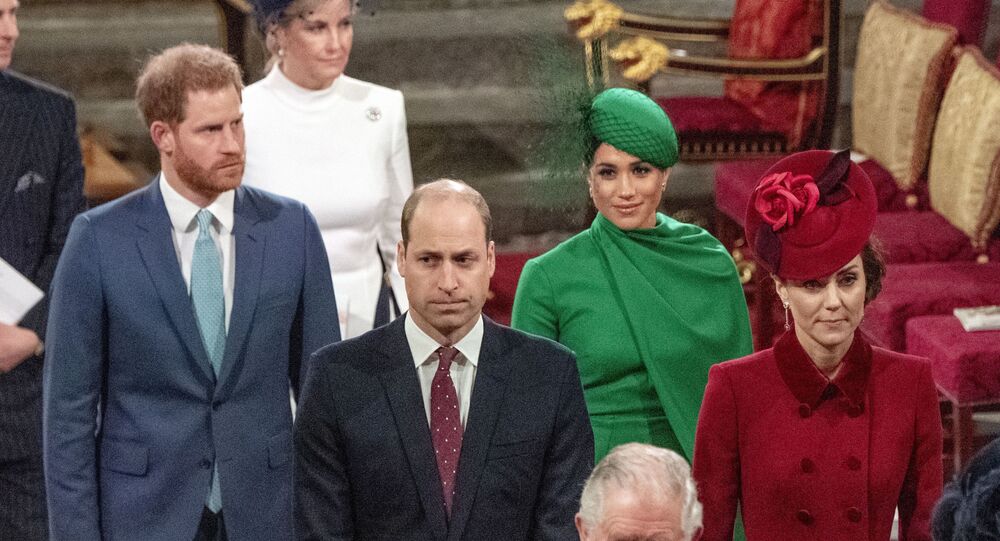 Prince Harry's Tell-All Memoir is Not a 'F**k You' to the Rest of the Royal Family, Report Says

Relations between the Duke of Sussex and other members of the family have reportedly been strained ever since he and his wife Meghan Markle decided to quit royal life. The ties are said to have deteriorated even further after the couple gave an interview to Oprah Winfrey in which they made several sensational accusations against the family.

Prince Harry does not consider his tell-all memoir to be a "f**k you" to the rest of the family PageSix has reported, citing its sources. According to them, the Duke of Sussex views the book as a way to reflect on his life and not to deliberately hurt his relatives, including his father Prince Charles and brother Prince William. The book is not an attempt to leave his family behind once and for all, he will simply be telling his "truth", sources told PageSix.

Royal insiders who spoke with the outlet, seem to disagree. "On what planet does Harry think that this is not a f**k you to the family", one insider said. The British media reported that even members of the family Harry has remained close to, such as Princess Beatrice and Princess Eugenie, have been "stunned" by his plan.

Final Nail in the Coffin

Earlier this week, US-based publisher Penguin Random House announced that Prince Harry's tell-all book on his life inside Buckingham Palace will be released late in 2022. Prince Harry said he will donate the proceeds from the memoir penned by ghostwriter J.R. Moehringer to charity, but there has been no information whether the Duke plans to give away his $20 million advance.

Unveiling the news, the 37-year-old royal wrote the following:

"I'm writing this not as the prince I was born but as the man I have become. I've worn many hats over the years, both literally and figuratively, and my hope is that in telling my story — the highs and lows, the mistakes, the lessons learnt — I can help show that no matter where we come from, we have more in common than we think. I'm deeply grateful for the opportunity to share what I've learnt over the course of my life so far and excited for people to read a firsthand account of my life that's accurate and wholly truthful".

The announcement is said to have caused an uproar inside Buckingham Palace, as the UK media reported senior members of the family, including the Queen and heir to the throne Prince Charles were not informed about the upcoming plans.

The news comes as the Royal Family continues to reel from the bombshell interview with Oprah Winfrey, released in March, in which Prince Harry and Meghan Markle made several sensational accusations against the palace. The couple hinted that one member of the family was racist and claimed that the Palace was spreading falsehoods about them. Following the interview, Prince Harry gave several other interviews in which he portrayed his relatives, including his father Prince Charles, in an unflattering light.

UK media outlets described the news about the upcoming memoir as the "final nail in the coffin of the Royal Family's relationship with Harry", and royal insiders saying that ties between the Sussexes and the rest of the Firm are at "breaking point".

One of the biggest concerns voiced by royal experts is that the Palace won't be able to challenge whatever Prince Harry says in his book, as according to an unspoken rule, the Royal Family does not comment on issues between family members.

Another concern is that the memoir will take the shine off the Queen's Platinum jubilee. In 2022, Her Majesty could become the first British monarch to celebrate seventy years of service. Prince Harry, Meghan Markle, and their children were expected to attend the celebration, but after the tell-all memoir was announced the UK media reported that the monarch may rescind the invitation.

"Her Majesty has been at great pains to try to keep her relationship with her grandson and his family separate from the decisions she needs to make professionally, so to speak. And the invitation for them to join her next year was a genuine one. Although things have been very difficult, there was a small, but enduring hope that enough time would have elapsed for things to heal. But the feeling internally [now] is that this book will be the last straw", an insider told the Daily Mail.