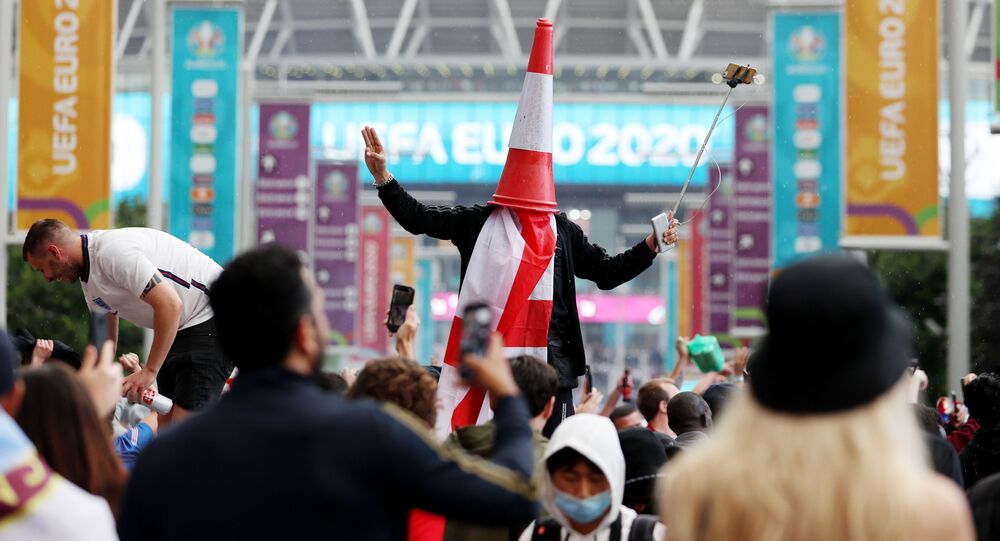 Accusations of enabling racism were made by the leaders of both the Conservative and Labour parties against each other during a parliamentary session on Wednesday, following a racism scandal in the aftermath of Euro 2020.

UK Prime Minister Boris Johnson told the House of Commons that those committing racist abuse online will be banned from attending football matches.

"You will not be going to the match – no ifs no buts", Johnson said during Prime Minister's Questions (PMQs), when challenged by Labour leader Keir Starmer.

Starmer brought up the issue of division in the Conservative Party over the handling of the racism issue. He spoke of a Conservative MP who admitted he felt "very uncomfortable" with his own party's position on anti-racism.

"We can all see what's happened here. The government have been trying to stoke a culture war and now they've realised they're on the wrong side and now they hope no one has noticed", Starmer said.

He also mentioned Tory MP Natalie Elphicke who recently said that England player Marcus Rashford should have focused more on his game than on "playing politics".

Finally, Starmer launched an attack against the position voiced by UK Home Secretary Priti Patel, who said footballers taking the knee before the games was "gesture politics".

Before the Euro 2020 tournament, the PM backed England team players who take the knee, but stopped short of criticising booing. During the PMQs, the PM said the Conservatives never supported booing the players for taking the knee.

The PM also defended the home secretary, adding that Patel had faced "racism and prejudice all her career".

Following England's defeat in the final of the Euro 2020 tournament, waves of racist commentary were seen on social media, targeting players of colour on the team.

Some Labour MPs reacted to the abuse by accusing the Tory government of "laying the foundation for it".

The Government had multiple opportunities to condemn fans booing England players for taking the knee. They refused.

It's not good enough to turn around now and condemn racist abuse, when their words and actions helped lay the foundation for it. pic.twitter.com/3xThakEVgR

Glad Boris Johnson has finally realised it's wrong to boo England players for taking the knee.

But that doesn't change the fact that senior Tories consistently defended it.

Where are you @pritipatel? Pathetic.

Why haven't you turned up to Parliament to take questions from MPs on the racism targeted at England players?

Why are you too scared to take responsibility for your actions & apologise for stoking up the racism they've faced in recent days? pic.twitter.com/hr1VToCYLI

We've been waiting since 2017 for a law on online harms. The Tories have watered it down. Boris Johnson may have met with social media companies in Downing Street but it's clear who is in control in that relationship #PMQs #onlinesafetybill

When accused of stoking a "culture war" by Starmer, Johnson said ​he didn't "want to engage in a culture war of any kind".

"Give me a break", Starmer retorted in frustration.

© REUTERS / POOL
State Opening of Parliament at the Palace of Westminster, in London

She praised the England team and condemned the online trolls for overshadowing the players' success at Euro 2020.

Atkins said that the government's online safety bill will "put in place measures to tackle illegal and legal, but harmful, abuse including racism".

She then warned social media and other online platforms to act quickly on tackling racist abuse.

"Let one message ring loud and clear to those companies: there is no reason for companies to wait until the regime is fully running to take action against this abhorrent abuse", the minister added.

She, however, suggested that tech companies don't "quite understand" the frustration of everyone trying to hold them responsible.

Her comment came as Labour's Yvette Cooper, the chair of the Commons Home Affairs Committee, noted that the Instagram profiles of England players were still subject to "blatantly racist words and emojis that have been up for more than 24 hours".

While the discussion about online racism continued in the British Parliament on Wednesday, a 37-year-old man from Ashton-Upon-Mersey was arrested by the police in connection with social media posts directed against England footballers after the Euro 2020 final.