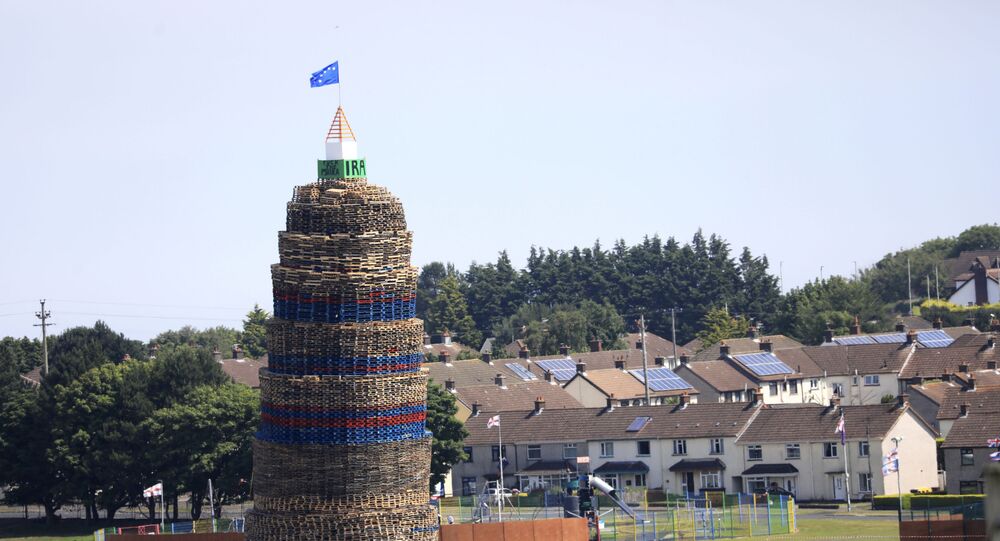 In 1690 the Protestant King William of Orange defeated the Catholic King James at the Battle of the Boyne. The victory led to a Protestant - the Dutch king - regaining the English throne.

Sunday night - 11 July - was the eve of the anniversary of the victory of the Protestant King William, or King Billy, during the Battle of the Boyne.

The moment Craigyhill bonfire in Larne topples. Large cordon was in place so the crowd were well back at this one. Some close calls elsewhere though #EleventhNight #bonfires #NorthernIreland pic.twitter.com/GylTD1YCGo

​It is commemorated with huge bonfires and this year two Sinn Fein ministers in the Northern Ireland government - Nichola Mallon and Deirdre Hargey -  tried and failed to get a bonfire in Tiger’s Bay in north Belfast banned.

The bonfire, festooned with Irish flags and Sinn Fein posters, was close to an interface with the Catholic New Lodge estate. A court on Friday, 9 July, rejected the legal action.

© REUTERS / CLODAGH KILCOYNE
Jeffrey Donaldson, who became leader of the DUP on 22 June 2021

DUP leader Sir Jeffrey Donaldson said: "We can celebrate our culture and tradition in a respectful way. Respect is a two-way street, if you want to gain respect for your tradition and culture you have got to show respect for the traditions, cultures, symbols of other communities.”

​On Monday, 12 July, the 35,000 members of the Orange Order are taking part in marches and parades across Northern Ireland to mark the victory in 1690, which also sealed the dominant position of Protestants in Ulster.

Because of COVID-19 restrictions the Orangemen are holding 500 smaller parades rather than the usual 18 large events.

Respect social distancing and the other Covid-19 guidelines when on parade today. pic.twitter.com/Lma46hJwQW

​Earlier this year the DUP was enraged when the Police Service of Northern Ireland decided not to prosecute senior Sinn Fein leaders who had taken part in a mass funeral for former IRA man Bobby Storey last year in breach of COVID-19 restrictions.