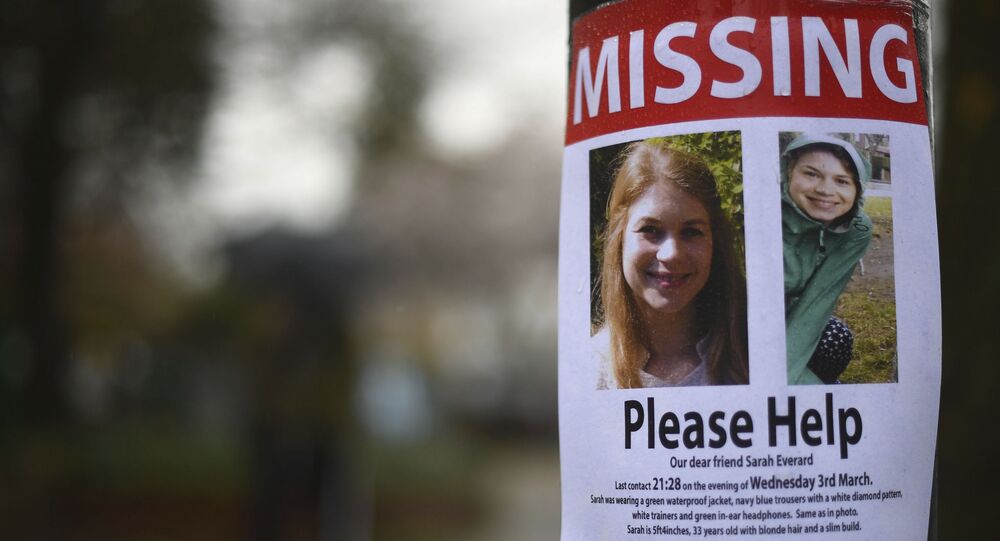 The shocking killing of the young woman triggered wide public discontent over women's safety in the United Kingdom, which was even reinforced after it was revealed that her murderer was previously known for "flashing" incidents on multiple occasions but was never charged or at least investigated by the authorities until recently.

According to a report by The Sun, Couzens — a serving police officer and a married father of two — was nicknamed "The Rapist" by his ex-colleagues at the Civil Nuclear Constabulary (CNC), where he worked prior to applying for the Met’s Parliamentary and Diplomatic Protection Unit in 2020. The "flattering" nickname was reportedly given to Couzens — now a convicted rapist — because he "gave women the creeps", as the UK newspaper put it.

This comes as sickening revelations emerge that Couzens had been caught engaging in indecent behavior long before he attacked Everard. British media reported that in 2015, he was spotted driving naked from the waist down in Dover, Kent, and three days prior to murdering Everard, he flashed his genitals twice at a McDonald’s restaurant in Swanley, Kent.

• Linked to indecent exposure in 2015

• Nicknamed ‘The Rapist’ by ex-colleagues pic.twitter.com/1QrcJAhkVC

The Met was reportedly in need of personnel when they decided to hire Couzens, following the Paris terror attacks in 2017 and heightened security risks. That could likely explain why he did not serve two years on probation and was not subject to enhanced vetting. If it did take place — he would have been almost certainly denied a position and the tragedy could have been avoided.

The Sun cited ex-Met detective chief inspector Mick Neville, who said: "There is a catalogue of failures. He could have been found out as a sexual deviant. If those had been done properly, he would have been drummed out of the police and it is likely Sarah would still be alive."

Following Everard's death and statements made by other women who reported Couzens' deviant behavior, UK activists are calling on the government to conduct an inquiry into the British police's negligence. Questions have been raised as to why they did not look into earlier reports of misconduct on the part of Couzens and why the police neglected them, as the Civil Nuclear Police Federation confirmed no one officially complained about him at his previous jobs.

Despite the reported misdemeanor, Couzens was still on the elite Parliamentary and Diplomatic Protection squad when he murdered Everard, which allowed him to carry a gun and a Metropolitan Police warrant card.

Wtf is wrong with the Met? pic.twitter.com/7aeXYzcMR2

Maybe his nickname being "The Rapist" might have been a bit of a red flag that Wayne Couzens was a bit of a wrong 'un? I dunno.

These are the people who are supposed to protect us 🥴🥴🥴

​"Wayne "The Rapist" Couzens? You can't discipline a person at work for their nickname. But if I heard an employee had a nickname like that, I'd be watching them like a hawk until I was sure it was only a horrible, tasteless joke. Or, in this case, not," a user tweeted.

The killer of Sarah Everard, Wayne Couzens, had been given the nickname "the rapist" by his colleagues, yet he was hired by the Met Police. How are women ever meant to feel safe when we hear that those who are meant to protect us have the worst of offenders in their ranks?

They didn't investigate his flashing incidents properly.
Was he tipped off by a colleague when he deleted his phone data before he was arrested?
It shows how little regard they have for women's concerns. Rape isn't serious to them. #TheRapist.

​"The Metropolitan Police and wider policing must look at vetting processes and their own safeguarding systems to ensure people who pose a threat to the public are not able to hold such vital positions of trust", Shadow Home Secretary Nick Thomas Symonds said.

The Metropolitan Police and wider policing must look at vetting processes and their own safeguarding systems to ensure people who pose a threat to the public are not able to hold such vital positions of trust. (3/3)

Meanwhile, criticism is growing against Dame Cressida, the Commissioner of the Metropolitan Police, with many calling on her to resign following the tragic events.

I think that if a serving Met Police officer Wayne Couzens was known as 'The Rapist' by his colleagues, and then went on to commit the horrific murder of Sarah Everard, then Cressida Dick's position is now untenable. She's been far from faultless in other areas.

When her officers called Wayne Couzens 'The Rapist' as a nickname????? I mean....seriously. The Met are a really bad joke. How's 'Operation Grange' going I wonder? £12,000,000 and counting to cover up the death of a three year old.

Serving police officers can literally be nicknamed the rapist by male colleagues for making female officers feel uncomfortable, and still go on to get a job in the Met. Cressida Dick said the Met were betrayed by Couzens. A crass comment at the time, deplorable in light of this.

The Independent Office for Police Conduct (IOPC) has launched a probe into alleged misconduct by Kent Police as it failed to look into the "flashing" reports involving Couzens in 2015, and a separate investigation is being conducted into alleged exposure incidents in London in February this year.

Sarah Everard's death triggered mass protests, with citizens stating that even today women do not feel safe on the streets of London. The public anger was reinforced by the fact that Everard was a random victim — Couzens never met her, never heard of her and had absolutely no connections to her prior to the day of the murder. This led many to assume that any other woman could potentially be in danger.