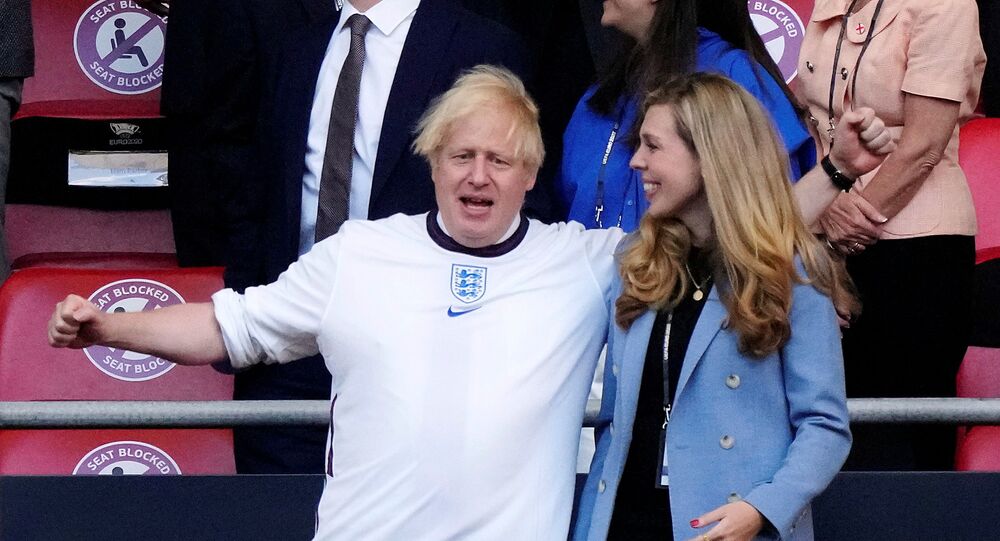 Boris Johnson was full of praise for England manager Gareth Southgate following the national side's 2-1 victory over Denmark in extra time, but would not be drawn on whether the coach would be rewarded with a knighthood.

British Prime Minister Boris Johnson has said declaring the day after the Euro 2020 final a national holiday would be "tempting fate".

Johnson expressed caution on Thursday against jinxing the result of Sunday night's European Championship final against Spain at Wembley after an official online petition to declare Monday a bank holiday in celebration passed the 100,000-signature threshold needed to trigger a debate in Parliament.

The PM was overflowing with praise for the England squad and their manager Gareth Southgate after Wednesday night's narrow 2-1 victory over Denmark in extra time — which Johnson attended with his newly-wed wife Carrie among the crowd of more than 60,000.

​Asked if the manager was up for a knighthood — as Sir Alf Ramsey received for leading England to victory in the 1966 World Cup, he was tight lipped.

"I obviously wouldn't want to anticipate anything that the honours people may decide, but clearly I think Gareth Southgate has done an absolutely outstanding job," Johnson said.

And when pressed on the bank holiday petition, Johnson answered: "I think that would be tempting fate, let's see what happens."

© REUTERS / FRANK AUGSTEIN
'It's Hard to Sum Up Into Words': Harry Kane Reacts to England's Euro Semifinal Win Over Denmark
But an official Downing Street spokesman later said the PM was not ruling it out.

"I don't want to pre-empt the outcome of Sunday's match," the spokesman said. "Clearly we want England to go all the way and win the final, and then we will set out our plans in due course."

The petition on the UK government website was almost at 200,000 signatures at 5pm on Thursday.

"England may be playing a European Championship Final at 8pm on Sunday 11th July," it read. "It would be beneficial and sensible to give the country the day off the next day if England win, in the form of an extra Bank Holiday Monday."

Journalist and legislative writer Ned Donovan pointed out that royal approval was needed to declare a public holiday.

​The PM landed himself in another controversy on Wednesday night when he was photographed leaving Wembley stadium in the back of a Range Rover without a face mask, despite his security detail and wife wearing them