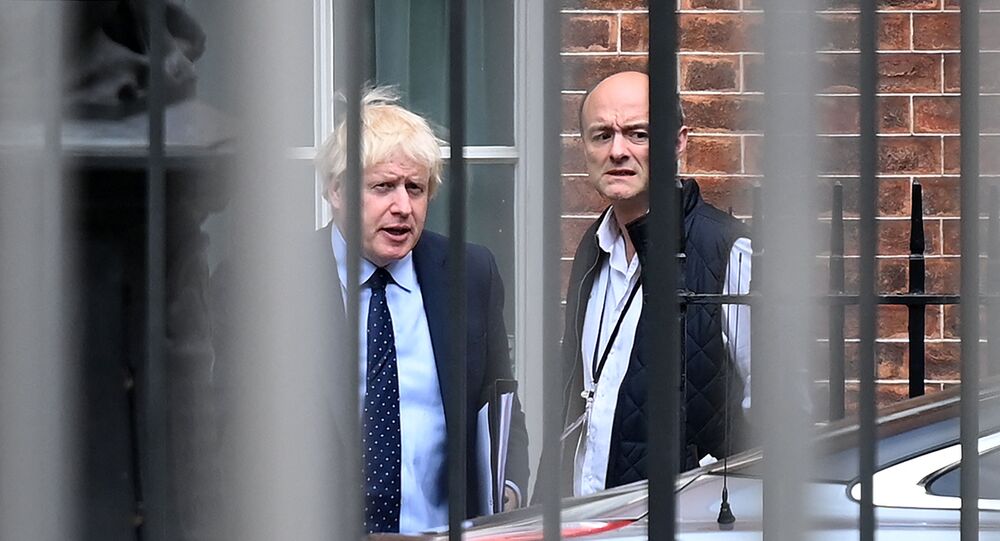 In late May, Dominic Cummings told UK lawmakers that Boris Johnson is "unfit for the job" of UK prime minister in light of the British government's handling of the coronavirus pandemic.

Boris Johnson admitted that it was "ludicrous" for him to be prime minister three years before he took the job, his former aide Dominic Cummings has argued.

In a new post on his Substack email newsletter, Cummings claimed that Johnson's admission came on 24 June 2016, the day after the EU referendum which brought victory to the Vote Leave campaign.

"Boris told me with a laugh, 'Obviously it's ludicrous me being PM - but no more ludicrous than Dave (Cameron) or George, don't you think?' I agreed and reminded him of the main elements of the deal we'd agreed with (Michael) Gove about what to do next", Cummings wrote.

The ex-Downing Street adviser insisted that he and his team were already aware that Johnson was "in any objective sense, unfit to be PM". According to Cummings, he agreed three years later to join Johnson in Downing Street because he believed certain "features of Boris that are in principle very bad in a PM can be turned to advantage".

Cummings argued that Johnson's character was divided into Normal Boris (Boris-N) and Self-Aware Boris (Boris-SA), which intensified only when BoJo's political future was in danger.

He added that Johnson "lies — so blatantly, so naturally, so regularly — that there is no real distinction possible with him, as there is with normal people, between truth and lies".

The UK prime minister "trusts nobody including his own family", will "sacrifice anybody for his career", and is "totally untrusted by anybody in No 10", according to Cummings.

In a question-and-answer session with his subscribers, Cummings also claimed it was "obvious" that Tony Blair would have done "a much better job" as prime minister during the COVID-19 pandemic than Johnson and that BoJo was "obviously" wrong to plan the removal of most of the social distancing rules on 19 July "against the advice of many scientists".

The PM's official spokesman has, meanwhile, said he doesn't plan "to engage with every allegation made", when asked about Cummings' blog by reporters.

The ex-Downing Street aide's new tirade is yet another salvo against Boris Johnson's government, which he has harshly criticised over the past few months. Last month, he slammed the UK prime minister as "a pundit who stumbled into politics and acts like that 99 percent of the time". This followed Cummings calling Johnson a "gaffe machine", who is "clueless about policy and government".

POOL
Cummings Says ‘Underestimated’ PM Johnson is a More 'Complex' Person Than His Predecessor Cameron
Yet, the former adviser's harshest criticism was directed at the UK government's response to the coronavirus pandemic. During the first wave, critics of the government accused Downing Street of a failed response, pointing to the shortage of personal protective equipment for medical workers, slow testing programme, and lack of a coherent strategy.

Johnson, for his part, bashed his former senior adviser's allegations, saying that some details in the ex-official's testimony "do not bear any relation to reality".

20 Points Ahead Yet? Tory Lead Over Labour Grows in Wake of Cummings Claims