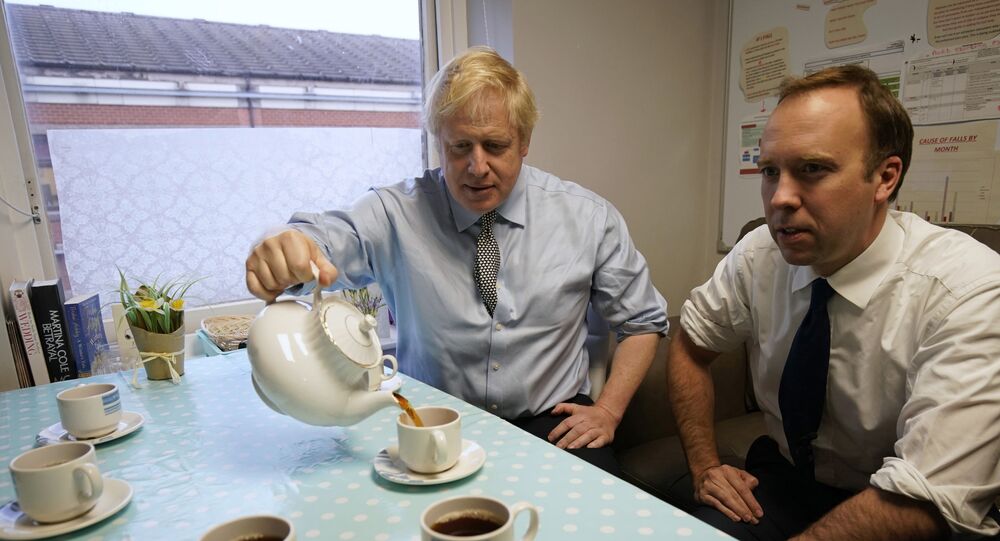 Last week, The Sun reported then-Health Secretary Matt Hancock had violated coronavirus safety restrictions after he was filmed cheating on his wife with an aide. Boris Johnson initially paid no attention to the scandal, with a Downing Street spokesman telling reporters that the PM had accepted Hancock’s apology and “considered the matter closed”.

Petronella Wyatt, ex-lover of UK Prime Minister Boris Johnson, has dismissed claims that the PM sacked Health Secretary Matt Hancock for breaching government rules on the coronavirus. On Monday, the prime minister seemingly made a U-turn, implying that he had fired the disgraced official.

"I read the [Sun] story on Friday and we’ve got a new health secretary in post on Saturday and I think that’s about the right pace to proceed in a pandemic", Johnson said.

Wyatt, who had an affair with the British PM between 2000 and 2004 when he was married to his second wife Marina Wheeler, has rejected the claim, quipping that "Boris can't sack someone for adultery because then he'd have to sack himself".

She then claimed that the main reason why the prime minister didn’t want to sack Hancock was that he needed to "use him as a human shield during the Covid inquiry".

"This is what I hear time and time again from senior Tories", Wyatt told the GB News television channel.

The COVID inquiry she referred to is a government investigation into the authorities' response to the coronavirus pandemic. Many accusations have been made against Boris Johnson's government, with critics pointing to the slow testing programme, shortage of personal protective equipment for medical workers, as well as the apparent lack of a coherent strategy.

Boris Johnson has been chastised for what critics described as his support for Matt Hancock. Dominic Cummings, a former key adviser to the prime minister who has launched several harsh attacks on Johnson and his government, suggested that the PM realised the gravity of Matt Hancock’s scandal after his wife started messaging him “89 texts per hour”.

What is the Scandal About?

As mentioned earlier, last week The Sun released footage that showed Matt Hancock kissing his aide Gina Coladangelo, both married, in his office.

​However, it was not the extramarital affair that caused the outrage, but the fact that the former health secretary was violating coronavirus safety restrictions that his own ministry had devised. Over the course of the pandemic, the government advised people not to hug their loved ones, stick to "established relationships", and maintain social distancing.

Back in May, when the footage was captured, England was at Stage 2 of the restrictions, which did not allow gatherings of two people indoors except for work purposes, but only if a gathering was "reasonably necessary".

At the beginning of the scandal, nothing suggested that Hancock would resign; however he reconsidered after 80 fellow MPs complained about him to the party’s whips.