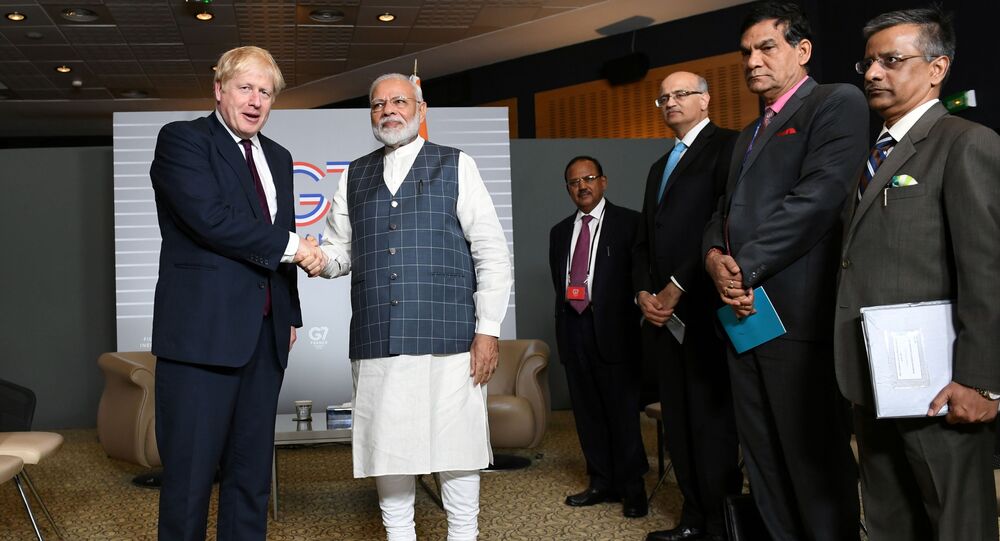 The Labour Party has long faced allegations of anti-Semitism. Now, the party’s canvassing material ahead of a by-election for the House of Commons constituency of Batley and Spen is calling on voters to reject the Tories due to Prime Minister Boris Johnson’s ties with India’s Hindu nationalist Prime Minister Narendra Modi.

Britain’s opposition Labour Party is facing criticism from its own supporters, including several of its members of Parliament (MPs), for pandering to Muslim voters with leaflets critical of Indian Prime Minister Narendra Modi ahead of the 1 July by-election in Batley and Spen, a parliamentary seat in West Yorkshire.

Some of the canvassing material being employed by Labour strategists cites the association between Prime Minister Boris Johnson and his Indian counterpart Narendra Modi in a bid to draw attention to the Tory leader’s “Islamophobia”, as per reports in British media.

Another poster featuring a picture of Johnson shaking hands with Modi reads, “Don’t risk a Tory MP who is not on your side”.

​Another leaflet states, “A Prime Minister who is silent on human rights abuses in Kashmir”.

Considered as a Labour stronghold in the House of Commons, around 10 percent of Batley and Spen’s population is of Pakistani heritage, as per the local Kirkees Council. The Muslim Council of Britain estimates that the House of Commons seat is one of 15 constituencies in the country where Muslim voters have a “high impact”.

Some Labour MPs have expressed disgust at the anti-Modi leaflets, with Stockport MP Navendu Mishra complaining that “racism is alive and well” within Labour.

Kim Johnson, the MP for Liverpool Riverside, said that there is still a “long way” to go to eradicate racism within Labour.

​Labour Friends of India (LFIN), a lobbying group associated with its namesake outfit, described the leaflets as “unfortunate” and demanded their immediate withdrawal.

​Facing community and online criticism, a Labour spokesperson told British tabloid the Daily Express that the party would “always bring the communities together”.

A Labour Party spokesman quoted by Dai has defended the leaflet and said the party would "always bring communities together".

"This leaflet makes it clear that a vote for anybody other than Kim (Leadbeater, the Labour candidate) would lead to a Tory MP who would support a Prime Minister who insults Muslim women and calls it a joke, refuses to deal with Islamophobia in his party and fails to speak out on human rights abuses in Kashmir”, the spokesperson was quoted as saying.