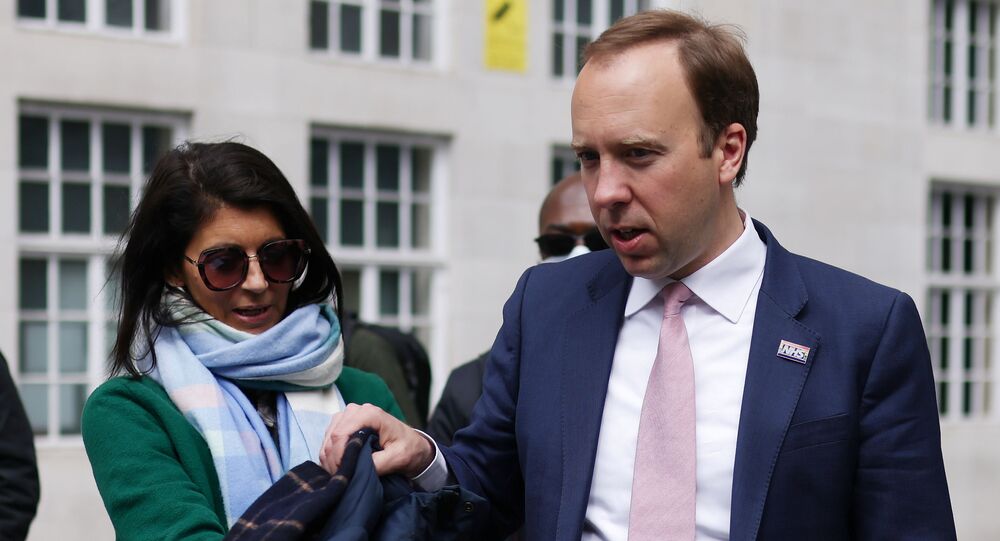 Hancock’s Resignation: Did Ex-UK Health Secretary and His Aide’s Affair Start in 2019?

Hancock announced his resignation on 26 June, a day after The Sun published a photo of him and his aide Gina Coladangelo kissing and embracing each other inside the UK Department of Health and Social Care.

Former British Health Secretary Matt Hancock’s aide Gina Coladangelo was “asked two years ago if they were having an affair”, The Sunday Times has quoted unnamed sources as saying.

The sources claimed that Coladangelo denied the existence of any romantic spark between her and Hancock when she was grilled on the matter by one of the ex-health secretary’s allies in the summer of 2019.

This reportedly came after the ally became suspicious of the two’s close ties as Coladangelo had been pictured with Hancock at public gatherings over the past several years. One such image allegedly dated back to the Conservative Party Conference in September 2019, the sources claimed.

The remarks came after an unnamed close friend of Hancock was cited as saying by The Daily Mail that “they [the former health secretary and his aide] are in love” and that “it is serious”.

The developments followed Hancock tendering his resignation on Saturday over reports of having an extramarital affair with Coladangelo.

In his letter to UK Prime Minister Boris Johnson, Hancock apologised to his family for what had transpired, stating that he needed to spend time with his children.

“I have been to see the prime minister to resign as secretary of state for health and social care. I understand the enormous sacrifices that everybody in this country has made, that you have made, and those of us who make these rules have got to stick by them and that's why I have got to resign”, Hancock said in a recorded statement that was posted on Twitter.

© AFP 2021 / TOLGA AKMEN
Netizens Celebrate Matt Hancock's Resignation
On Friday, The Sun reported that Hancock had been having a secret affair with his aide Gina Coladangelo, and to support its claim, the British tabloid published a photo of the couple kissing and embracing inside the Department of Health in early May, something that prompted both the opposition and members of the governing Conservative Party to call for his resignation.

Northern Ireland Minister Brandon Lewis has, meanwhile, reportedly said that the Department of Health will launch an internal investigation into how a recording of Hancock kissing his aide was released to the media.