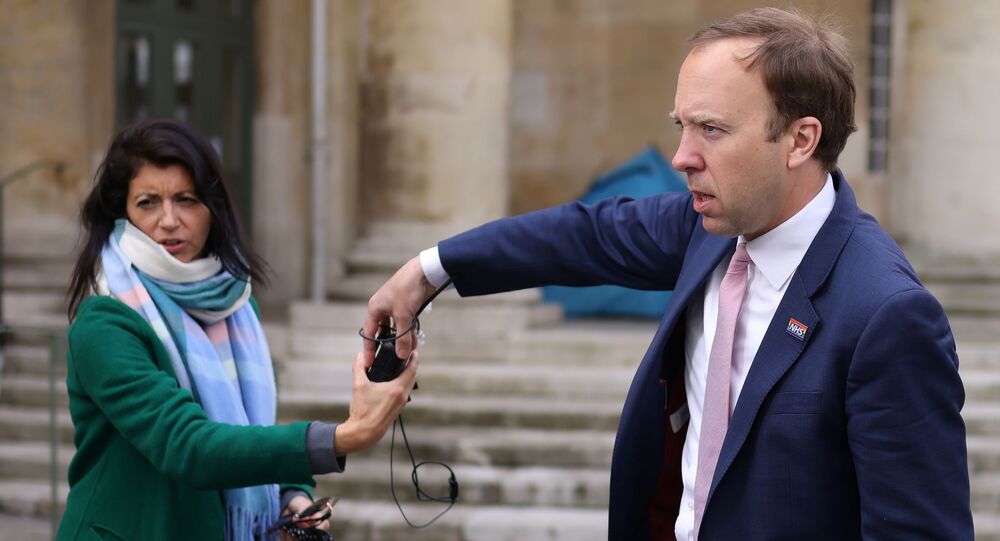 A British cabinet minister has said the Department of Health is probing how CCTV footage of the disgraced health secretary and his lover "got out of the system".

"I've seen some of the reports this morning outlining how different journalists think that the tape may have got out there," Northern Ireland Secretary Brandon Lewis told Sky News' Trevor Phillips on Sunday morning.

"That is certainly a matter I know the department of health will be looking into, to understand exactly how that was recorded and how it got out of the system," Lewis stressed. "It's something we need to get to the bottom of."

© CC BY-SA 2.0 / Howard Lake / Whitehall SW1 road sign
Concerns About Foreign State Spying on UK's Gov't Emerge After Video of Matt Hancock Kissing Aide
Hancock resigned on Saturday, apologising for breaking COVID-19 restrictions with the kiss — but not for cheating on his wife with a married woman or other allegations against him.

Prime Minister Boris Johnson's choice of replacement was announced within hours as former chancellor of the exchequer Sajid Javid.

Veteran journalist Andrew Neil told his new channel GB News it was a "lamentable state of affairs" that the footage was leaked.

​Hancock was the protégé of another former chancellor — and now editor of the London Evening Standard — George Osborne, serving as a special advisor to him at the treasury from 2005 and later as his chief of staff. There is little love lost between Osborne, a leading figure in the campaign against leaving the European Union, and Johnson, who won the 2019 election on the promise to "get Brexit done".

The Standard has become one of the government's fiercest critics under Osborne. Notably, the CCTV video was leaked exclusively to pro-Tory newspaper The Sun, rather than the Labour supporting Daily Mirror or liberal Guardian or Independent.