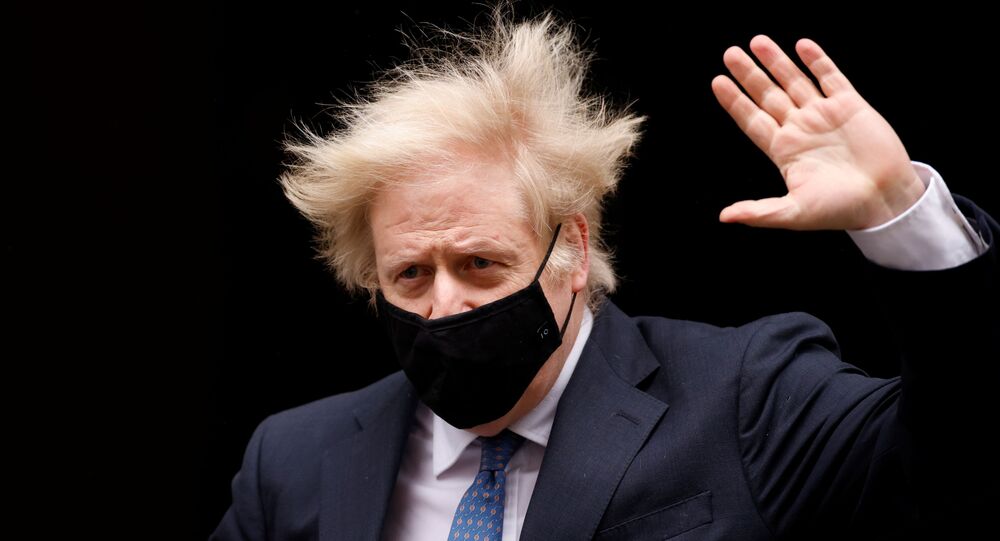 Life After No 10: BoJo Reportedly ‘Can’t Wait to Go Back to Writing, Have Fun, Make Money’

Boris Johnson's former top aide Dominic Cummings has been levelling fresh accusations about UK Health Secretary Matt Hancock and the Government's pandemic response in his new blogpost, while also suggesting Boris Johnson does not intend to serve a full term in Downing Street if he wins the next general election.

Boris Johnson reportedly has no intention to “go on and on” in power, and is already eyeing a post-No 10 future.

The phrase once used in 1987 by Margaret Thatcher, who served 11 years as UK Prime Minister, has been rehashed by Johnson’s former chief adviser, Dominic Cummings, in his explosive new blog post.

Among a series of allegations unveiled by him on Wednesday, the ex-Downing Street guru claimed:

“Unlike other PMs, this one has a clear plan to leave at the latest a couple of years after the next election, he wants to make money and have fun not ‘go on and on’. So we either live with chronic dysfunction for another ~5 years or some force intervenes.”

Responding to the post, the UK media has been speculating that Johnson could resign as early as 2025 or 2026.

While the next election must take place five years after the Conservative Party leader’s landslide victory in December 2019, when he won 43.6% of the popular vote vowing to "get Brexit done", some Tory MPs are cited by the Daily Mail as believing it could be held as early as 2023.

If that were the case, claim sources cited by the outlet, the Tories might be able to reap the benefits of the successful COVID-19 vaccine rollout while dodging the period of inevitable tax rises post-pandemic.

Furthermore, according to Cummings, who has been on a roll, launching broadsides targeting the PM and his cabinet's handling of the pandemic, the coronavirus public inquiry would not start for years. The former aide suggested the probe had been designed to “punt the tricky parts” after this PM has “gone”.

‘Go Back to Writing, Have Fun and Make Money’

Boris Johnson himself has reportedly shared thoughts on being Prime Minister, as well as plans beyond his Downing Street tenure, according to the publication.

A source cited by the outlet claimed that Johnson once said:

“This job is too much like hard work. It’s like pulling a giant 747 down the runway with a harness on your back. Every morning you get up and have to start pulling.”

Furthermore, it was purported that the former London Mayor once revealed he had no intention of “going on and on like Thatcher and Blair.”

“I want to get through this Parliament, win again and then head off soon afterwards. I can’t wait till I can go back to writing, have fun and make money,” the PM reportedly quipped.

Another source underscored how “fiercely protective” Johnson was of his reputation as a writer. The PM has penned half a dozen books and hundreds of newspaper columns over the years, including a life of Churchill, popular histories of London and the Roman empire, a memoir of his first general election campaign and a comic novel set in the House of Commons. Johnson would reportedly reject and rewrite speeches prepared for him by aides to protect his “brand”, if he found them to be not up to par.

“His first love is writing, not politics,” a source said, adding:

“He would say, “My future income depends on my writing and I cannot have it diluted by any old rubbish”.

‘Wild Horses Won’t Drag Him Out’

Claims made by Cummings, who was forced to resign as Johnson’s senior adviser last year after losing a Downing Street power tussle, have been met with scepticism by Tory MPs.

“Boris could easily win another landslide and if he does, wild horses won’t drag him out of No 10,” one MP was cited by the outlet as saying.

A Downing Street press secretary also dismissed the statements made by Cummings in his blog post, saying:

“The PM has actually been asked this before and has said himself it’s utter nonsense, so that still stands.”

Furthermore, claims that Johnson had likened being Prime Minister to “pulling a jumbo jet” and that he intended to leave office in four years to “make money and have fun” were branded as untrue.

The developments come as Dominic Cummings appeared before Parliament's health and social care and the science and technology select committees on 26 May to level serious allegations against Matt Hancock and Downing Street as a whole.

87/ A few simple Qs to ask the PM: pic.twitter.com/a7ZsW4wjRY

​According to Cummings, Hancock should have been fired for repeated errors and misjudgments, as well as "lying to everybody in multiple occasions in meeting after meeting in the cabinet room and publicly".

Hancock was accused of falsely claiming that all patients got the treatment they needed during the first peak of the pandemic and vowing that supply of personal protective equipment was under control in April 2020.

Cummings told MPs that this later turned out to be not true. Three weeks later he shared an apparent exchange between him and Johnson.

In the bombshell text messages the PM allegedly branded Matt Hancock’s performance on COVID-19 testing as “totally f***ing hopeless” and mulled giving some of his responsibilities to Michael Gove.

Meanwhile, Jeremy Hunt, chairman of the joint parliamentary inquiry that heard evidence from Cummings earlier this month, said the latter had failed to substantiate his claim that Hancock lied about testing patients who had been discharged into care homes from hospitals.

There was more melodrama than normal but it is not possible to stack up the most sensational revelations without evidence. Today's new @Dominic2306 tweets show the PM's total frustration ('f***ing useless' etc.) but do not prove anyone 'lied.'

A report in The Times says the committee does not plan to bring more witnesses to examine Cummings's claims against the Health Secretary.

Matt Hancock defended himself against the accusations lobbed by Cummings, as he drove to the Commons
When a journalists shouted: “Are you useless, Mr Hancock?” he responded: “I don't think so”.