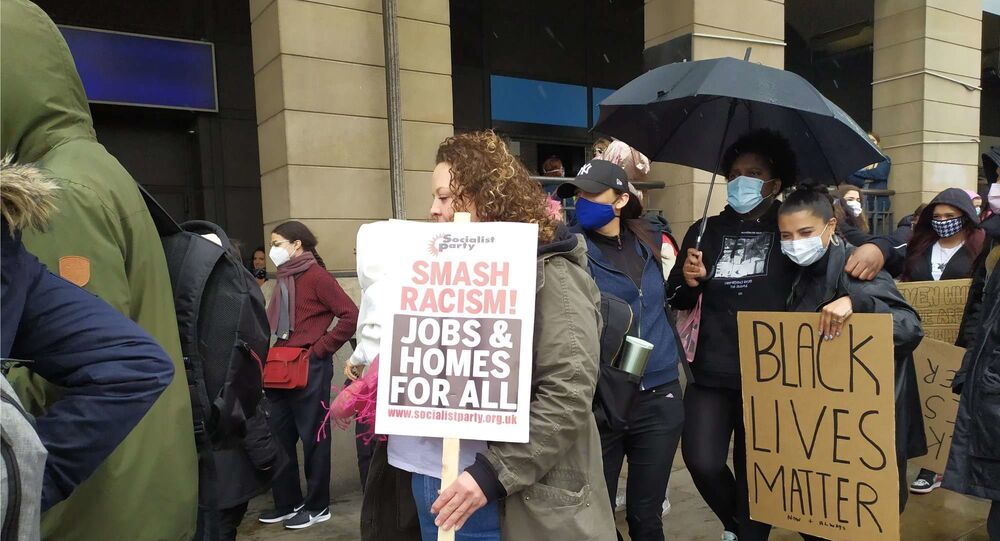 A government-ordered commission on race and ethnic disparities assembled a report on the state of race relations in the UK in late March, conceded that while “impediments and disparities do exist”, Britain could no longer be seen as having a system “deliberately rigged against ethnic minorities”.

Amid the Black Lives Matter protests that swept the UK in the wake of the death in police custody of African-American former convict George Floyd in the US city of Minneapolis last May, top officials at the UK’s trade department touted the message that BLM protesters had a point as they decried institutional racism.

The BLM demonstrations and purportedly disproportionate impact of the COVID-19 pandemic on minority communities “highlight how much more work there is still to do to achieve genuine equality”, wrote Antonia Romeo, at the time one of two top trade department civil servants, in a memo to staff dated 3 June 2020.

Staff were urged to join the Black, Asian and minority ethnic (BAME) Allies group by Romeo, who also hosted an open Black Lives Matter discussion at the Department for International Trade (DIT).

Her successor, John Alty, who took over in January, echoed the sentiments in a flurry of memos to staff that acknowledged “the role of ‘white silence’ in upholding institutional racism”.

Workers were called upon to “recognise our white privilege” and “listen when black people talk about racism and racial inequality”.

“People shouldn’t feel hesitant to speak about their experiences or fear potential backlash for discussing issues such as systemic racism and white privilege,” a senior trade official had written in a guest blog post distributed to DIT staff.

Furthermore, the soul-searching stance of the UK Trade department officials was supported by Lord Mark Sedwill, then head of the civil service who stepped down last October.

Sedwill bemoaned “persistent and painful inequalities" in British society that had apparently been laid bare by the BLM protests and the coronavirus pandemic, according to a memo dated 8 June 2020.

“Despite the efforts we have made within the Civil Service, this is an area where we still fall short of our aspirations,” Sedwill wrote.

However, the surfaced messages from top officials seem to be inconsistent with the position espoused by Trade Secretary Liz Truss and the administration of Prime Minister Boris Johnson.

Truss delivered a speech in December titled The New Fight For Fairness last December, saying that the equality debate has been dominated “by those who believe people are defined by their protected characteristic, and not by their individual character”.

Subsequently, a government-commissioned report was published in late March that discovered:

“Put simply we no longer see a Britain where the system is deliberately rigged against ethnic minorities… The impediments and disparities do exist, they are varied, and ironically very few of them are directly to do with racism. Too often ‘racism’ is the catch-all explanation, and can be simply implicitly accepted rather than explicitly examined.”

This in one of the worst bits of the #SewellReport so far:

Putting a positive spin on slavery and empire. Published on a Government website in 2021.

Is this for real? pic.twitter.com/pxRg5KtHcW

Simon Woolley, founder of NGO Operation Black Vote, voiced concern over what he saw as a deliberate shutting down of the debate by the government.

“It is both disappointing and more than a little heartbreaking when very senior politicians characterise this as identity politics and loud lobby groups,” he said.

In collaboration with @EVENSurvey we are launching a first of its kind survey to document the impact of Covid-19, and the lockdowns, on the lives of people from ethnic and religious minority groups. 👇🏿

Opinions on the matter have split in parliament. Conservative MP John Hayes, who chairs the Common Sense Group, branded civil servants backing the Black Lives Matter message as “drawn from unfortunately an out of touch, narrow-minded, bourgeois left elite that has held too much power in Britain for too long”.

In a comment on the report, a spokesperson for the trade department was cited as saying:

“The Civil Service is committed to promoting and ensuring equality and valuing diversity.”