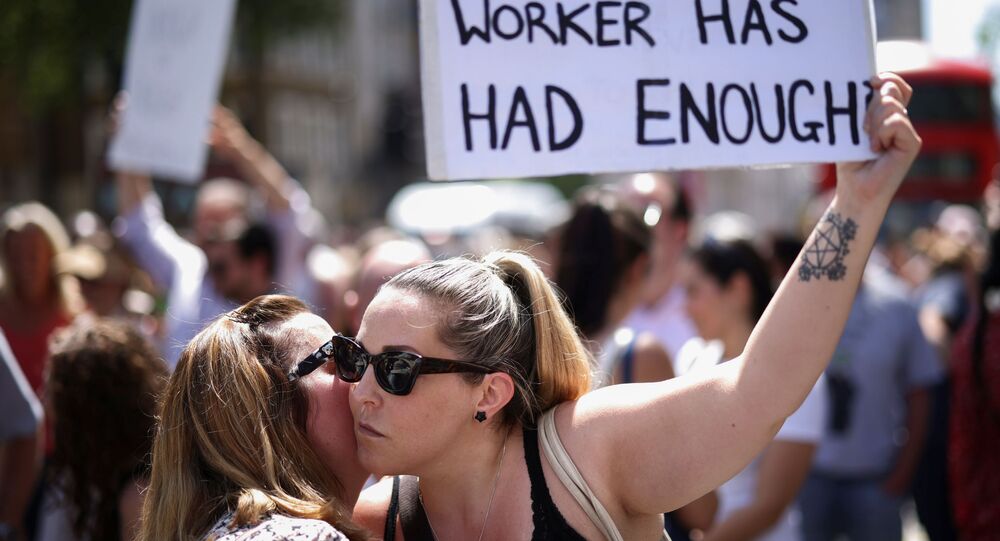 Reclaim UK party leader Laurence Fox urged protesters to block the roads and vowed to "shut down" London, while the Night Time Industries Association warned that some clubs were considering opening on 21 June in defiance of the lockdown extension.

Anti-lockdown protesters have swarmed Downing Street following reports the end of lockdown will be delayed by four weeks.

Hundreds of demonstrators descended on Westminster in the blazing sun on Monday amid reports Prime Minister Boris Johnson would announce that the 21 June "Freedom Day" would be postponed in the face of concerns over the spread of the Delta variant of coronavirus.

Nightclub owners threatened to re-open on 21 June in protest at the government decision that would mean more lost revenue after 15 months of on-off lockdown measures.

Protesters chanted "shame on you" outside Downing Street on Monday afternoon in anger at the cabinet's reported decision.

​Actor and Reclaim UK party leader Laurence Fox posted an expletive-laden video from the protest, vowing to "shut this city down".

​Protesters tweeted their photos and urged the media to cover the event.

Night Time Industries Association (NTIA) CEO Michael Kill said that his sector was mulling “every avenue” for fighting the decision, including legal challenges, and that some clubs were even thinking of opening on 21 June in defiance of the emergency laws.

Nightclubs are “getting to breaking point”, Kill told City A.M., adding that the mooted postponement was causing “panic and anxiety" in the trade.

Henry Nicholls
Boris Johnson to Delay England’s Reopening for at Least Two Weeks to Stem Delta Variant Spread, Media Says
An NTIA statement said one in four venues was staring bankruptcy in the face after 15 months of enforced closures.

“Night time economy businesses have waited patiently for their opportunity to open for over 15 months, many have not survived, some are on a financial cliff edge, hundreds of thousands of jobs have been lost, a huge pool of talent has been swept away and others have been left to suffer extreme financial hardship”, Kill said.

“Any delay will drive confidence in the sector to a new low, culminating in workforce leaving the sector, and customers who are starved of social engagement, attending illegal unregulated events in place of businesses that are well operated, licensed and regulated”.

Famed West End musical composer Andrew Lloyd-Webber has already vowed to reopen his theatres without social distancing rules on 21 June, with or without official permission.