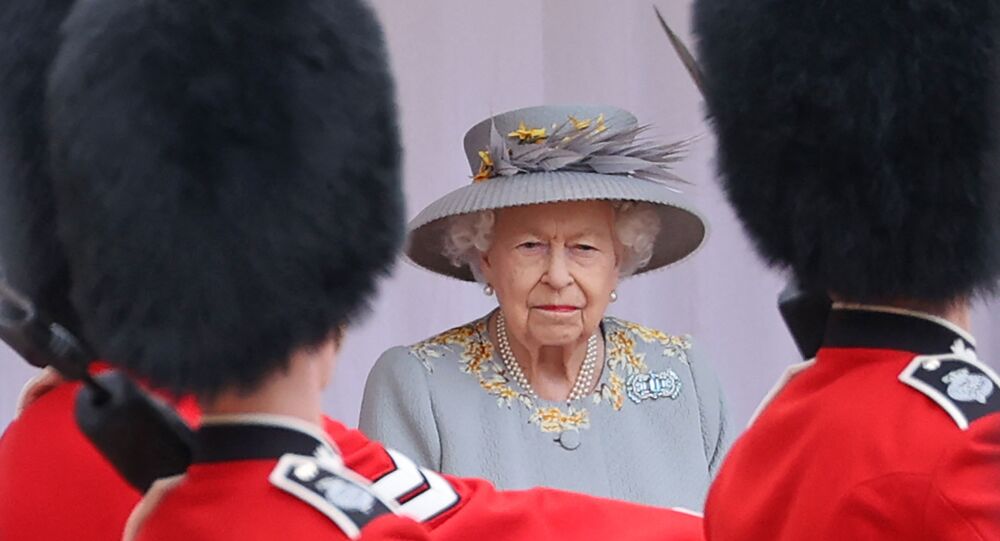 During the bombshell interview with Oprah Winfrey, the Duchess of Sussex, Meghan Markle, said she could not be expected to remain silent about her experiences of palace life if the Royal Family was "perpetuating falsehoods" about her and Prince Harry.

Stepping back from the "never complain, never explain" policy, Queen Elizabeth II has decided she will no longer remain tight-lipped when any statements that misrepresent her private conversations or those of other senior royals are made public, The Mail on Sunday has revealed.

Her Majesty has reportedly instructed courtiers to fix any misleading statements so that she won't stay silent if Prince Harry and Meghan Markle allow "mistruths" about the Royal Family to circulate.

© REUTERS / Phil Noble
‘No Georgina Floydina?’ UK Journalist Off Twitter After Mocking Harry & Meghan Newborn’s Name
According to the publication, the decision "demonstrates the Queen's exasperation at the relentless briefings" that allies of Prince Harry and Duchess of Sussex Meghan have been giving to the media.

The Queen was allegedly sent "over the edge" after a controversy erupted over the choice of name of the couple's newborn daughter, Lilibet Diana.

Some outlets reported that Meghan and Harry had asked "permission" to name their baby girl Lilibet, a much cherished childhood nickname of the Queen that was used by close family and her beloved late husband Prince Philip. Others, including the BBC, claimed, citing royal insiders, that the couple hadn't consulted with the monarch, but simply informed Her Majesty of their choice.

These allegations infuriated Harry and Meghan, whose relationship with the rest of the Royal Family remains tense and fragile, with the Sussexes threatening legal action against the BBC, as they slammed the network's report as "false and defamatory".

"The Duke spoke with his family in advance of the announcement. In fact, his grandmother was the first family member he called. During that conversation, he shared their hope of naming Lilibet in her honour. Had she not been supportive, they would not have used the name", a spokesman for the couple said.

It was also reported in the US media that Harry had introduced Lilibet to her great grandmother in a video call, but an insider told The Mail on Sunday that "no video call has taken place".

"Friends of the Sussexes appear to have given misleading briefings to journalists about what the Queen had said and that took the whole thing over the edge. The Palace couldn't deny the story that this was a mistruth", the source said.

The insider also explained that the Queen's response to the barrage of conflicting media reports will go beyond the Lilibet row.

"This is about whether or not what is being reported is an accurate version of what actually happened".

Lilibet "Lili" Diana Mountbatten-Windsor was born on 4 June, with her name being chosen as a tribute to Harry's late mother, Princess Diana, and his grandmother Queen Elizabeth II. Meghan and Harry said the baby girl was "more than we could have ever imagined", while Her Majesty and the Royal Family were left "delighted" at the news of her arrival.

© AP Photo / Phil Nobel/Pool
Prince Edward Says It's 'Safest to Stay Out' of Meghan & Harry Row With Royal Family
Harry and Meghan announced their decision to step down from their senior royal posts in January 2020 and soon settled down in North America with their son Archie. Since then the couple has been dropping "truth bombs" about their life in the Royal Family.

During an explosive sit-down with Oprah Winfrey in March 2021, Meghan accused Buckingham Palace of "perpetuating falsehoods" about her and Prince Harry, vowing that they would not be silent in telling their side of the story.

The Duchess of Sussex also said she was having suicidal thoughts during her first pregnancy but was purportedly refused help by people working for the "institution". She also alleged that the Royal Family failed to protect her from damaging press reports. Meghan specifically pointed to much sensationalised tabloid reports that she had made her sister-in-law Kate Middleton cry before her wedding, claiming the reverse happened. She, however, clarified it was not a "confrontation" and the Duchess of Cambridge had apologised.

Harry, in turn, also added that none of his relatives spoke out in support of Meghan following the racism she faced in the media.

"No one from my family ever said anything over those three years. That hurts", the Duke told Oprah.