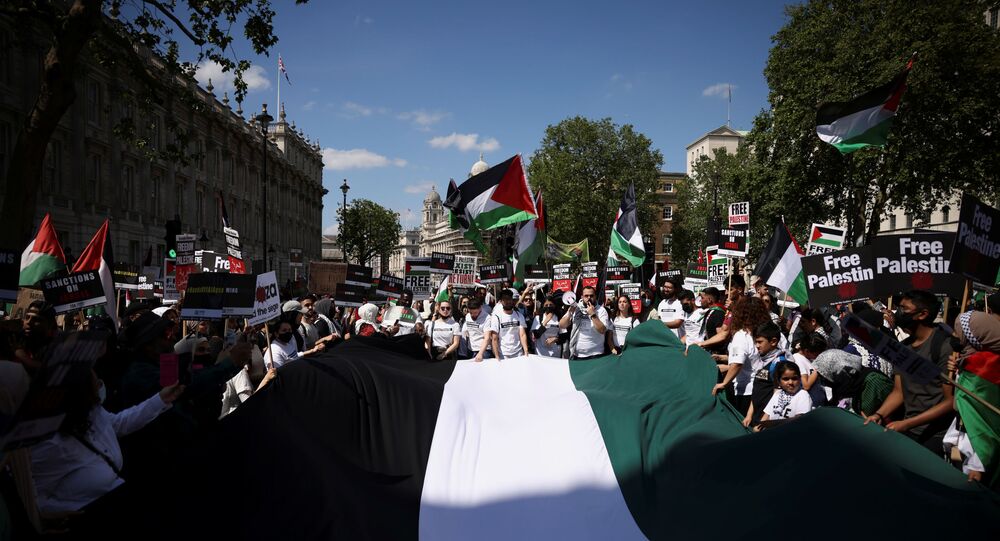 A wave of pro-Palestinian marches has been taking place in the United Kingdom, as well as the United States, in the wake of the recent escalation in the Gaza Strip between Hamas and the IDF. Participants have called on governments to stop arming Israel in the decades-long conflict.

The former leader of the UK Labour Party and now MP for Islington North, Jeremy Corbin, joined the "Justice For Palestine" demonstration organized by the Palestine Solidarity Campaign (PSC), to end "British complicity in Israel's war crimes" outside Downing St. in London on Saturday.

Corbin shared his own speech at the rally via Twitter, calling on the UK government to cease arms sales to Israel, saying that British weapons are "killing children abroad".

At today’s Justice For Palestine demonstration in London, I also called for a halt to arms sales. UK-made weapons are killing civilians - including children - in conflicts abroad. This must stop. pic.twitter.com/Sf2tEGjtkX

​Demonstrators were seen waving Palestinian and Turkish flags and holding banners that read "Free Palestine" and urging the British government to impose sanctions on Israel. Another sign read, "Peace to a land that was created for peace but never saw a peaceful day".

I loved chanting for Palestine and freedom in Arabic in London today. An impressive turnout, and absolutely incredible energy. pic.twitter.com/XS8scrstIv

The rally also comes as the leaders of the world's biggest economies arrive in Cornwall for the G7 summit.

Earlier this week, members of the UK's Palestine Action movement took over a Canadian-owned aerospace factory in the English county of Cheshire, which manufactures military technology for Israeli arms company Elbit’s Systems, a member of the group behind the protest told Sputnik.

Palestine Action has been targeting Elbit’s factories in the UK for the last nine months to demand their closure, claiming that the parts and weaponry they produce are being tested and used against the Palestinian people in Gaza and other occupied territories.

Recent video footage posted on social media showed several activists on the roof of the building located in the industrial town of Runcorn, while others who broke into the factory have destroyed property including floodlights, ventilators, windows and cameras, and sprayed blood-red paint across the premises.

Palestine Action group sprayed JLL office in London with red after they "ignored requests to end their profiteering from Israel’s lethal arms trade."

"We'll never ignore the plight of the Palestinian people...who suffer as a result of weapons built on our doorsteps," Pal. Action pic.twitter.com/NQgHnDBZjk

The recent 11-day escalation in Gaza resulted in the deaths of 12 Israelis and 270 Palestinians, including 64 children. The Egypt-brokered ceasefire ended the hostilities, but the humanitarian situation in the Gaza Strip has seriously deteriorated, demanding significant financial resources to restore.