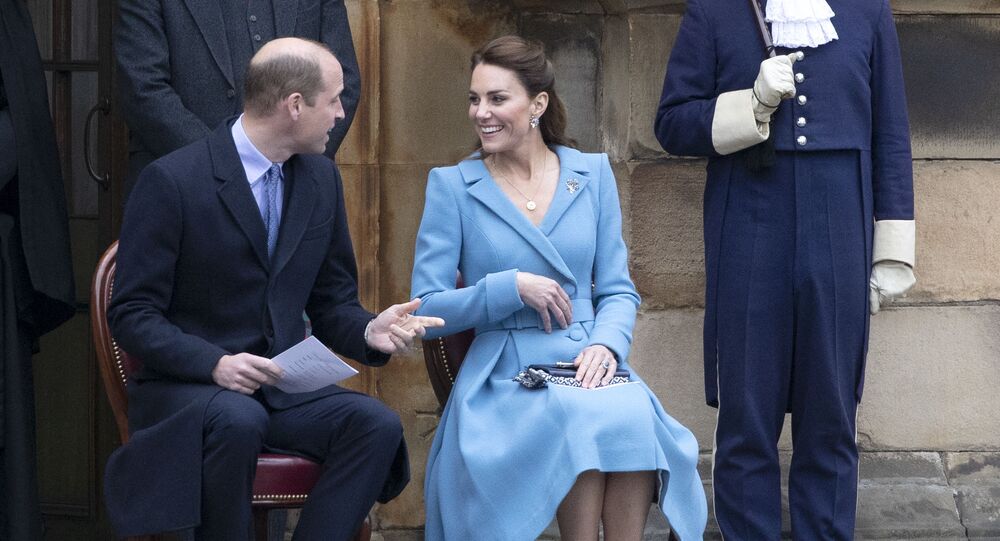 Prince William, Kate May be Tapped to 'Save the Union' as Royals Fear Politicians 'Losing Scotland'

Late last month saw the Duke and Duchess of Cambridge's tour of Scotland, during which Prince William underscored that the country was "so important" to himself and his wife.

Officials at Buckingham Palace are considering asking Prince William and Kate Middleton to spend more time in Scotland to strengthen the Union, The Sunday Times has cited unnamed royals sources as saying.

According to the insiders, palace aides hope that the Duke and Duchess of Cambridge will become "a visible symbol of the bonds between England and Scotland".

"They think of it as their Union. It was originally a union of crowns. They think the politicians have been losing Scotland for them. What William is doing is a deliberately more muscular approach to the crown investing in the relationship with Scotland", one of the sources claimed.

Referring to Balmoral Castle, the Scottish holiday home of the Royal Family, the insider added that "advisers want William and Kate to be in Balmoral a lot more and build on their St Andrews connection".

"They [the advisers] want them [William and Kate] not to look like visitors but to look like residents. This is likely to mean that William is not seen wearing a kilt. The feeling is that successive governments have let this drift and that the politicians are irreparably divided", the source argued.

Duke and Duchess of Cambridge's Tour of Scotland

The remarks followed the couple's recent visit to Scotland, during which Prince William underscored the country's great importance to himself and his spouse. He touched upon some of his best days in Scotland, where he met Kate, and his worst moments there as he was staying at Balmoral in 1997, when his mother, Princess Diana, died.

© AFP 2021 / JANE BARLOW
Britain's Prince William, Duke of Cambridge and Britain's Catherine, Duchess of Cambridge attend a Beating Retreat by The Massed Pipes and Drums of the Combined Cadet Force in Scotland at the Palace of Holyroodhouse in Edinburgh, Scotland on May 27, 2021, the final day of their week-long visit to the country

On the final day of their tour, William and Kate sat down with former UK Prime Minister Gordon Brown and his wife Sarah at the Queen's official Edinburgh residence, a meeting that came after Brown launched a renewed campaign to save the Union.

The developments unfold against the backdrop of Scotland's First Minister Nicola Sturgeon's increasing drive to hold a second independence referendum, something that further intensified after the Scottish National Party's landslide victory in the Holyrood election in May.

© AFP 2021 / JANE BARLOW
Britain's Prince William, Duke of Cambridge and Britain's Catherine, Duchess of Cambridge attend a Beating Retreat by The Massed Pipes and Drums of the Combined Cadet Force in Scotland at the Palace of Holyroodhouse in Edinburgh, Scotland on May 27, 2021, the final day of their week-long visit to the country

UK Prime Minister Boris Johnson, for his part, insists that the focus should be placed on recovering from the coronavirus pandemic rather than dealing with another independence referendum.

© AP Photo / CHRIS CLARK
PM Johnson Says 'Endless Talk' About Scotland’s Referendum Now Irrelevant to Most People
Last year, he stressed in a letter to Sturgeon that "the Scottish people voted decisively to keep our United Kingdom together, a result which both the Scottish and UK governments committed to respect".

Scotland already held one independence plebiscite back in September 2014, in which 55 percent of voters expressed their desire to remain in the UK.

However, new calls for an independence referendum сame after the UK voted to leave the EU in 2016. At the time, Scotland opposed Britain's withdrawal, with 62 percent of Scots voting to stay in the bloc.