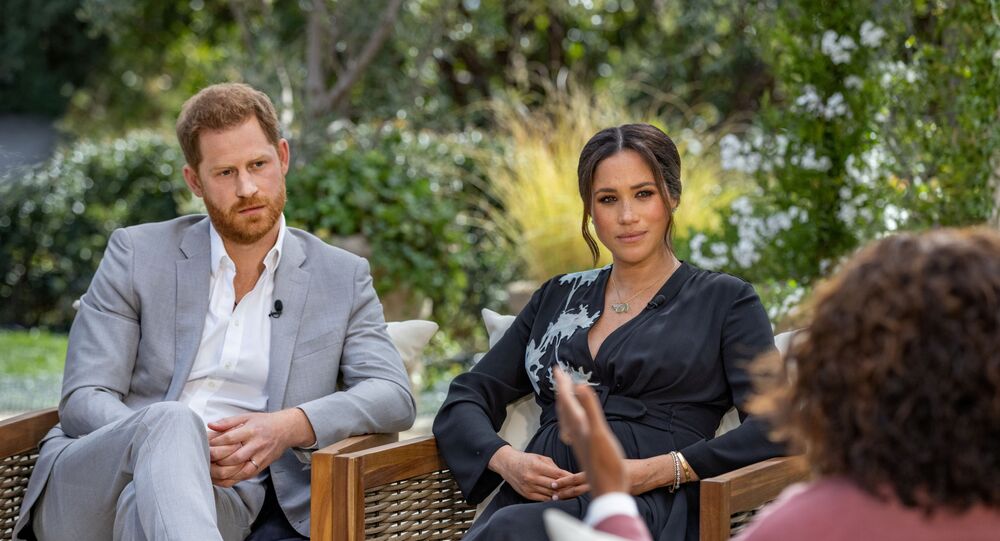 The Duke and Duchess of Sussex sat down for an explosive tell-all with Oprah Winfrey back in March, making a spate of allegations against the royals. The couple claimed that there was a discussion about the colour of their firstborn's skin within the family and a total neglect of Meghan's mental health amid attacks from the British press.

Prince Edward and his spouse, Sophie, couldn't help but joke about Harry and Meghan's bombshell interview with American talk show host Oprah Winfrey as they spoke to The Telegraph.

The Earl and Countess of Wessex were asked whether they'd seen the scandalous tell-all, to which Prince Edward replied "Oprah who?" while Sophie jokingly wondered "Yes, what interview?"

The Countess of Wessex, however, eventually took on a more serious tone, stressing that the royals are "still a family no matter what happens, we will always be".

The couple revealed that Prince Harry had a "lengthy chat" with them when he was in the UK to attend the funeral of his grandfather Prince Philip in mid-April.

© AP Photo / Kirsty Wigglesworth
‘Privacy Doesn’t Mean Silence’: Oprah Defends Prince Harry, Meghan Amid Privacy Criticisms
It was the first time the Duke of Sussex had been in Britain since stepping down as a senior working royal together with his wife, Meghan, to live a more independent life in North America.

His visit to the UK came just weeks after the explosive interview with Oprah Winfrey, during which the Sussexes alleged that the royal family had concerns about the skin colour of their son Archie, and accused “The Firm” of failing to provide psychological support to the pregnant Meghan when she was suicidal after being "harassed" by UK tabloids.

When Oprah asked Meghan to name the individual who raised the issue of Archie's skin tone, the duchess declined, saying, "that would be very damaging to them". Harry also refused to identify the royal.

"That conversation, I am never going to share. At the time, it was awkward, I was a bit shocked", Harry told Winfrey, at the same time stressing that the individual in question was neither Queen Elizabeth nor Prince Philip.

During the two-hour chat, Harry also said that his father, Prince Charles, had at one point stopped taking his calls, and alleged that he had been "trapped" in the system "like the rest of my family".

At the time, Buckingham Palace issued a statement, saying the royal family would be privately addressing the shocking racial issues that were recently revealed to the public by both Prince Harry and Meghan.

"The whole family is saddened to learn the full extent of how challenging the last few years have been for Harry and Meghan. The issues raised, particularly that of race, are concerning. Whilst some recollections may vary, they are taken very seriously and will be addressed by the family privately", the statement said.