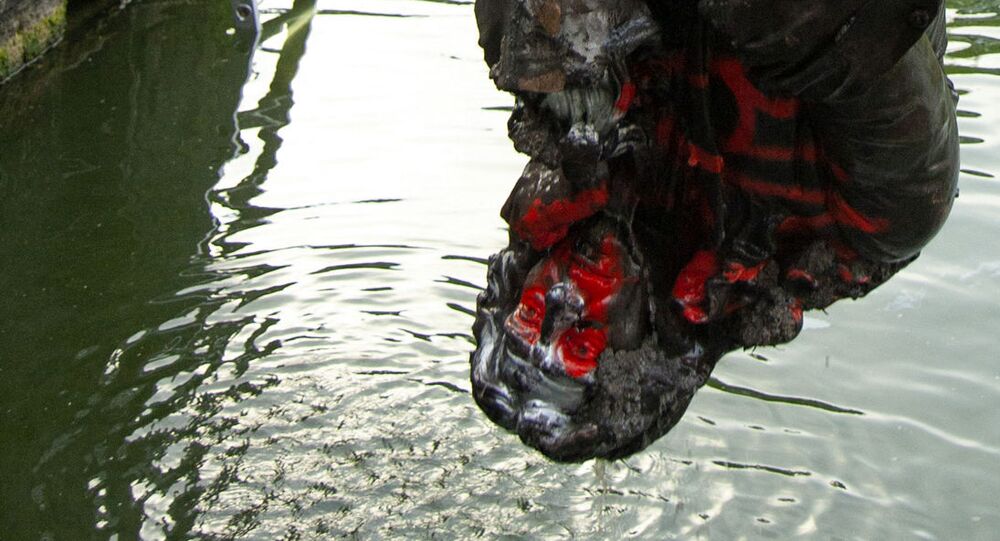 The statue has had to be exhibited on its side as it can no longer stand upright after the damage it sustained during a Black Lives Matter protest almost exactly a year ago.

A statue of slave trader Edward Colston has been exhibited at the M Shed Museum in the Bristol docklands almost a year after it was brought down by irate Black Lives Matter protesters on 7 June 2020.

The statue, still stained with red and blue graffiti, has been placed horizontally upon a wooden stand. The museum also displayed placards from the protest next to the statue.

The We Are Bristol History Commission has put the statue back on display to let the public decide its ultimate fate.

"The display is not a comprehensive exhibition about Colston or transatlantic slavery in Bristol, but it is intended to be a departure point for continuing conversations about our shared history," the chairman of the commission, Professor Tim Cole, was quoted by the BBC as saying.

© Photo : YouTube/ SWNS
'Everyone Happy': Banksy Offers Creative Solution to Colston Statue Toppling
​Colston's bronze likeness was torn down by Black Lives Matter protesters in Bristol at the height of the global anti-racism movement last year, sparked by the killing of the African-American George Floyd.

Protesters dragged the statue through the city before throwing it into Bristol Harbour from Pero's Bridge. The city authorities retrieved it from the bottom of the harbour four days later. It was subsequently stored for cleaning and preservation.

Edward Colston was a Bristolian merchant and a Tory lawmaker, who lived in the late 17th and early 18th centuries and was involved in the transatlantic slave trade.