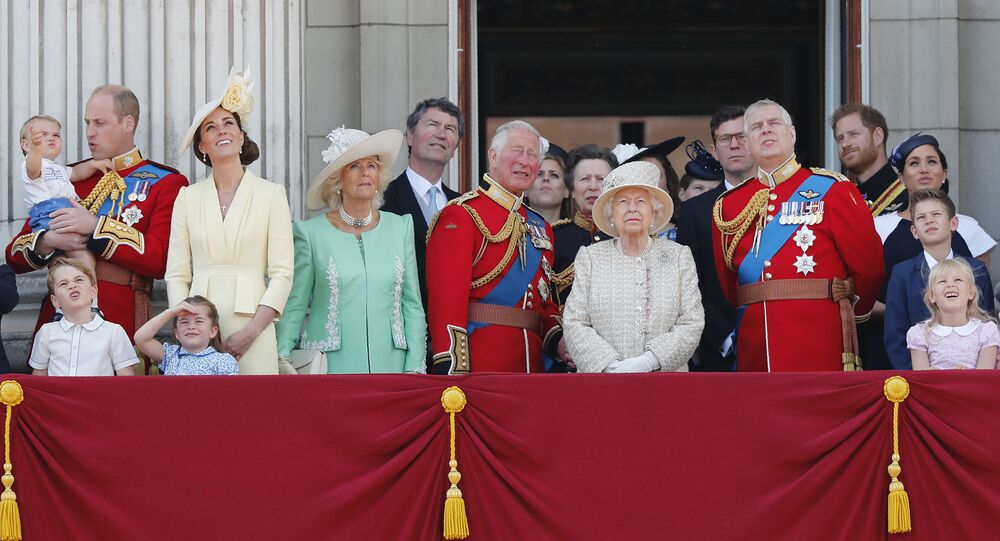 The news is likely to add pressure to the UK Royal Family, who has in recent months faced accusations of racism following a tell-all interview Prince Harry and Meghan Markle gave to US talk show host Oprah Winfrey. The Sussexes claimed that one royal was concerned about the potentially dark skin of their firstborn child, Archie.

The Queen's courtiers banned "coloured immigrants or foreigners" from working in clerical roles in the Palace until at least the 1960s, The Guardian has reported citing documents it obtained. There is no information on when the ban ended. The newspaper writes that Buckingham Palace has refused to answer questions on the issue.

However, it said that its records show people from different ethnic backgrounds working in the royal household in the 1990s.
The outlet says it came into possession of the documents during an investigation into the use of a secret parliamentary mechanism called the Queen's Consent by the Royal Family. It allows the Queen to secretly influence the laws adopted by the government and was used to draft the law on race relations back in the 1960s, The Guardian writes.

According to the newspaper, back then British authorities wanted to introduce new legislation on race relations in the United Kingdom that would make it illegal for individuals and companies to refuse to employ people citing their ethnicity or race.

A Home Office civil servant, TG Weiler, held negotiations with Lord Tryon, who was responsible for managing the Queen's finances. According to the documents, Lord Tryon said Buckingham Palace was ready to comply with the newly-proposed legislation if it enjoyed similar exemptions to those provided to the diplomatic service. The exemption in question allowed job applicants, who had lived in the United Kingdom for less than five years, to be rejected.

The civil servant wrote that the Royal Family was particularly concerned that if the proposed legislation applied to the Queen's household it "would for for the first time make it legally possible to criticise the household. Many people do so already, but this has to be accepted and is on a different footing from a statutory provision".

Untouchable Monarch and Allegations of Racism

The Queen and her household were exempted from the law that prohibited racial discrimination, The Guardian reports. The Palace's exemption from the law meant that the Race Relations Board, which investigates incidents of discrimination would sent any potential complaints filed by the Queen's staff to the home secretary rather than UK courts. In addition, the Palace was exempted from laws aimed at countering sexual discrimination. The said laws remain in place to this day.

The news will likely add pressure to the UK Royal Family, which has previously faced accusations of not employing members of ethnic minorities. This year, the Firm – the nickname for senior members of the Royal Family and their staff – has been accused of racism after Meghan Markle, the first mixed-race royal, claimed that one member of the family was concerned about the potentially dark skin of her firstborn child, Archie.

"Because they were concerned that if he were too brown, that would be a problem? Are you saying that?", asked TV host Oprah Winfrey.

"If that's the assumption you are making, I think that feels like a pretty safe one", Meghan Markle replied.

The Royal Family faced a barrage of criticism following the interview. Former First Lady Michelle Obama said she was not surprised by Meghan Markle's claim.

Buckingham Palace subsequently issued a statement, saying it would privately address the shocking allegation of racism. Later, Prince William said the family was "very much not" racist.