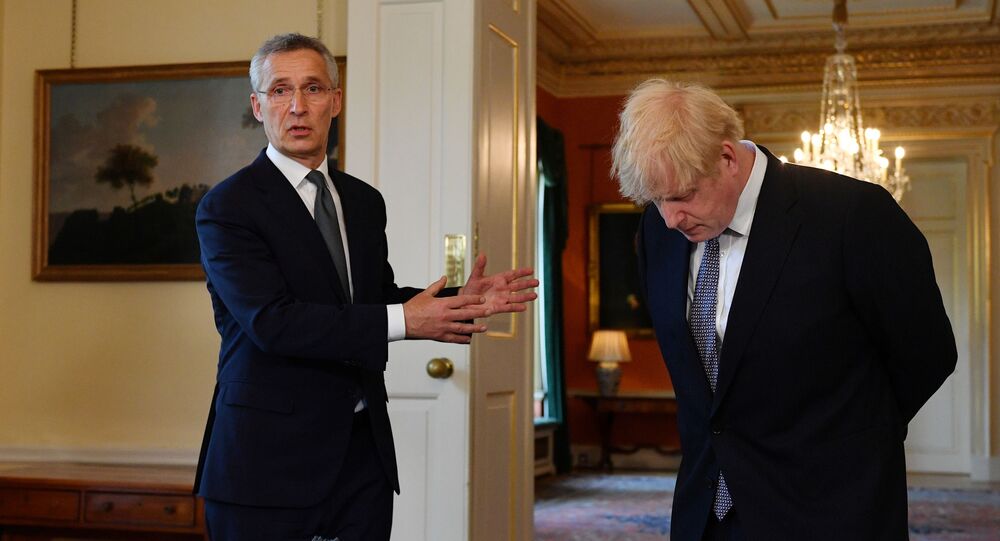 'Standing Together Against Threat From East': UK Backs NATO 2030 Agenda

NATO chief Jens Stoltenberg has joined UK Prime Minister Boris Johnson at a press conference where they addressed the alliance’s future plans for Russia, Belarus, and other countries.

While stating that addressing challenges from Afghanistan, Belarus, Russia, and China is on NATO 2030's agenda, the UK has reinforced its "unwavering support" for the alliance ahead of its upcoming summit in Brussels.

During a joint press conference with NATO head Jens Stoltenberg in London on Wednesday, PM Boris Johnson was asked how the UK will deal with Russia without provoking Moscow.

BoJo said that London seeks to protect itself from cyberthreats and “all kinds of intimidation” felt by NATO members on the eastern borders. He then mentioned the “outrageous Belarus hijacking,” and said that NATO members will stand together in protest.

He reiterated that “standing together against threat from east” is part of NATO 2030's vision.

Commenting on the forced landing of the Ryanair flight in Minsk, Stoltenberg said member states plan to take further action against the Eastern European country.

"I think the most important thing now is to make sure that those sanctions that are agreed are fully implemented. And I also know that other allies are looking to whether they can step up further," he said.

On 23 May, a Ryanair plane flying from Athens to Vilnius was forced into an emergency landing in Minsk following a bomb threat, which later turned out to be fake. Opposition blogger Roman Protasevich, who was among passengers, was detained during the stopover in the Belarusian capital.

The UK has since summoned the Belarusian ambassador in London to complain about the incident. UK Foreign Secretary Dominic Raab said on Monday that Britain is “actively considering and coordinating with our allies on further sanctions on those responsible for this outlandish conduct.”

​Raab joined the teleconference of NATO foreign and defence ministers on Tuesday to discuss plans for NATO 2030.

“In a more competitive and unpredictable world, we need transatlantic unity; Europe and North America standing strong together in NATO; so the goal of our NATO 2030 initiative is to prepare our Alliance for the future,” Stoltenberg said during the conference.

Protasevich, the founder of Telegram's "Nexta" channel – considered extremist by the Belarusian authorities – now faces up to 15 years in prison.

Commenting on the incident, the Kremlin spokesman said last week that the incident needed a thorough investigation rather than "emotionally-charged" conclusions and actions.