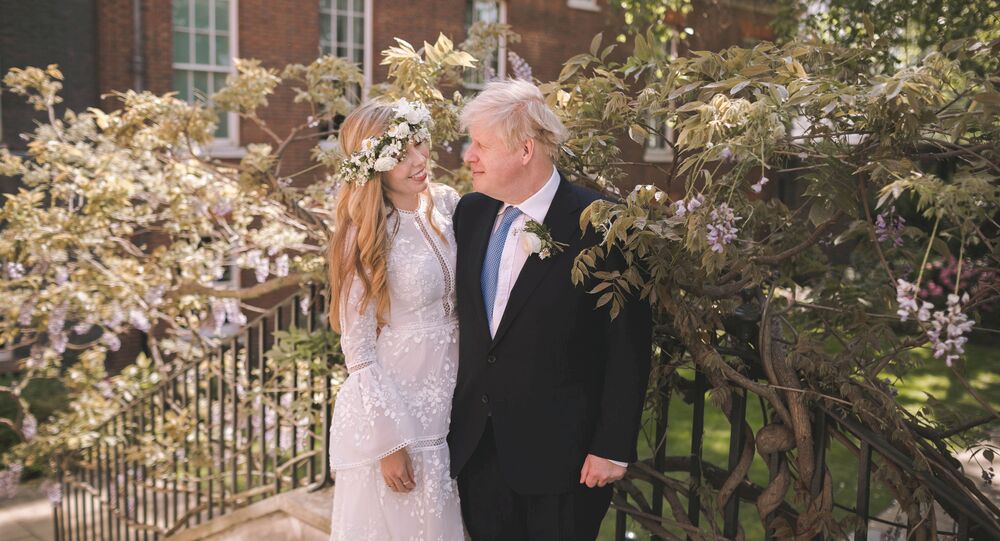 Secret Johnson Wedding Hailed a ‘Triumph’ Over Enemies, as Newlyweds Delay Honeymoon For a Year

UK Prime Minister Boris Johnson tied the knot with his long-time partner and the mother of his one-year-old son, Carrie Symonds, in a secret ceremony at Westminster Cathedral on Saturday that only a select few were privy to.

Newly married couple Boris Johnson and Carrie Symonds have reportedly decided to delay their honeymoon 'by a year' to allow the UK Prime Minister to get back to tackling the daily challenges of the ongoing coronavirus pandemic, according to The Telegraph.

“The couple will celebrate their wedding with family and friends next summer,” a Downing Street spokesman was cited as saying.

It is understood the newlyweds intend to go on a honeymoon at the same time.

The secret, much-anticipated nuptials took place on Saturday at Westminster Cathedral, with no Tory MPs or cabinet ministers believed to have made it onto the hand-picked guest list – a fact that ostensibly left some in the Party ranks somewhat miffed.

Many Congratulations to Mr & Mrs Johnson @BorisJohnson and @CarrieSymonds

Wishing you both much love and happiness. pic.twitter.com/pb99fuO9W5

​The date for the couple's hippie-vibe wedding had apparently been marked in the diary for months, with all chosen attendees sworn to secrecy.

The guest list had been capped in conformity to the country’s COVID-19 lockdown rules, which currently allow no more than 30 people to attend weddings.

The £2,870 wedding dress by designer Christos Costarellos had been hired by Symonds for just £45 from MyWardrobeHQ, as “something borrowed” for the nuptials. Boris Johnson, 56, who was taking his third walk down the aisle, wore a white shirt tucked into navy trousers and a Tory blue tie.

Johnson’s brother Leo, co-presenter of Radio 4 series Future Proofing, was his best man at the ceremony, conducted by Father Daniel Humphreys, with his other siblings also in attendance.
None of Boris Johnson's four grown-up children from his second marriage to Marina Wheeler are said to have turned up to witness their father re-marry.
As to why twice-divorced Johnson was able to remarry in a Catholic church, the Diocese of Westminster confirmed that, as someone baptised in the faith, the PM’s previous marriages were not considered valid because they were not Catholic ceremonies.

According to reports, guests described Symonds as looking “extremely happy”, while Johnson looked “very smart and dapper....he didn't take his eyes of her”.

After the ceremony, guests are reported to have partied in the Downing Street garden, decked out for the occasion in folky style, with a lavish afternoon tea and a singalong around a pit fire with a folk-band called The Bow Fiddlies providing the tunes.

The couple’s mothers were present for the party at Downing Street, while Carrie Symond’s father Matthew Symonds was conspicuously absent, with no information as to whether he was invited.

The couple were expected to spend a “mini-moon” for the rest of the Bank Holiday weekend at Chequers, the Prime Minister's country retreat in Buckinghamshire.

Carrie Symonds, who has taken her husband’s surname, shared a photo of the couple on Instagram, taken by photographer Rebecca Fulton, adding she was “very, very happy” and thanking her followers for their “very kind” wishes.

Friends of the bride have applauded the nuptials as a “triumph” over adversaries, in a nod at former Downing Street aide Dominic Cummings, fired in November 2020, and his recent bombshell barrage of grievances.

The disgruntled political strategist had been torching the Prime Minister and many of his ministers during a parliamentary session on Wednesday over the government’s alleged “mishandling” of the COVID-19 crisis.

Speaking at an evidence session, Cummings insisted that if Johnson had not been distracted by his “crackers” fiancée, Carrie Symonds, he might have been quicker in mobilising his coronavirus response.

The PM’s former chief advisor, who had reportedly clashed with Symonds during their shared stint in Downing Street, last week accused her of allegedly “completely unethical and clearly illegal” moves to land her friends jobs at No10, while seeking to oust him.

“I've got huge admiration for Carrie… She's been living through a horrendous time - she's had to put up with accusations and smears, and she has come through it all with such dignity. It's a triumph for the way she's handled it,” a friend was cited by The Times as saying.

Boris Johnson is the first premier to marry in office in 199 years. The couple announced their engagement, as well as the news that they were expecting their first child,last February, with Wilfred was born two months later.