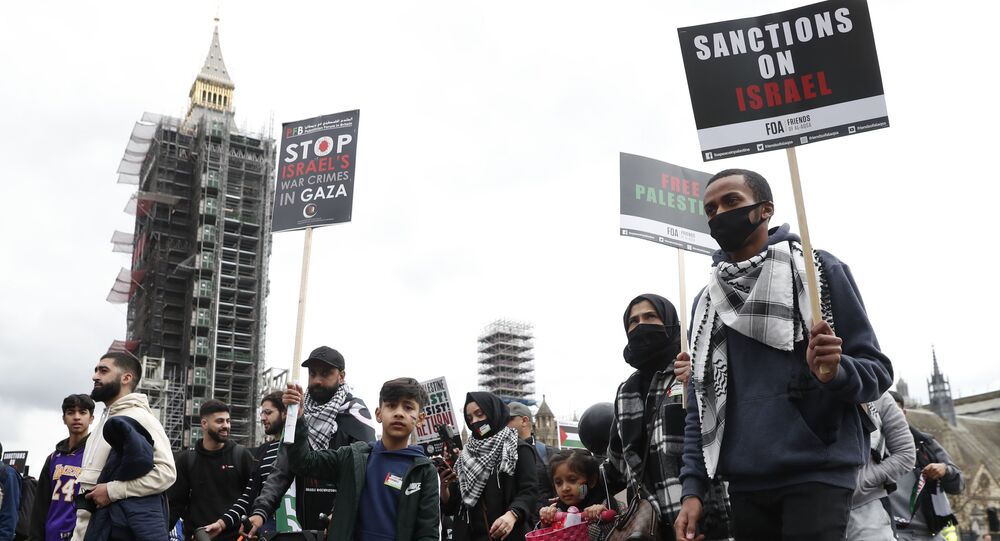 The protests are a response to the recent escalation in violence between Gaza-based Hamas militants and Israel that left 254 people in the Gaza Strip dead, as well as 13 people in Israel before an Egypt-brokered ceasefire was struck.

Detectives from the London Metropolitan Police are making inquiries as part of a "post-incident investigation" after a masked young man was filmed saying "We'll find some Jews here ... We want the Zionists, we want their blood!" during another weekend of pro–Palestinian protests in the English capital.

The incident took place during a demonstration near the Israeli Embassy in west London. Two officers were reportedly within earshot when the comments were made but took no action.

"The Met is aware of a number of clips on social media capturing antisemitic or offensive remarks during demonstrations across London on Saturday, May 22, and Sunday, May 23,” the police stated.

“The Met will never tolerate hate crime and this behaviour has no place in our city,” it added.

London is witnessing a second consecutive weekend of protests following the 11-day conflict on the Israel-Gaza border.

Several posters bearing slogans such as "Stop doing what Hitler did to you"; "Israel, the new Nazi state"; and "Holocaust Part 2" were seen during the protests.

Demonstrators also burned Israeli flags outside the country's UK embassy and vandalised a sports car with a traffic cone.