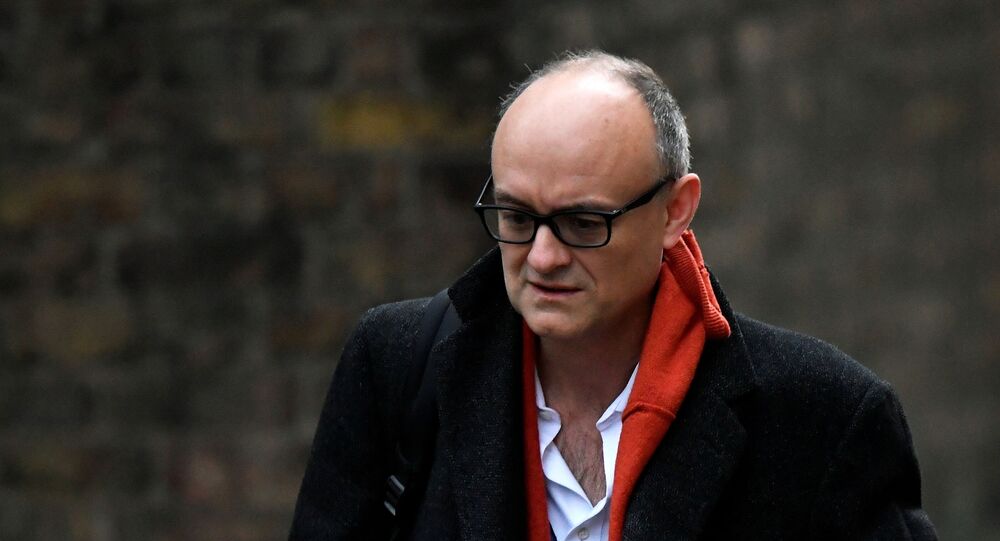 Upcoming parliamentary action in the UK is to be highlighted by the appearance of former chief adviser to Boris Johnson, Dominic Cummings, before a joint inquiry into decision-making pertaining to lockdowns, procurement, etc. in the early months of the COVID-19 pandemic by the Health and Social Care as well as Science and Technology committees.

Dominic Cummings, a British political strategist who served as chief adviser to Prime Minister Boris Johnson, is on course to give evidence to a joint committee of MPs about the government’s handling of the COVID-19 pandemic on Wednesday.

Johnson’s allies claim the ex-Brexit strategy guru is hell-bent on dredging up evidence to throw his one-time boss under the proverbial bus.

“He’s basically going to try and napalm him”, one source was cited by the outlet as saying.

Downing Street insiders suggest the driving force behind the ex-adviser’s actions is revenge over how he was ousted from his position last year. Johnson allies are cited as saying:

“When he left No 10 there was a tacit agreement that there would be a ceasefire. He doesn’t feel that it’s been offered . . . He feels he’s justified in going on the offensive”.

However, Cummings is anticipated to lay into Johnson, purportedly motivated by the wider public interest.

According to insiders, the former leading strategist of the UK’s Vote Leave campaign ahead of Brexit is going to argue that when Johnson repeatedly delayed announcing a lockdown in the country last year, the procrastination cost thousands of lives.

“He has his own values system and a stringent code. He wants to have the right information in the public domain so people can learn the lessons. He’s had a longstanding interest in improving the systems at the top of government”, a Johnson ally reportedly said of the motivation driving the ex-adviser’s actions.

However, there is believed to be a less conventional reason for the forthcoming damaging revelations that Cummings has already hinted at.

“He wants revenge… He thinks Boris is a clown who failed to learn the lessons of the first lockdown and even when we had all the data and knew what was going to happen he did nothing. He’s not going to stop. He’s not going to get bored. I don’t think he’ll stop until Boris is no longer prime minister”, another source was cited as claiming.

Cummings, appointed as a senior adviser to Prime Minister Boris Johnson on 24 July 2019, and described as the "de facto chief of staff", left quite controversially in November 2020, amid what some media called a “clear-out of Brexiteers” from Downing Street in the aftermath of a power struggle.

Cummings had also earlier been accused of breaching lockdown restrictions, after he travelled to his parents' farm in County Durham.

As for Boris Johnson, he is reportedly apprehensive of what his former chief strategist might have to say.
In April, the prime minister, in what is perceived as a pre-emptive strike, publicly accused Cummings of being behind a series of damaging leaks that made headlines.

These included a spate of controversial private messages and details of a refurbishment of Johnson’s flat above 11 Downing Street.

UK media seized upon the reports, claiming Tory coffers had helped cover the reported £200,000 ($277,400) cost of refurbishing the current residence of Johnson, his fiancée Carrie Symonds, and their son Wilfred.

The reports unleashed a torrent of cronyism and lobbying accusations targeting Johnson and his Conservative Party.

​After being blamed for the leaks, Cummings responded with a 1,000-word blog post to slam Johnson for “unethical, foolish, possibly illegal” behaviour in allegedly trying to get a Tory donor to fund the refurbishment of the flat.
Furthermore, this week, Cummings published a 29-message thread on Twitter to rail against the “joke” borders policy amid the coronavirus pandemic.

24/ The public inquiry will at no point ask: how does the deep institutional wiring of the parties/civil service program destructive behaviour by putting the wrong ppl in wrong jobs with destructive incentives? It will all be about relatively surface errors

20/ P Vallance & I supported opening up SAGE much earlier than it happened. I argued before 1st lockdown to open up the CODE of SPI-M models for scrutiny. Barrier = SW1 cultural hostility to openness & this barrier means SAGE still too closed & too little of its workings public

17/ The covid plan was supposed to be ‘world class’ but turned out to be part disaster, part non-existent. I urged inside Gvt to do a review of other contingency plans for more dangerous things than covid, a largely *open* process with e.g @wtgowers helping. Happening?

​The ex-adviser threatened he would be releasing a “crucial historical document” pertaining to Johnson’s handling of the health crisis.

According to the publication, Dominic Cummings has boasted of having at his disposal a trove of texts, emails, and WhatsApp messages from Boris Johnson, which the aforesaid committee is reportedly prepared to publish, as long as they are relevant to the inquiry.

'Let the Bodies Pile Up'

The criticism targeting Johnson and his government is expected to focus on the delay in implementing the first and second lockdowns in the UK. The nation witnessed the first coronavirus lockdown restrictions on 23 March.

© AP Photo / Kirsty Wigglesworth
A homeless person sleeps in front of a closed clothing shop in London, Thursday May 14, 2020, as the country continues in lockdown to help stop the spread of coronavirus

Cummings, along with others at 10 Downing Street, had reportedly wielded data that stated the case for a lockdown nine days earlier than eventually announced. However, those making the decision at the time had dismissed the figures presented as a “sh*tshow”.

Cummings has also denounced the delay in implementing a second lockdown as “catastrophic”.

At the time, Johnson was concerned that economic fallout from a lockdown, which he called “mad”, would outweigh the public health benefits.

Reluctantly, the PM imposed a second month-long lockdown in November, while reportedly warning at a government meeting that he would rather “let the bodies pile up in their thousands” than impose a third lockdown. While Johnson has since denied uttering these comments, sources claim that Cummings intends to confirm they were, indeed, made by the PM.

Matt Hancock, the health secretary, is also anticipated to come under fire from Cummings.

Speaking at a previous select committee appearance, the political strategist referred to the Department of Health as a “smoking ruin” for its policy of PPE procurement during the pandemic. According to the perceived failures of the department, the Vaccines Taskforce was forced to take over the procurement of vaccines.

According to insiders, Cummings is anticipated to denounce Hancock as having failed to measure up to the job, with his decisions ultimately costing lives.

As for the government’s strategy ahead of the possibly damaging revelations by Cummings, it will reportedly be one of not engaging with the ex-adviser, according to the outlet.

The decision to announce a public inquiry into the COVID-19 handling this month was purportedly made to offer Downing Street a way to dismiss any claims Cummings makes, a senior figure was cited as saying.

“The plan is to respond to whatever he says by pointing out that this is something the inquiry will be able to investigate. That was why we announced when we did”.

Meanwhile a YouGov survey carried out for the outlet shows that whatever Cummings might offer MPs on Wednesday, it will be treated with profound scepticism by voters. Only 14 percent of voters supposedly trust Cummings to tell the truth.

“Everybody assumes that he’s got something… He’s the master strategist right? But nobody knows for sure. Maybe his hand isn’t as strong as we think,” added one source.

Dominic Cummings Will Not be Prosecuted Over COVID-19 Lockdown Breaches, Media Claims