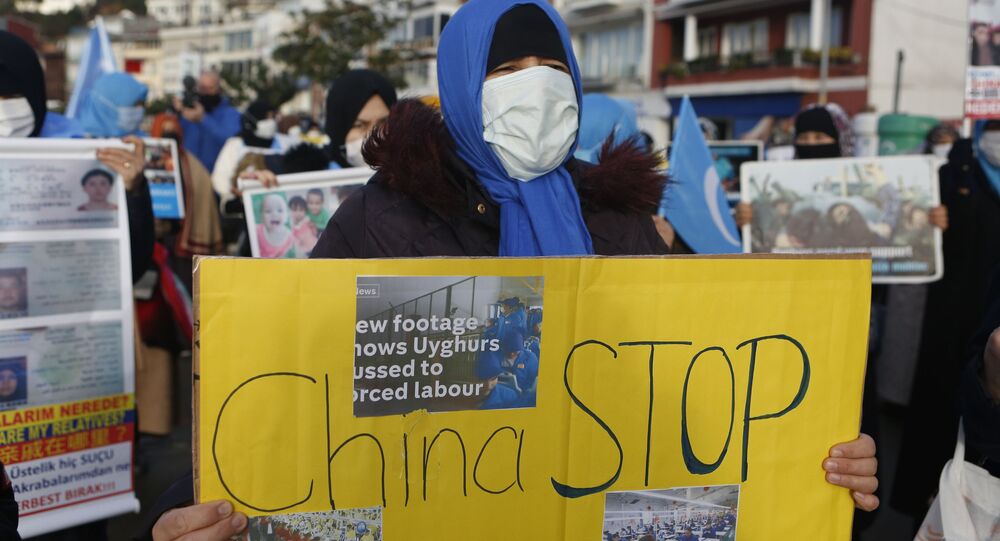 Situation in China's Xinjiang 'One of the Worst Human Rights Crises of Our Time', UK’s UN Envoy Says

Xinjiang is China's westernmost province and borders Mongolia, Kazakhstan and other former republics of the former Soviet Union in central Asia. The Uighur population is mostly Muslim and some Uighurs want an independent state they call East Turkestan.

Britain's ambassador to the United Nations, Dame Barbara Woodward, has called alleged abuses of China's Uighur minority in the Xinjiang region "one of the worst human rights crises of our time."

The US ambassador to the UN, Linda Thomas-Greenfield, also spoke out at the virtual event on Wednesday, 12 May, saying she would continue to raise the issue until China "stops its crime against humanity" and referred to the treatment of Uighurs as "genocide".

🇨🇳: we will build a $17 billion dollar water project to provide clean running waters to ethnic minorities in Xinjiang.

🇨🇦: Youre gonna have to sue us for billions to get any water or basics while we continue our genocide again your people. pic.twitter.com/x2pT8tANoV

​On Monday, 10 May, China's foreign ministry spokeswoman Hua Chunying said the use of the UN as a platform for the virtual event on the alleged repression of Uighurs was an "insult" to the institution.

She said: "The US has banded up with several countries, abused the United Nations' resources and platform, and smeared and attacked China to serve it's own interests. This is total blasphemy against the United Nations."

Later a US State Department offical, Daniel Nadel, said the Chinese government had turned Xinjiang into an "open air camp."

The Muslim Uighurs are now outnumbered by ethnic Han Chinese settlers who have moved into Xinjiang in the last 20 years.

Today @UN, Member States will ask for immediate access to #Xinjiang for the UN High Commissioner for Human Rights

Xinjiang has been accused of randomly detaining and torturing Uighurs in camps, a policy the US has described as genocide.

In January the US banned the import of cotton and tomatoes from Xinjiang amid allegations of forced labour.

In November the US removed the East Turkestan Islamic Movement (ETIM) from its list of banned terrorist organisations despite Chinese claims the group has been behind bomb attacks in China.

The State Department said: "ETIM was removed from the list because, for more than a decade, there has been no credible evidence that ETIM continues to exist."

US Secretary of State Antony Blinken has denied the G7 countries are trying "to contain China or to hold China down."