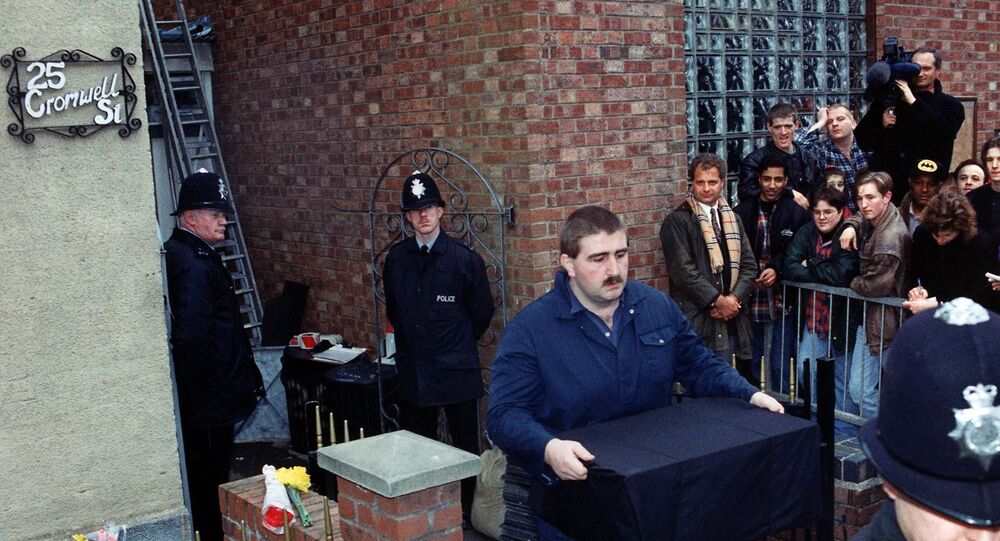 Britain has had its fair share of serial killers - from Jack The Ripper in 19th century London to the Moors Murderers in the 1960s. But one of the worst serial killers of modern times was Fred West, who murdered more than a dozen women and young girls.

Police in the English city of Gloucester have begun excavations beneath a cafe after a television crew filming a documentary said they may have discovered evidence of the body of one of serial killer Fred West’s victims.

​His first known victim was in 1967 and 20 years later his last known murder was that of his teenage daughter Heather.

The remains of their bodies - along with 10 other women and girls were recovered under West’s former homes in Gloucester in 1994 and in two fields near to his childhood home in nearby Much Marcle.

But Mary Bastholm, a 15-year-old girl who went missing in January 1968, has long been thought to have been a victim of West’s.

She vanished from a bus stop in Gloucester as she travelled to her boyfriend, carrying a Monopoly board game.

​On Tuesday, 11 May, Gloucestershire Police sealed off a cafe, The Clean Plate, in Southgate Street in the centre of Gloucester after a TV production company making a documentary there found possible evidence a body had been buried on the premises.

Assistant Chief Constable Craig Holden said: "On the basis of the information provided to us, we consider this to be new and potentially important evidence in the case of Mary Bastholm, however further detailed assessments will take place over the following few days to determine the extent of excavation needed.”

Geoffrey Wansell, who wrote a book about Fred West, told the BBC on Wednesday, 12 May, that Mary Bastholm fit the profile of the serial killer’s victims and added: “Fred would have considered her a tasty morsel.”

Frederick Walter Stephen West grew up in the village of Much Marcle, just across the county border in Herefordshire.

He suffered a head injury during a motorcycle accident in the 1950s, which is thought to have damaged his ability to empathise with his victims.

West worked as a builder and in the early 1960s he lived in Glasgow, where he married Rena Costello and had two children, Charmaine and Anne Marie.

The family moved to Gloucester in 1966 and one of Rena’s friends, Ann McFall, later joined them.

McFall, who was only 18, became Fred’s lover but in July 1967 she vanished after falling pregnant.

Rena returned to Glasgow and left her children with him, but she reappeared in 1971 when she confronted Fred and was killed.

​The bodies of Ann McFall and Rena Costello were found buried in Letterbox Field and neighbouring Fingerpost Field, near Much Marcle, in the spring of 1994.

Fred And Rose: An Evil Love

In 1969 Fred met 15-year-old Rosemary Letts - better known as Rose - and they soon became a couple, even though she was under-age.

The following year Fred, Rose and the two children moved into a house at 25 Midland Road in Gloucester, a property rented from a Roger Zygmunt, for whom Fred did a lot of building work. Rose then gave birth to another daughter, Heather.

In October 1970 Fred was jailed for stealing some car tyres and before he was released in June 1971 Charmaine was murdered by Rose and buried in the cellar, only to be discovered in 1994.

Fred and Rose bought a bigger house - 25 Cromwell Street - in 1972 and it was while they were living there that they carried out most of their appalling crimes.

The couple had an insatiable sexual appetite which included bisexual relationships for Rose and also sado-masochism and bondage.

But to outward appearances they were a harmless, hard-working couple - a builder and a housewife - who posed no threat to anyone.

The couple took to picking up hitch-hikers and bringing them back to their home and they also took in lodgers, who were always young women.

All these bodies were discovered either in the cellar or in the garden of 25 Cromwell Street - which was dubbed the House of Horrors by the press - in 1994.

The world was horrified by the revelations which emerged, which were made worse by the fact that Fred and Rose had nine children who all lived in the house at the time of the murders. The younger ones were later taken into care.

The murders stopped in 1979 but eight years later Heather West, by now 16, was also killed after she threatened to run away. Fred feared she might tell people what she knew about the bizarre events at the house.

She too was buried in the back garden.

Fred and Rose West were only arrested in the spring of 1994 after a dogged detective, Hazel Savage, picked up on talk among the Wests’ children - when they were being looked after by social services after the couple were charged with a sexual offence - that there was a body buried in the garden.

Fred and Rose West were due to go on trial together for 12 murders but he took his own life, apparently hoping it would allow her to walk free.

But in November 1995 Rose was convicted at Winchester Crown Court of 10 murders and was jailed for life and told she would never be freed. She is still in jail.